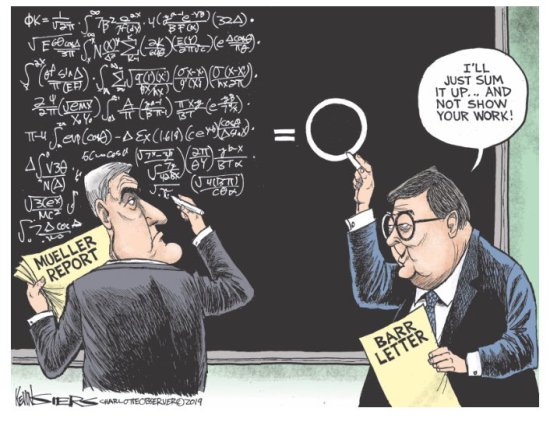 Once again, I hardly know where to begin. Yesterday Cover-Up General Barr made a complete ass of himself during his testimony to the Senate Judiciary Committee. Here’s a good summary of what happened from NBC News:

Just to put all of the news of Barr’s Senate testimony yesterday into one place, here are our seven highlights:

1. He said a president could replace an independent counsel if he thought in the investigation was unfair: “If the president is being falsely accused, which the evidence now suggests that the accusations against him were false, and he knew they were false, and he felt that this investigation was unfair, propelled by his political opponents, and was hampering his ability to govern, that is not a corrupt motive for replacing an independent counsel,” Barr said.

2. He admitted he didn’t review the underlying evidence in the Mueller report on whether Trump committed obstruction of justice: “We accepted the statements in the report as the factual record,” Barr said in an exchange with Kamala Harris. “We did not go underneath it to see whether or not they were accurately accepted as accurate. 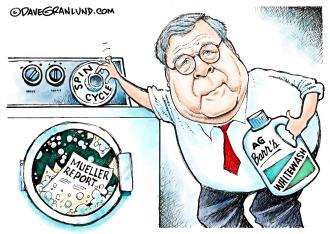 3. He indicated he didn’t read the full Mueller report or even its executive summaries: “Polling data was shared, sir,” said Cory Booker. “It’s in the report; I can cite you the page.” Barr responded, “With who?” (Answer: Paul Manafort shared polling data with Konstantin Kilimnik – revealed on page 7 of Mueller’s executive summary of Russia’s interference in the 2016 campaign.)

5. He said the Mueller report was his “baby” after Mueller submitted it: “At that point, it was my baby… It was my decision how and when to make it public.”

6. He said Mueller’s concern to him about his March 24 summary was inaccurate media reporting: “And I called Bob and said, you know, what’s the issue here? Are you — and I asked him if he was suggesting that the March 24th letter was inaccurate, and he said no, but that the press reporting had been inaccurate.” (But here’s Mueller’s letter complaining about Barr’s summary: It “did not fully capture the context, nature, and substance of this office’s work and conclusions.”

7. And/but he called Mueller’s letter “snitty”: “The letter’s a bit snitty, and I think it was written by one of his staff people.”

Afterward, he announced that he would refuse to attend a scheduled hearing before the House Judiciary Committee today.

Kamala Harris was the star of the show. Here’s her full examination of Barr in which she got him to stammer and stumble and finally admit he never looked at the evidence of Trump’s obstruction of the Russia investigation.

Here is the complete exchange, via CSPAN, between Kamala Harris and Bill Barr — including the part where Barr couldn't say whether Trump or anyone in the White House has ever suggested that he open an investigation into anyone. It's worth a watch. pic.twitter.com/wJOdSFR7JR

As noted in the NBC list, Cory Booker got Barr to admit that he didn’t know that Paul Manafort had shared internal polling data with Konstantin Kilimnik–who is connected to Russian intelligence services–indicating that Barr didn’t even read Mueller’s report or even the executive summaries! In fact, in his exchange with Nebraska Republican Ben Sasse, it appeared that Barr did not even know who Oleg Deripaska is!

I don’t think we fully realize the profundity of Barr’s assertions yesterday. The ideas that a president can determine whether or not he ought to be investigated or that a president is incapable of committing obstruction are not just outrageous assaults on Constitutional values. 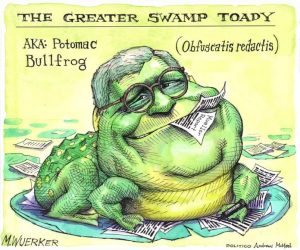 Taken in the context of this administration’s systematic rejection of the oversight role of Congress and of the law–whether it is the emoluments clause of Constitution or the obligation of the IRS to hand over tax returns to the Chairman of the Ways and Means Committee–what we are seeing is nothing less than a coup, to use a word the president has grown fond of. Trump and Barr are seeking to eliminate the checks and balances that are a hallmark of our system and to effectively render the Congress subservient to the presidency.

Combine this with the efforts of the Senate to load the courts with judicial candidates loyal to the president and the implication of McConnell, Graham & Co. that they will not fulfill their own Constitutional obligations, and you see a devastating picture.

Please click on the link and read the rest.

Some reactions to yesterday’s horror show

Many who watched Attorney General William Barr’s testimony on Wednesday before the Senate Judiciary Committee, which followed the revelation that the special counsel Robert Mueller had expressed misgivings about Mr. Barr’s characterization of his report, are despairing about the rule of law. I am not among them. I think the system is working, and inching, however slowly, toward justice.

When it comes to investigating a president, the special counsel regulations I had the privilege of drafting in 1998-99 say that such inquiries have one ultimate destination: Congress. That is where this process is going, and has to go. We are in the fifth inning, and we should celebrate a system in which our own government can uncover so much evidence against a sitting president…. 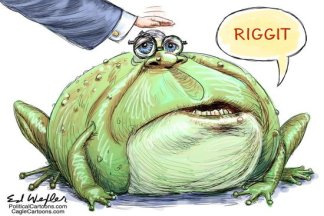 The underappreciated story right now is that we’ve not only learned that it was Mr. Barr — and pointedly not Mr. Mueller — who decided to clear President Trump of the obstruction charges, but also discovered the reasoning behind Mr. Barr’s decision. The American public and Congress now have the facts and evidence before them. The sunlight the regulations sought is shining.

Mr. Barr tried to spin these facts. He hid Mr. Mueller’s complaints, which were delivered to him in writing more than a month ago, even when Congress asked in a previous hearing about complaints by members of the special counsel’s team. And the four-page letter that Mr. Barr issued in March and supposedly described the Mueller report omitted the two key factors driving the special counsel’s decision (which were hard to miss, as they were on the first two pages of the report’s volume about obstruction): First, that he could not indict a sitting president, so it would be unfair to accuse Mr. Trump of crimes even if he were guilty as sin; and second, Mr. Mueller could and would clear a sitting president, but he did not believe the facts cleared the president.

Read the rest at The New York Times. I hope Kaytal is right; I’m having a little trouble being optimistic right now.

Greg Sargent: William Barr is helping to cover up Trump’s biggest crime of all. 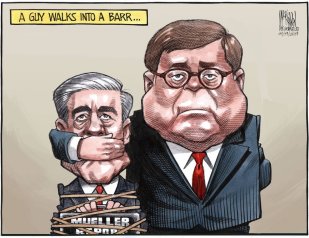 As the political world struggles to digest the enormity of Attorney General William P. Barr’s profound corruption of his role on President Trump’s behalf, it’s worth stepping back and surveying a distilled version of what we know, now that special counsel Robert S. Mueller III’s redacted report has been released:

The simplest way to understand much of what Barr has done — and what Trumpworld will be doing to impede inquiries going forward — is that it’s mainly aimed at obscuring the broad contours of that larger story.

The point here is not that everything they’re doing is deliberately aimed at this end. It’s that this bigger story is at the center of everything — and by “biggest crime of all,” I mean Trump’s most monstrous wrong — and thus efforts to keep smaller truths from coming out will inevitably be about obscuring that larger story.

Politico: Pelosi: Barr committed a crime by lying to Congress. 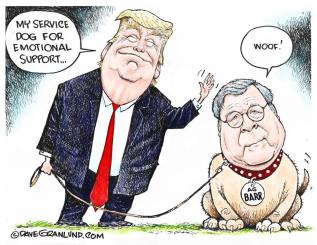 Speaker Nancy Pelosi on Thursday accused Attorney General William Barr of committing a crime by lying to Congress, blasting him in a closed-door meeting and later at a news conference.

“We saw [Barr] commit a crime when he answered your question,” Pelosi told Rep. Charlie Crist (D-Fla.) during a private caucus meeting Thursday morning, according to two sources present for the gathering.

“He lied to Congress. He lied to Congress,” Pelosi said soon after at a news conference. “And if anybody else did that, it would be considered a crime. Nobody is above the law. Not the president of the United States, and not the attorney general.“

Pelosi’s comments were an apparent reference to Barr’s response to Crist last month during a House Appropriations Committee hearing, during which the attorney generals aid he was not aware of any concerns that special counsel Robert Mueller’s team might have expressed about his four-page summary of Mueller’s findings.

The Washington Post: Hillary Clinton: ‘China, if you’re listening, why don’t you get Trump’s tax returns?’

EJ Dionne at the Washington Post: William Barr has shamelessly corrupted the debate over the Mueller report.

Benjamin Wittes at The Atlantic: The Catastrophic Performance of Bill Barr.

I expect there will be more news breaking today. What stories have you been following?