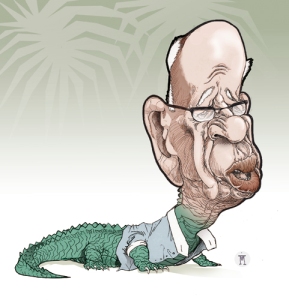 It’s a very cold Lundi Gras and I’m just grading and waiting for the frenzy to be over this time out. The usually quiet lead up days to Fat Tuesday are no longer quiet in my neck of the woods.. But, staying home and out of the way of the crazy means I get to see the crazy that corrupts our political system. We’ve all known that Fox News has had a toxic effect on the political environment pushing conspiracy theories and baldfaced lies as something other than what they are. Jane Mayer–writing for The New Yorker–has discovered they covered up the Stormy Daniels story prior to the election.  A Fox reporter knew the details and she was told to hide it. This story involves Bill Shine who is now sitting in the White House as a public official. Nothing in Trumplandia surprises me any more.  We just need to arrest the lot of them.

Shine led Fox News’ programming division for a dozen years, overseeing the morning and evening opinion shows, which collectively get the biggest ratings and define the network’s conservative brand. Straight news was not within his purview. In July, 2016, Roger Ailes, the co-founder and C.E.O. of Fox, was fired in the face of numerous allegations of chronic sexual harassment, and Shine became co-president. But within a year he, too, had been forced out, amid a second wave of sexual-harassment allegations, some of them against Fox’s biggest star at the time, Bill O’Reilly. Shine wasn’t personally accused of sexual harassment, but several lawsuits named him as complicit in a workplace culture of coverups, payoffs, and victim intimidation.

Shine, who has denied any wrongdoing, has kept a low profile at the White House, and rejects interview requests, including one from this magazine. But Kristol contends that Shine’s White House appointment is a scandal. “It’s been wildly under-covered,” he said. “It’s astounding that Shine—the guy who covered up Ailes’s horrible behavior—is the deputy chief of staff!” 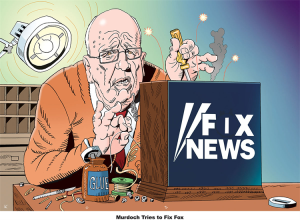 This is a really long read so I’ll take you to the punchlines.  The story winds between the sordid relationship between all the Fox personalities, the Fox News Management, and to what is clearly a movement to push Trump into office despite all appearances that Rupert Murdoch didn’t think much of him.

Fox’s embrace of Trumpism took some time. Sherman has reported that, when the network hosted the first Republican Presidential debate, in August, 2015, in Cleveland, Murdoch advised Ailes to make sure that the moderators hit Trump hard. This put Ailes in an awkward position. Trump drew tremendous ratings and had fervent supporters, and Ailes was afraid of losing that audience to rival media outlets. Breitbart, the alt-right Web site led by Stephen K. Bannon, was generating huge traffic by championing Trump. What’s more, Ailes and Trump were friendly. “They spoke all the time,” a former Fox executive says. They had lunch shortly before Trump announced his candidacy, and Ailes gave Trump political tips during the primaries. Ken LaCorte contends that Ailes took note of “Trump’s crazy behavior”; but Trump’s growing political strength was also obvious. According to the former Fox executive, Trump made Ailes “nervous”: “He thought Trump was a wild card. Someone Ailes could not bully or intimidate.”

Anthony Scaramucci, a former Fox Business host who was fleetingly President Trump’s communications director, told me in 2016 that the network’s executives “made a business decision” to give on-air stars “slack” to choose their candidates. Hannity was an early Trump supporter; O’Reilly was neutral; Megyn Kelly remained skeptical. Trump had hung up on Kelly after she ran a segment about his 1992 divorce from Ivana Trump, which noted that Ivana had signed an affidavit claiming that Trump had raped her. (Ivana later insisted that she hadn’t meant rape in the “criminal” sense.) 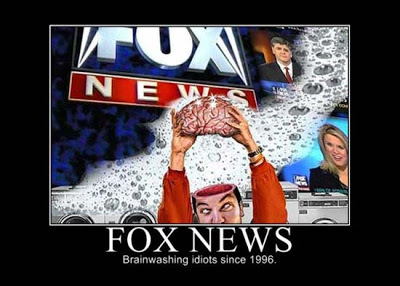 And so this …  And there will be a mic drop

When Shine assumed command at Fox, the 2016 campaign was nearing its end, and Trump and Clinton were all but tied. That fall, a FoxNews.com reporter had a story that put the network’s journalistic integrity to the test. Diana Falzone, who often covered the entertainment industry, hadobtained proof that Trump had engaged in a sexual relationship in 2006 with a pornographic film actress calling herself Stormy Daniels. Falzone had worked on the story since March, and by October she had confirmed it with Daniels through her manager at the time, Gina Rodriguez, and with Daniels’s former husband, Mike Moz, who described multiple calls from Trump. Falzone had also amassed e-mails between Daniels’s attorney and Trump’s lawyer Michael Cohen, detailing a proposed cash settlement, accompanied by a nondisclosure agreement. Falzone had even seen the contract.

But Falzone’s story didn’t run—it kept being passed off from one editor to the next. After getting one noncommittal answer after another from her editors, Falzone at last heard from LaCorte, who was then the head of FoxNews.com. Falzone told colleagues that LaCorte said to her, “Good reporting, kiddo. But Rupert wants Donald Trump to win. So just let it go.” LaCorte denies telling Falzone this, but one of Falzone’s colleagues confirms having heard her account at the time.

Despite the discouragement, Falzone kept investigating, and discovered that the National Enquirer, in partnership with Trump, had made a “catch and kill” deal with Daniels—buying the exclusive rights to her story in order to bury it. Falzone pitched this story to Fox, too, but it went nowhere. News of Trump’s payoffs to silence Daniels, and Cohen’s criminal attempts to conceal them as legal fees, remained unknown to the public until the Wall Street Journal broke the story, a year after Trump became President.

This tears at the very idea of a free press. They suppressed a story of the Republican Candidate for Congress committing a crime.  The Raw Story headline is more blunt: “Fox News spiked Stormy Daniels payoff story before the election: ‘Rupert Murdoch wants Donald Trump to win’.”  It’s enough to make you wanna say “Rosebud” over and over and over …

“In January, 2017, Fox demoted Falzone without explanation,” reports Mayer. “That May, she sued the network. Her attorney, Nancy Erika Smith, declined to comment but acknowledged that a settlement has been reached; it includes a nondisclosure agreement that bars Falzone from talking about her work at Fox.” 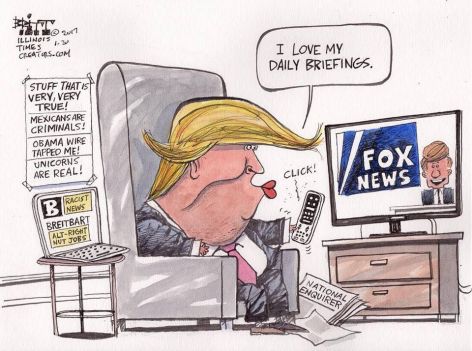 The second bomb shell is disturbing too.  I expect hearings galore from this one.  Vox explains: “Trump tried to kill the AT&T/Time Warner deal”.

Mayer’s story also reveals that from within the White House, Trump tried to push the Justice Department in the summer of 2017 to squash AT&T’s $85 billion acquisition of Time Warner.

Trump’s opposition to the deal was no secret — he criticized it as soon as it was announced, and his ongoing battle with CNN, which Time Warner owns, cast a heavy political shadow over the merger and the government’s objection to it. There have long been suspicions that Trump might try to intervene, and according to Mayer’s report, he did:

[I]n the late summer of 2017, a few months before the Justice Department filed suit [to block the deal], Trump ordered Gary Cohn, then the director of the National Economic Council, to pressure the Justice Department to intervene. According to a well-informed source, Trump called Cohn into the Oval Office along with John Kelly, who had just become the chief of staff, and said in exasperation to Kelly, “I’ve been telling Cohn to get this lawsuit filed and nothing’s happened! I’ve mentioned it fifty times. And nothing’s happened. I want to make sure it’s filed. I want that deal blocked!”

Cohn, a former president of Goldman Sachs, evidently understood that it would be highly improper for a President to use the Justice Department to undermine two of the most powerful companies in the country as punishment for unfavorable news coverage, and as a reward for a competing news organization that boosted him. According to the source, as Cohn walked out of the meeting he told Kelly, “Don’t you fucking dare call the Justice Department. We are not going to do business that way.”

The government eventually lost its lawsuit to block the deal in court.

There are legitimate reasons to be skeptical about the AT&T/Time Warner merger. As Vox’s Matt Yglesias explained, other lawmakers opposed it, including Sens. Mike Lee (R-UT) and Amy Klobuchar (D-MN), top members on the Senate’s antitrust committee. And Comcast’s merger with NBCUniversal, a similar deal, has had some negative effects.

But the president isn’t supposed to weigh in on antitrust enforcement in order to exact some sort of revenge plot on a perceived enemy — in this case, CNN. And Trump isn’t some media monopoly skeptic; he reportedly congratulated Murdoch about 21st Century Fox’s deal to sell its entertainment assets to Disney.

So, Roger Ailes gives Trump debate questions in advance. Fox editor buries Stormy Daniels story in 2016 that would've hurt Trump in the general, uses a nondisclosure as a shield to stop the reporter.

This should should disqualify Fox News from hosting 2019-2020 debates. https://t.co/Clx0Hf72LK

It’s hard for me to move beyond this story today. It’s like a compilation of all the things the Republican party has done recently to make this a full throttle banana republic kleptocracy.  And of course, there’s this …

Rupert Murdoch is apparently even closer to Jared Kushner than he is to Trump, speaking to him on almost a daily basis. pic.twitter.com/NUhFndgtzm

Well, I’m pretty sure this is going to be on all the news networks–with the exception of Faux Fucked up News–today.

There’s other headlines out there.  Please share them down thread.  I’m going back to grading.