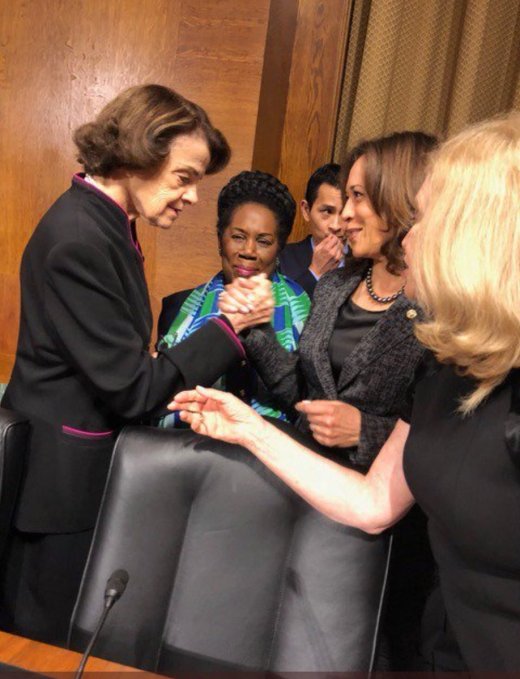 And for once it really is a good morning. I slept well last night for the first time since the news that Trump’s SCOTUS nominee Brett Kavanaugh sexually assaulted women in high school and college. I just hope the FBI investigation will be a thorough and serious one.

Aside from the sexual assault accusations, the investigators must look into Kavanaugh’s drinking habits. As most of you know I am a recovering alcoholic (sober 37 years now), so I speak from experience when I say that Kavanaugh displays all the behavioral hallmarks of an active alcoholic. For example, he is inappropriately defensive–even belligerant–when asked about his drinking; at the same time, he can’t stop talking about it how much he likes beer. Of course, I’m not alone in noticing this.

Robin Abcarian at The Los Angeles Times: Was I the only one who shuddered at Brett Kavanaugh’s belligerent comments about beer?

Like a lot of people who have lived with or been friends with people who love beer a little too much, I experienced some familiar, unpleasant emotions as I watched the Supreme Court nominee’s behavior disintegrate Thursday in his Senate Judiciary Committee hearing….

Once senators started to question him, his high dudgeon, which was defensible, turned into something darker and far more revealing about who he is: a political operative who had the great good fortune to be named as judge to a court that is a proving ground for future Supreme Court justices. Someone, it became clear, who likes beer, but does not want to be asked about drinking. In fact, he mentioned some version of liking beer at least 12 times, according to the hearing transcript…. 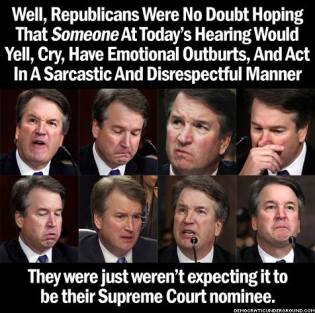 When Kavanaugh was asked by Rachel Mitchell — the prosecutor hired by committee Republicans to keep the proceedings civil — whether he consumed alcohol during high school, he could have simply said “Yes.”

When Democratic Sen. Sheldon Whitehouse asked him whether the phrase “Ralph Club” in his high school yearbook referred to vomiting related to drinking, Kavanaugh could not even bear to entertain the question. He could have simply said “Yes.” Most people know that “ralphing” is a side effect of over-consumption.

Instead, he obfuscated. “Senator, I was at the top of my class academically, busted my butt in school. Captain of the varsity basketball team. Got in Yale College. When I got into Yale College, got into Yale Law School. Worked my tail off.”

“And did the word ‘ralph’ … refer to alcohol?” Whitehouse asked.

More examples at the link.

Aside from his denial and defensiveness, Kavanaugh demonstrates what people in the recovery community call an alcoholic personality. It’s difficult to explain what I mean by that, but anyone who has been close to an active alcoholic would see it in Kavanaugh. He appears to be a high functioning alcoholic, and because he has been enabled all his life by the people around him he may never before been challenged publicly in the way he was on Thursday. But I’d bet any amount of money that the people close to him have been exposed to his alcoholic behavior. Frankly, as I watched Kavanaugh’s shocking performance on Thursday, I wondered if he might have been drinking before the hearing.

Alcohol affects the brain and changes the way we think. Excessive drinking can affect behavior even when the person is not under the influence. It affects your entire personality and prevents you from becoming a fully functioning adult. Based on Kavanaugh’s performance on Thursday, I think he hasn’t matured that much emotionally since high school because he has been drinking heavily for a long time. Another alcoholic characteristic Kavanaugh demonstrates is his inability to be honest with himself and other people. There is no way a man like this should be a judge on any court, much less the Supreme Court.

Kavanaugh’s testimony on Thursday also called into question his judicial temperament and whether he could be impartial. Alan Liptik at The New York Times: A Bitter Nominee, Questions of Neutrality, and a Damaged Supreme Court.

His performance on Thursday, responding to accusations of sexual misconduct at a hearing of the same Senate committee, sent a different message. Judge Kavanaugh was angry and emotional, embracing the language of slashing partisanship. His demeanor raised questions about his neutrality and temperament and whether the already fragile reputation of the Supreme Court as an institution devoted to law rather than politics would be threatened if he is confirmed

“This whole two-week effort has been a calculated and orchestrated political hit,” he said, “fueled with apparent pent-up anger about President Trump and the 2016 election, fear that has been unfairly stoked about my judicial record, revenge on behalf of the Clintons and millions of dollars in money from outside left-wing opposition groups.” [….]

The charged language recalled Judge Kavanaugh’s years as a partisan Republican, working for Ken Starr, the independent counsel who investigated a series of scandals involving Bill and Hillary Clinton, and serving as an aide in the administration of George W. Bush. It was less consistent with the detached judicial temperament that lawyers associate with an ideal judge.

All of this, said Judith Resnik, a law professor at Yale, was “partisan and not judicious.” Judge Kavanaugh’s confirmation in the wake of his performance, she added, could leave the Supreme Court “under a cloud of politics and scandal from which it would not recover for decades.”

“Every bit of research ever done on the subject concludes that judges are human beings with emotional reactions that influence how they decide cases,” said Jeffrey J. Rachlinski, a law professor at Cornell.

“This process clearly has ignited a passionate reaction in Judge Kavanaugh that will doubtless influence him for the rest of his life,” Professor Rachlinski said. “Research on how emotions influence judges suggests that he will be unable to set this experience aside when deciding cases involving relevant subjects or parties who are closely aligned with those he has today treated as personal enemies.”

Eric J. Segall, a law professor at Georgia State, said Thursday’s hearing both illuminated Judge Kavanaugh’s political outlook and was likely to affect his voting on the Supreme Court if the Senate confirms him.

“His time in the executive branch and his work for Starr suggested he was one of the most partisan nominees in a long time,” Professor Segall said.

Read the rest at the NYT. Based on his history, Kavanaugh would likely use his seat on the Supreme Court to enact revenge on Democrats and on women. 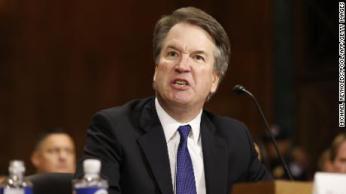 But what about the reopened background investigation? The FBI will likely investigate Christine Blasey Ford’s accusations against Kavanaugh first. The Los Angeles Times asked former FBI agents about what clues they saw in the public testimony.

Former FBI officials expressed confidence Friday that agents could quickly interview key witnesses and track down potential leads into Christine Blasey Ford’s allegations that Supreme Court nominee Brett Kavanaugh sexually assaulted her when they were both high school students in the early 1980s.

“There is plenty of lead value in the testimony that was provided during the confirmation hearing and there are plenty of living witnesses that can be identified, contacted and interviewed,” said James McJunkin, a former top FBI official. “They can do this fairly quickly.”

Information from the hearing could provide “crumbs agents could follow,” said Bobby Chacon, a former FBI agent who retired in 2014. “There might less than a handful of interviews they may want to do and follow up.”

Ford’s dramatic testimony and details scrawled on the calendars Kavanaugh said he kept from the summer of 1982, when Ford believes the alleged assault occurred, offered promising lines of inquiry, the former officials said.

Among other clues, Ford provided the names of several potential witnesses to her account, including two classmates of Kavanaugh’s at Georgetown Preparatory School in the Washington suburbs.

The personal calendar that Kavaugh provided also contains many clues.

Former agents noted that Kavanaugh’s calendar entries from 1982 could help provide timelines and additional witnesses. They noted, for example, a calendar entry on July 1 of a party with several friends, including Judge and Smythe. 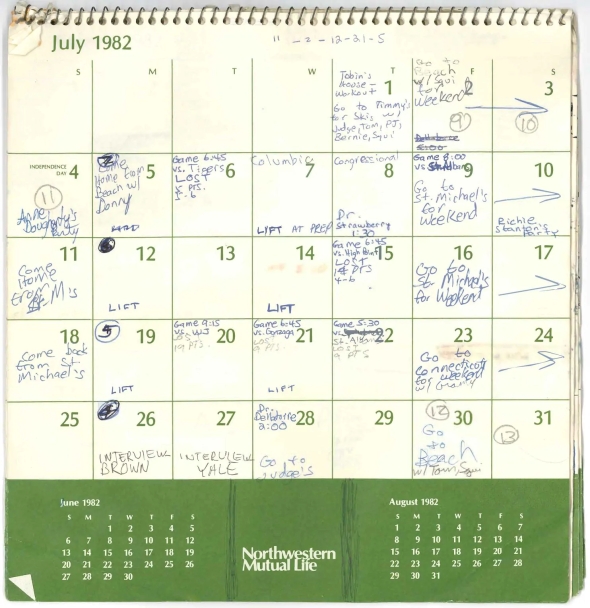 It seems likely that the calendar will be a rich source of names and other information. Many people have focused on the July 1 entry. Philip Bump wrote out it at The Washington Post: Kavanaugh is pressed on the key July 1 entry in his calendar. But only to a point.

Rachel Mitchell, hired by the Republican majority of the Senate Judiciary Committee to navigate the questioning of Kavanaugh and Ford, pointed to one particular calendar entry that got some attention after the calendars came out. It read:

The reference to “skis” is apparently to “brewskis,” or beers. The entry was July 1, a Thursday. Mitchell asked him about it.

MITCHELL: The entry says, and I quote, go to ‘Timmy’s for skis with Judge, Tom, P.J. Bernie and … Squi?’

MITCHELL: To what does this refer, and to whom?

KAVANAUGH: [after explaining the “Tobin’s House” part] It looks like we went over to Timmy’s. You want to know their last names, too? I’m happy to do it.

MITCHELL: If you could just identify: Is ‘Judge’ Mark Judge?

Notice two things here. First, that “Squi” was in attendance at the party — someone who, we learned thanks to Mitchell’s questioning of Ford, was going out with Ford over the course of that summer. Second, notice those two other attendees, one of whom Mitchell highlighted: Mark Judge and P.J. Smyth.

Not too long after this, Lindsey Graham began yelling and screaming and Rachel Mitchell was erased from the hearing. Certainly FBI agents will want to talk to Tim Gaudette, whose home the boys planned to go for beer and Chris Garrett who was Ford’s connection to Kavanaugh.

It’s also interesting that the day of the party was the Thursday before the long Fourth of July weekend, so it wasn’t just an ordinary weekday (Kavanaugh claimed that he and his friends only drank on weekends.) And is there any connection here to the FFFFFourth of July entry in Kavanaugh’s yearbook?

I assume reporters will be following up on these clues even if the FBI doesn’t. It’s going to be an interesting week.