It’s Monday and we continue to see the enabling of the worst of America.  Today, two Democracies with Presidents under criminal investigation are using religious fanaticism to destroy peace and life.  Israel is an apartheid state. It uses its military to gun down protesters. We continually enable them to commit mass genocide on the indigenous peoples of what used to be Palestine.  I’m ashamed that my country has this administration which takes deliberately provocative foreign policy actions and endangers world peace.

The Israeli military has killed 44 Palestinians protesting along the border fence that keeps them in a massive walled up Ghetto which should strike some historical irony considering this is what Hitler’s Germany did to Jewish areas in Europe. They considered young men throwing stones to be of danger. Despite considerable protests from diplomatic circles around the world and in this country, KKKremlin Caligula kept billionaire Republican donor Sheldon Addison happy along with a bunch of whack-a-do Xtian End-Timers and moved the US Embassy to Jerusalem.

Israeli soldiers on Monday killed 41 Palestinians demonstrating along the border fence between Israel and the Gaza Strip and wounded more than 1,600 in the bloodiest day in the enclave since the 2014 war with Israel, according to the Gaza Health Ministry.

Thousands of Palestinians gathered on the edges of Gaza as the U.S. Embassy opened in Jerusalem, fanning out along the fence in what appeared to be some of the largest demonstrations yet.

At a gathering point east of Gaza City, organizers urged demonstrators to burst through the fence, telling them Israeli soldiers were fleeing their positions, even as they were reinforcing them.

At the barrier, young men threw stones and tried to launch kites carrying flames in hopes of burning crops on the other side. Most of the demonstrators, though, were peaceful, protesting the loss of their homes and villages and the embassy move.

Occasional sporadic gunfire could be heard over the noise of the crowd, and a constant stream of ambulances roared back and forth from the fence, ferrying away the wounded.

Theocratic Fascism is on the march. ‘Trump Make Israel Great’ banners hung through Jerusalem. Well, that adds them to the list of Trump making Russia, China, and North Korea great again.  And, as I’m sure Boston Boomer will write tomorrow, you feed the coffers of the Trump family crime syndicate, US policy will enable you to do whatever you want.

Israelis see the ancient city as their capital — sentiments Trump echoed in December with his decision to relocate the U.S. Embassy there — while Palestinians view East Jerusalem as the capital of a future Palestinian state.

The international community, however, has traditionally viewed Tel Aviv as Israel’s capital.

The new embassy has also been celebrated by Jerusalem’s soccer club, which has sought to change its name to “Beitar Trump Jerusalem.”

At least 43 Palestinians were killed by Israeli forces & almost 1,960 others were wounded after thousands of protesters converged on the fence between Gaza & Israel as the US Embassy opened in Jerusalem. Earlier, we spoke with city residents about the move https://t.co/ANVxxPEMar pic.twitter.com/e2RnGxpcsE

Oh, just to reference how bribing the President works:

If you haven’t heard about the Qatar deal yet, just wait.

But back to the crazy whack-a-do Xtian pastors celebrating the End Times over there in Jeruseleum.  These guys are certifiable and they belong to the same bowl of nuts that contains Mike Pence and Mike Pompaio, and Besty DeVos.  This is from Haartez because I’m not anti-Israel.I’m anti-Holocausts in the name of religious extremism. Trump smells easy marks and knows how to make them zombies in the cause of enriching Trump like, say, Joel Orsteen or Franklin Graham.

One of the speakers at Monday’s ceremony marking the relocation of the U.S. Embassy to Jerusalem will be a Christian leader with a history of hateful comments against Muslims, Mormons, gay people and Jews.

Dallas-based Robert Jeffress, a Baptist pastor with a large following in Texas, told Fox News that he would be leading a prayer during the ceremony. Jeffress serves as an informal advisor to Trump on faith-based issues of U.S. President Donald Trump, and is also known for his support for Prime Minister Benjamin Netanyahu’s government.

Jeffress once said that “the dark dirty secret of Islam” is that “it is a religion that promotes pedophilia,” and that Islam is “a heresy from the pit of hell.”

Mitt Romney, a former Republican presidential candidate, called on Monday to remove Jeffress from his participation in the embassy opening ceremony. Romney, one of the most prominent Mormon politicians in the United States, said Jeffress was a “religious fanatic” and accused him of incitement against religious minorities. “Such a person should not lead the service at the opening of the embassy in Jerusalem,” added Romney, who is currently running for an open Senate seat from Utah despite his clear identification with the Republican Party. He is considered one of President Trump’s critics in the party. 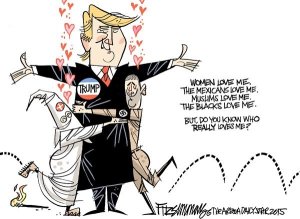 The other one is frankly worse.

Monday’s ceremony marking the relocation of the US Embassy in Israel to Jerusalem will break with tradition in more ways than one.

Besides the political concerns over the move itself, a pair of Christian evangelical leaders will be on hand whose words have caused their own share of controversy.

Pastor John Hagee, the founder of Christians United for Israel, will deliver the benediction at the ceremony, a spokesman for his organization confirmed to CNN. A major proponent of the embassy move, Hagee said in a recent interview with conservative news site Breitbart that he told President Donald Trump he would win “political immortality” for moving the embassy from Tel Aviv.

“I told him that the moment that you do that, I believe that you will step into political immortality,” the news site quoted Hagee as saying. “Because you are having the courage to do what other presidents did not have the courage to do. 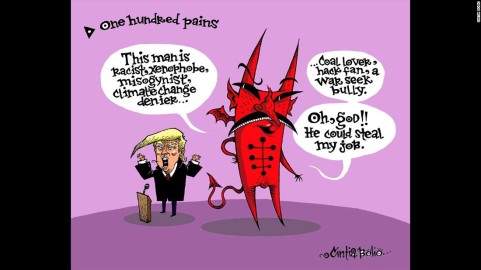 So, let’s look again at which big Republican donor has been after this forever and what exactly he just did with Paul Ryan. It’s true.Religious Fanatics come in all flavors but they are especially dangerous when they have the capability to do this.

‘Sheldon Adelson kicks in $30M to stop Democratic House takeover. The donation to the Congressional Leadership Fund is a big boost to Republicans facing a tough midterm environment.’  I keep wondering if he knows these evangelicals want all these blessings for Israel right now so they’ll rebuild the Temple only to exterminate every one for miles around. I guess the key is to keep promising and never delivering on that Temple thing.

The long-sought donation was sealed last week when, according to two senior Republicans, House Speaker Paul Ryan flew to Las Vegas to meet with the billionaire at his Venetian Hotel. Also at the meeting with Adelson was his wife, Miriam; Norm Coleman, the former Minnesota senator who chairs the Republican Jewish Coalition; Corry Bliss, who oversees the super PAC; and Jake Kastan, Ryan’s No. 2 political aide. They laid out a case to Adelson about how crucial it is to protect the House.

As a federally elected official, Ryan is not permitted to solicit seven-figure political donations. When Ryan (R-Wis.) left the room, Coleman made the ask and secured the $30 million contribution.

CLF did not respond to requests for comment. The contribution will become public later this month in the organization’s campaign finance filing.

Coleman said he would not discuss his dealings with Adelson.

Adelson’s donation comes at a perilous moment for House Republicans, who are facing growing headwinds as they try to save their majority. With dozens of incumbents being outraised by emboldened Democratic challengers, desperate party officials have been hoping that Adelson — the party’s most prominent benefactor — would give more than he traditionally does, and earlier in the election cycle.

I just wonder what Trump’s NAZI buddies think of all of this.  We do know what Tehren thinks via The Times of Israel.

Iran denounced President Donald Trump as “feeble-minded” over Monday’s controversial move of the US embassy to Jerusalem, and called for resistance from the Palestinians and the international community.

“America has entered a crisis of strategic decision-making that looks at the international arena immaturely and adventurously,” said parliament speaker Ali Larijani, a key establishment figure, at a conference on the Palestinian situation in Tehran.

“I believe the current US president is not capable of identifying and judging the long-term consequences of his actions,” he added.

“Spur-of-the-moment and uncalculated actions cannot continue in today’s world. Feeblemindness is costly for statesmen and they will eventually have to pay the price,” Larijani said.

A guy who has a lower security clearance than the White House calligrapher, just opened the US embassy in Jerusalem.

I support Jewish Voice for Peace.

Jewish Voice for Peace opposes anti-Jewish, anti-Muslim, and anti-Arab bigotry and oppression.  JVP seeks an end to the Israeli occupation of the West Bank, Gaza Strip, and East Jerusalem; security and self-determination for Israelis and Palestinians; a just solution for Palestinian refugees based on principles established in international law; an end to violence against civilians; and peace and justice for all peoples of the Middle East.

It’s just really difficult to fully understand the impact this will have on people here and around the world. I guess if you’re rich and powerful and open to taking bribes or doing anything, you really don’t have to care.  The Buddha once told stories to get people to understand the results of their actions.  It was later picked up on by the Jesus that most of these yehaws profess to understand. It’s meaningful at all levels of life.  Be care of of what you sow because you will reap it.  Karma baby!