The next two Tuesdays will provide returns from the nation’s Coal Country.  Exit Polls are available from today’s Democratic Primary in West Virginia.  West Virginia is one of the nation’s white, working class strongholds.

The following is reportable as “preliminary” exit poll results from the West Virginia Democratic primary. Please note that exit poll results can and do change as additional data come in – sometimes substantially. Check back for updates.

The highest level of economic concern in any Democratic primary this year and greater-than-usual turnout among men, whites, political independents and critics of President Obama characterized Hillary Clinton’s challenges in the West Virginia primary, her overall lead in delegates notwithstanding.

Extraordinary economic stress in the state was evident in preliminary exit poll results:

• Six in 10 voters said they were very worried about the direction of the nation’s economy in the next few years, by far the highest level of economy worry in a Democratic primary this year – far above the average, 40 percent, and rivaling the customary level seen in Republican primaries.

• Nearly six in 10 said the economy and jobs was the most important issue in their vote, again by far the highest in any Democratic contest this year.

• A majority in the state thought trade with other countries takes away more U.S. jobs than it creates, vs. only a little more than a third who said it creates more jobs. The division has been much closer, 45-39 percent, in previous states where the question has been asked.

These economically aggrieved voters not only were far more numerous in West Virginia than in other Democratic primaries, they also were much more supportive of Bernie Sanders here than elsewhere. Among anti-trade voters and those very worried about the economy, more than six in 10 voted for Sanders, according to preliminary exit poll results, as did a majority of those focused on the economy and jobs.

Coal workers: The state’s depressed coal industry is a key reason for its economic woes, and three in 10 West Virginia Democratic primary voters said there was a coal worker in their household. Perhaps reflecting Clinton’s gaffe about creating jobs “because we’re going to put a lot of coal miners and coal companies out of business,” more than six in 10 of these coal household voters went for Sanders.

Race: West Virginia also was a tough state for Clinton demographically. Whites accounted for nine in 10 primary voters in preliminary exit poll results, far above the 61 percent they’ve averaged across the 2016 Democratic primaries. And the exit poll indicated that Sanders did better among whites in West Virginia than his even split with Clinton in this group in previous contests.

Gender: Women have outnumbered men by 58-42 percent overall in previous contests, a tremendous boost to Clinton – but in West Virginia, the advantage in turnout among women was smaller. Sanders also outperformed his usual numbers among women.

Party: Completing the demographics trifecta, political independents accounted for a third of voters in West Virginia in preliminary exit poll results, well above the average to date, 22 percent. Sanders took seven in 10 of these voters, slightly better than usual.

Obama: Further, only about quarter of Democratic primary voters in West Virginia said they wanted next president to continue Obama’s policies, a key group for Clinton to date; that compares with 54 percent on average in previous contests this year. An additional quarter wanted more liberal policies, and four in 10 wanted less liberal policies, roughly three times the average this year. Both non-Obama groups favored Sanders in today’s primary.

Twenty-nine delegates are at stake in today’s primary on the Democratic side.  Bernie Sanders has been projected to win 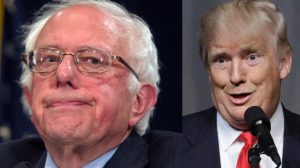 the state but will not make any substantial progress in delegate count.

Thirty-four delegates are at stake in today’s primary on the Republican side in West Virigina.  Donald Trump is the projected winner there. Donald Trump is technically the remaining candidate but we there are other’s on the ballot and we do have this news.  Nebraska (sigh, it figures) might reinvigorate Cruz.  Nebraska Republicans also vote today.

Ted Cruz floated the possibility of restarting his presidential campaign if he wins Nebraska’s GOP primary on Tuesday and avoided saying whether he supports Donald Trump‘s bid for president.

So, join us for the analysis and pundit-bashing!!!