We’re heading into a heat wave here in the Boston area. It’s supposed to be hot and humid for the next few days with temps in the high 80s or low 90s. It will be a shock to my system, since it has been rather chilly here recently.

I’m going to focus on the ongoing Boston bombing story again, but you can treat this as a regular morning reads post/open thread. Don’t feel you have to comment on this topic. I haven’t paid much attention to other news for a few days, so I hope you’ll update me on the latest news in the comment thread!

A week ago, I wrote a post about the death of Ibragim Todashev, who was shot and killed in an apartment in Orlando, FL by an FBI agent from Boston in the early hours of Wednesday May 22. Todashev was being questioned by representatives of the FBI, the Massachusetts State Police, and “other law enforcement personnel” about his relationship with deceased Boston bombing suspect Tamerlan Tsarnaev and possible connections to an unsolved 2011 triple murder in Waltham, Massachusetts. Todashev had reportedly been questioned for hours on Tuesday and was shot shortly after midnight. The FBI had been following him for about a month, calling him daily and questioning him on several different occasions.

At the time I wrote that post, there was a great deal of confusion about the circumstances of the shooting and that confusion has only increased during the past week. At first, anonymous law enforcement sources claimed Todashev had been killed after he attacked the agent with a knife. By he next day sources were walking back that claim, some saying Todashev had something in his hand but it wasn’t a knife, others suggesting it was a pipe or something similar.

I’ve been following this story closely, and I’ve never seen anything like it. Presumably, the events in question were fairly straightforward. A man was shot dead with at least four–perhaps more–law enforcement officers present. How hard would it be to figure out if the dead man had a knife in his hand or not? Something was obviously not right. 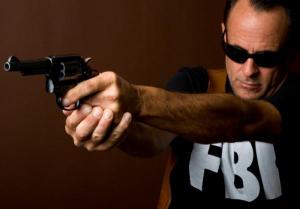 During the past week, the reported details of the Todashev shooting have continued to change. On May 25, the Boston Globe offered a new version of events, again based on anonymous sources.

An FBI agent from the bureau’s Boston office fired the shot, or shots, that killed a friend of Boston ­Marathon bombing suspect ­Tamerlan Tsarnaev early Wednesday morning during an interview about an unsolved Waltham homicide, say officials briefed on the investigation.

Ibragim Todashev, a 27-year-old mixed martial arts fighter formerly from Allston and Cambridge, was shot in the kitchen of his apartment after overturning a table and attacking the agent with a blade, the officials said. The Globe has ­reported that the shooting came after Todashev had implicated himself in a grisly 2011 triple homicide in Waltham. ­Tamerlan Tsarnaev was friendly with one of the Waltham victims, and authorities suspect he may also have taken part in the slayings.

Two law enforcement officials said that the Boston FBI agent felt he was in grave danger when Todashev attacked him and that he fired in self-defense.

“This was a tough guy; he was a dangerous individual,” one law enforcement official said, speaking of Todashev. The official asked not to be named because the official was not ­authorized to discuss the case.

Okay, but with at least four trained law enforcement officers present, why was it necessary to kill a potentially valuable witness? Is it really credible that they couldn’t control one not very large (about 5’8″) man?

Yesterday morning there was another version. In this one, first reported by Fox Boston, Todashev not only knocked over a table, but also slammed the FBI agent’s head into a wall and attacked him with a sword. Yes, a sword. As in previous stories, the claim was that Todashev had been about to sign a confession about his involvement in the Waltham murders when things got out of control.

During the interview, investigators took notes and everything appeared to be going well. Eventually, Todashev was asked to write down, in his own handwriting and in his own words, what he had been telling authorities about his role in the murders when in the words of one source – all hell broke loose.

Todashev allegedly began writing, but then flipped a table over, knocking the Boston FBI agent into the wall hitting his head.

FOX 25’s Bob Ward was told the agent looked up to see Todashev waving in his direction what was described as a Banzai ceremonial sword.

Fearing for his life, the FBI agent drew his weapon and fatally shot Todashev. The entire incident taking only seconds.

During the course of the day, the story continued to change as more anonymous “sources” weighed in. WESH Orlando’s “sources” told a slight different tale than Fox Boston’s.

Sources said Todashev might have been lunging toward a sword, but he was not in possession of it.

Law enforcement officials said Todashev was in the process of confessing to a 2011 triple murder in Waltham, Mass., and was working on writing out the details of the crime when he snapped and turned violent.

Sources said a sword was inside the apartment, but the weapon was moved to the corner of the room before questioning began. Law enforcement said when Todashev lunged, the FBI agent believed he could have possibly been going for his gun or the sword in the room, and that’s when the agent opened fire.

Because of course the best law enforcement technique is to move any sharp objects to the corner of the room before questioning a suspect? WTF?!

Finally, last night several news outlets–among them The Washington Post–reported that Todashev had been unarmed when he was shot.

One law enforcement official, speaking on the condition of anonymity to discuss an ongoing investigation, said Wednesday that Todashev lunged at the agent and overturned a table. But the official said Todashev did not have a gun or a knife. A second official also said Todashev was unarmed.

An official said that according to one account of the shooting, the other law enforcement officials had just stepped out of the room, leaving the FBI agent alone with Todashev, when the confrontation occurred.

The shooting followed hours of questioning by the law enforcement officials that had begun the night before.

And exactly why did the other officers “step out of the room?” The source doesn’t say.

This story is becoming just plain ridiculous, and as Emptywheel wrote yesterday, it makes the FBI look just plain stupid. Last night on twitter, someone compared it to the old “Get Smart” recurring bit, “Would you believe…”

But as ridiculous as this story seems, we need to understand that something like this could happen to any one of us. A man was killed in an apartment with multiple law enforcement officers present, and after more than a week, we still don’t know for sure what happened.

At 7PM yesterday, the Florida chapter of the Council on Islamic-American Relations (CAIR) held a press conference with Todashev’s wife, her mother, and a close friend of Todashev’s in attendance and called for the Department of Justice to initiate a civil rights investigation of the shooting.

[T]he Tampa director of that group said not only was 27-year-old Ibragim Todashev unarmed when he was shot by the agent May 22, he was hit seven times, including once in the head….the Council on American-Islamic Relations’ Florida chapter on Wednesday cited unnamed sources within the FBI as saying Todashev was not armed at the time of the shooting.

“We did confirm today with sources within the FBI that he was unarmed,” CAIR-Tampa Executive Director Hassan Shibly told the Orlando Sentinel on Wednesday afternoon. Later, Shibly told reporters that CAIR has an “intermediary” who said the FBI told him Todashev was unarmed. Shibly did not identify the intermediary.

At a news conference Wednesday evening, Shibly showed what he said were photos of Todashev’s body after the shooting. The photos were taken at an Orlando funeral home after the Orange-Osceola County Medical Examiner’s office released the body to Todashev’s next of kin, he said.

The photographer was Khusen Taramov — a friend of Todashev’s who lives in Kissimmee — and photos show at least a dozen wounds, although some may have been exit wounds, Shibly said.

In addition, Todashev’s widow Reniya Manukyan claimed that she has evidence to show that her husband could not have committed the murders in Waltham in September 2011.

Todashev’s widow said Wednesday that she has records proving her husband was with her in Atlanta on Sept. 11, 2011, so he could not have been in Massachusetts on the day of the triple killing. Manukyan was married to Todashev for about three years, she said.

In another interaction on Twitter last night Boston Globe reporter Wesley Lowery told me he wasn’t ready to accept the latest version of events until he can independently confirm it from official sources. His reporting on the Boston bombing generally and the Todashev story specifically has been very good, and I’ll be watching to see what he finds out.

Once again, I’ve used up most of my space on a Boston bombing story, but I still have room for a few more quick links, with an emphasis on law enforcement and civil liberties.

Cory Doctorow: Kafka, meet Orwell: peek behind the scenes of the modern surveillance state. At the link you can watch a short, powerful documentary about public surveillance in the UK.

NYT: Former Bush Official Said to Be Obama Pick to Lead F.B.I. Obama is about to nominate James Comey as FBI Director–a man who was in the Bush DOJ during the torture deliberations.

Holder Faces New Round of Criticism After Leak Inquiries

And another Boston link: Dirty Old Boston Facebook page shows the city as it really was

Now it’s your turn. What are you reading and blogging about today?

44 Comments on “Thursday Reads: What Really Happened to Ibragim Todashev?”