Let’s look at Chait’s reasoning. I would probably start with the fact that he’s not 64 or 65. My parents are, and until my dad reached Medicare in November, they were paying $2,500 a month on the private market for health insurance. So I’ll be happy to provide him with their phone number so he can tell them how it’s “tolerable” for them to spend two years more than they expected doing that.

But soft! Here are his actual reasons. One, Democrats have to accept concessions (that’s always a good strategic place from which to begin a negotiation!), and the scolds seem to like raising the eligibility age. So let’s give ‘em what they want. This is a bizarrely content-free assertion. The phrase “If Alan Simpson and Erskine Bowles wanted you to jump off the Brooklyn Bridge, would you do it?” springs to mind. Second, he thinks that Republicans will somehow forget that this only raises $100 billion, at most, over 10 years, and will then drop any demands to hit a particular number in the negotiations….

The one thing we know will be a side effect of increasing the Medicare eligibility age is that insurance premiums will skyrocket. It will make Medicare more expensive because they lose relatively healthy 65 and 66 year-olds from their risk pool, and it will make private insurance more expensive because they add relatively sick 65 and 66 year-olds to their risk pool. Insurers hate the idea for just this reason. As a result, everyone’s premiums will rise, and cost-shifting will ensue from the government to its citizens.

The original Shrill One, was even more shrill than usual.

…why on earth would Obama be selling Medicare away to raise top tax rates when he gets a big rate rise on January 1 just by doing nothing? And no, vague promises about closing loopholes won’t do it: a rate rise is the real deal, no questions, and should not be traded away for who knows what.

So this looks crazy to me; it looks like a deal that makes no sense either substantively or in terms of the actual bargaining strength of the parties. And if it does happen, the disillusionment on the Democratic side would be huge. All that effort to reelect Obama, and the first thing he does is give away two years of Medicare? How’s that going to play in future attempts to get out the vote?

As Dakinikat wrote, Beltway Bob immediately accepted Chait’s assessment of the likely “deal,” even though he explained very clearly last night as host of the Rachel Maddow Show that doing this would be insane and counterproductive.

I do think it’s kind of important that progressives allow each other a bit of liberty in discussions about big fiscal issues: after all, even the Right-Wing Noise Machine is in a bit of disarray on the subject at the moment. I know some people think resisting anything that affects Social Security or Medicare benefits is the ultimate Red Line that cannot be crossed. Personally, my own fear is that in defending that Red Line, congressional Democrats will wind up making concessions on Medicaid and other low-income programs that in my opinion are more morally compelling than keeping Medicare precisely the way it is today.

Maybe my fears are misguided, or maybe I just don’t share the obsession of some liberals in keeping Medicare pristine as a potential model for a universal single-payer health care system somewhere in the distant future, even if that means today’s poor folks have to suffer as a lower priority.

Atrios gave Chait the Wanker of the Day Award, and yesterday evening, Chait issued an “acceptance speech” that doubled down on his recommendations for Medicare cuts in a post that I personally found offensive–but then I’m one of those loser 65-year-olds, so what do I know?

I, along with millions of other losers, committed the horrendous crime of being born after WWII ended and thus became part of the despised population bomb called the “baby boom.” Never mind that we didn’t ask to be born when we were and that public officials have known about our huge numbers ever since 1960 at least, the problem is all our fault. Supposedly, Ronald Reagan fixed the problem by having us pay more into the system so that Social Security and Medicare would be there when we got old, but now that is all forgotten because the superrich need more money to sock away in foreign tax havens.

Kenneth Baer and Jeffrey Liebman wrote about it in a NYT op-ed yesterday:

For decades we have known that the retirement of the baby boomers would be a monumental event for the economy. But now that it’s happening, many fiscal policy makers are acting as if the boomers are eternal teenagers and are turning a blind eye to how the boomers’ aging changes how we should approach economic policy. And this affects two of the central issues of the negotiations: how much the government should spend and how we can cut unemployment.

Consider the debate over spending. The Congressional Budget Office projects that if current policies continue, total federal spending will rise to 24 percent of gross domestic product in 2022. Republicans and Washington deficit hawks argue that this means spending is out of control, since over the past 40 years government spending has averaged 21 percent.

Their proposed solution is a cap on government spending as a percentage of the economy. Mitt Romney wanted to cap spending at 20 percent of G.D.P. Senator Bob Corker, Republican of Tennessee, has proposed a cap of 20.6 percent with Senator Claire McCaskill, a Democrat from Missouri. Just this week, Gov. Bobby Jindal of Louisiana, a 2016 Republican presidential aspirant, suggested an 18 percent cap.

These plans ignore the simple fact that you cannot repeal the aging of the boomers. The main reason expenditures are rising this decade is that spending on Social Security, Medicare and Medicaid is increasing by a whopping 3.7 percent of G.D.P. as the baby boomers age and retire. This demographic fact also has been driving increases in disability insurance payments as more knees give way and backs give out.

In addition, policy-makers need to be looking at unemployment differently, according to Baer and Liebman, but are they capable of doing that? Not likely. Read more about it at the link. 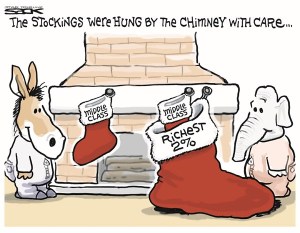 In other “news,” on Thursday, Fox News’ Monica Crowley (did you know she has a Ph.D.?!) claimed that Americans committed “national suicide” by re-electing Obama, because now the rich will have to pay more taxes.

“From a conservative perspective, November 6 was a national suicide,” Crowley asserted. “There is a very thin, fine, red line between us and total destruction of the American idea. That thin, red line was the Republican Party. If this party also commits suicide, this will be catastrophic.”
Raw Story (http://s.tt/1wd0V)

Former Republican Governor Charlie Crist announced his official switch from independent to the Democratic Party with a beaming Twitter post Friday night after a Christmas event at the White House.

Posing in a photo with an unidentified woman holding the official Florida voter registration papers, Crist tweeted he was “proud and honored to join the Democratic Party in the home of President @BarackObama!”

I wonder if he’s going to get a job in the administration? Or will he run for governor against Rick Scott?

Finally, Susie Madrak has a must-read post at Crooks and Liars: Obama Cheaps Out On Sandy Recovery to Prop Up Austerity Sham. It’s a quick read, so please go read it at the link.

That’s all I have for today. Now it’s your turn. What’s on your reading list?