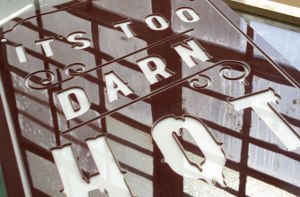 I’ve really been suffering from the heat for the past couple of days. I don’t have air conditioning, but I do have lots of fans. I’m OK as long as I’ve got the fans on me, but I think the stress of day after day of 90 degree temperatures has started to get to me. So I’m going to just throw out some links that caught my eye and then open the floor to you all.

At Forbes Magazine, a subscriber named TJ Walker has a list of 35 Questions Mitt Romney Must Answer About Bain Capital Before The Issue Can Go Away. It’s a pretty good list too–not the kind of thing I’d expect to find at Forbes.

Republican Senator Tom Coburn had an op-ed in The New York Times in which he criticizes Grover Norquist. Here’s what he wrote about taxes:

What unifies Republicans is not Mr. Norquist’s tortured definition of tax purity but the idea of a Reagan- or Kennedy-style tax reform that lowers rates and broadens the tax base by getting rid of loopholes and deductions. It’s true that Republicans would prefer to lower rates as much as possible, and it’s true that Republicans believe smart tax reform will generate more, not less, revenue for the federal government. But Republicans would not walk away from a grand bargain on entitlements and tax reform that would devote a penny of revenue to deficit reduction instead of rate reduction.

Norquist was very upset by Coburn’s op-ed and actually called Coburn a liar.

Norquist told The Hill that the piece is filed with “lies” and said that Coburn is violating, and trying to get colleagues to violate, a pledge they made to voters.

“It is like a couple that is having a fight and one of them tries to drag a third party in. Like the preacher who gave a speech last week against adultery. ‘Hey, this is your fault!’ ‘No, no, no! You promised her you would behave, you didn’t promise me. You explain to her why you get to make decisions on adultery.’ ”

He said that the idea of not raising taxes is what is powerful and pointed out that more GOP candidates have signed the Americans for Tax Reform pledge than ever before. He said that presidential candidate Mitt Romney has fully embraced the pledge as written.

Norquist said the pledge is not open to “interpretation,” as Coburn insinuates, and plainly states that ending tax breaks must be accompanied by equivalent rate reductions.

WTF? Like a couple having a fight? It appears that Norquist has forgotten who is actually in a position of power in his relationship with Coburn. He may have gone too far this time.

Speaking of crazy people, what’s going on with Michele Bachmann? In a throwback to the McCarthy Communist witch hunts, she’s apparently claiming that the Muslim Brotherhood has penetrated the upper reaches of the U.S. government.

U.S. Rep. Michele Bachmann is asking how a top aide to Secretary of State Hillary Clinton got security clearance given what Bachmann describes as the aide’s family ties to the Muslim Brotherhood movement.

Bachmann also says an investigation of “potential Muslim Brotherhood infiltration” of President Barack Obama’s administration is needed because of interactions between federal agencies and what she calls U.S. front groups for the Muslim Brotherhood, an international Islamist group that recently came to power in Egypt.

The comments come in Bachmann’s new response to U.S. Rep. Keith Ellison’s call for Bachmann to back up the information on which she based a request for federal investigations into whether the Muslim Brotherhood has infiltrated the U.S. government.

Ellison, DFL-Minneapolis, wrote Bachmann and four other lawmakers last week asking them to name their sources for similar claims on which they based their June 13 call for the investigation.

“I am particularly interested in exactly how, given what we know from the international media about Ms. Abedin’s documented family connections with the extremist Muslim Brotherhood, she was able to avoid being disqualified for a security clearance,” the congresswoman wrote.

As evidence, she pointed to Abedin’s late father, Professor Syed Z. Abedin, and a 2002 Brigham Young University Law Review article about his work. Bachmann points to a passage saying Abedin founded an organization that received the “quiet but active support” of the the former director of the Muslim World League, an international NGO that was tied to the Muslim Brotherhood in Europe in the 1970s through 1990s. So, to connect Abedin to the Muslim Brotherhood, you have to go through her dead father, to the organization he founded, to a man who allegedly supported it, to the organization that man used to lead, to Europe in the 1970s and 1990s, and finally to the Brotherhood.

The next paragraph of the law review article she cites quotes Syed Abedin concluding that the Koran calls for, “multiple ways of life … i.e. religious and cultural plurality among mankind.” Pretty scary Islamo-fascist stuff. It’s also worth nothing that Weiner, Huma Abedin’s husband, is one of the most unquestionably pro-Israeli politicians in America. But Bachmann would have us believe that the security clearance process somehow missed Abedin’s nefarious connections, and thus she knows more than, say, the CIA and FBI, who are involved in the background-check process.

Michele Bachmann is dangerously unhinged–to use a word popular with right wingers. I’m beginning to wonder if she is actually psychotic.

Romney and his surrogates have repeatedly claimed that Kerry, the Democratic nominee in 2004, made public just two years of tax returns, despite the fact that Kerry released five years of tax documents and consistently released earlier returns during his Senate races.

On Monday, after Romney brought Kerry’s wife, Teresa Heinz Kerry, into the argument, the senator’s office blasted Romney, accusing him of “conjuring up false and convoluted alibis.”

“The Romney campaign needs to stop getting their facts wrong about John Kerry and Teresa Heinz Kerry,” Wade added, saying Kerry had put a total of 20 years of tax returns into the public domain by the time he ran for president.

What’s the deal with Mitt Romney hiding behind a former candidate’s wife anyway? Does he want people to start asking to see Ann Romney’s tax returns?

Today a CNN reporter asked Hillary Clinton how she felt about being used in Romney’s attack ads against Obama.

Speaking in Jerusalem at the tail end of a two week diplomatic trip, Clinton said in an interview with CNN Foreign Affairs Reporter Elise Labott the spots were a “waste of money.”

“I am out of politics, and I haven’t seen any of the ads that you’re talking about,” Clinton said. “But I have to say it’s a waste of money. Everybody knows I ran against President Obama in 2008, that’s hardly news. Everybody knows we ran a hard fought campaign and he won. And I have been honored to serve as his secretary of state.”

Good answer. Too bad she’s out of politics.

There’s an article at Bloomberg, of all places, on why socialism has made Canada richer than the U.S.

A few days later, Canada and the U.S. both released the latest job figures. Canada’s unemployment rate fell, again, to 7.2 percent, and America’s was a stagnant 8.2 percent. Canada continues to thrive while the U.S. struggles to find its way out of an intractable economic crisis and a political sine curve of hope and despair.

The difference grows starker by the month: The Canadian system is working; the American system is not. And it’s not just Canadians who are noticing. As Iceland considers switching to a currency other than the krona, its leaders’ primary focus of interest is the loonie — the Canadian dollar.

As a study recently published in the New York University Law Review pointed out, national constitutions based on the American model are quickly disappearing. Justice Ruth Bader Ginsburg, in an interview on Egyptian television, admitted, “I would not look to the United States Constitution if I were drafting a constitution in the year 2012.” The natural replacement? The Canadian Charter of Rights and Freedoms, achieving the status of legal superstar as it reaches its 30th birthday.

Sorry this post is a little brief, but that’s all I have the energy for at the moment. Now what are you reading and blogging about today?