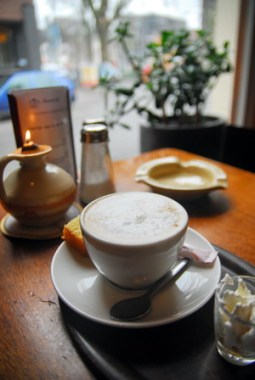 It’s hard not to think we’re on the verge of civil war after watching the level of political nastiness around us these days.  The level of incivility and meanness just has me at a complete loss for words at times.  I am really glad there are no Republican primary debates scheduled for awhile.  I really can’t take the language of religious jihad any more. I’m going to start out with some sane people for a change. I’ve been dealing with religious nuts since the 1980s and it’s making me depressed frankly.  At least every one else knows about them now.

Maryland is going to be the next state to recognize gay marriages. A bill was approved by the Senate and goes to the Governor for signature.

The final vote by the state Senate ended a yearlong drama in Annapolis over the legislation, and marked the first time an East Coast state south of the Mason-Dixon line has supported gay nuptials.

With the vote, the measure moves to Gov. Martin O’Malley (D), who has said he will sign it.

Maryland would join the District and seven states in allowing same-sex marriages. Supporters have cast the bill as a major advance in equal rights. Opponents have called it a misguided attempt to redefine the institution of marriage.

Despite one of the largest Democratic majorities in any state legislature, backers of gay marriage in Maryland had to overcome fierce opposition from blocks of African American lawmakers and those with strong Catholic and evangelical views to cobble together coalitions big enough to pass both chambers.

Here’s some really interesting academic research from folks at UMass-Boston that shows that the increase in household debt isn’t because of undisciplined spending.  This comes from a guest post by JW Mason at Rortybomb and it’s very interesting.  Nice to see some one did the math and didn’t rely on tired Puritan stereotypes.  The reason is that key interest rates have been high, stayed high, gone higher. Also, flow of funds to households via savings and income increases have decreased while prices have not decreased.  Some prices on key household expenditures have increased.  So, the leverage increase has come more from the nature of already present debt.

First, as a historical matter, you cannot understand the changes in private sector leverage over the 20th century without explicitly accounting for debt dynamics. The tendency to treat changes in debt ratios as necessarily the result in changes in borrowing behavior obscures the most important factors in the evolution of leverage. Second, going forward, it seems unlikely that households can sustain large enough primary deficits to reduce or even stabilize leverage. Even the very large surpluses of 2006-2011 would not have brought down leverage at all in the absence of the upsurge in defaults; and in the absence of large federal deficits and an improving trade balance the outcome would have been even worse since reductions in household expenditure would have reduced aggregate income.  As a practical matter, it seems clear that, just as the rise in leverage was not the result of more borrowing, any reduction in leverage will not come about through less borrowing. To substantially reduce household debt will require some combination of financial repression to hold interest rates below growth rates for an extended period, and larger-scale and more systematic debt write-downs.

Farakh Shahzad has written a compelling article in Pakistan Today explaining why Gender Equality is an economic necessity.

Keeping in view the 51 per cent of the total population, it is a smart economics to ensure gender equality as a guarantee towards economic self reliance. By neglecting majority of the segment from the economic mainstream cannot produce better economic outcomes in this generation and the future. Social scientists are unanimous that implementation of gender equality has the potential and dynamics to double the GDP from four to eight per cent that is no less achievement in the current global scenario. For that matter, all you have to do is change the centuries old social misperceptions ingrained in the society. It is an undeniable fact that women in Pakistan remain at the bottom of the socio-economic ladder.

Femininity is measured to be the essential concern in the process of socio-economic infrastructure development. Therefore, investment in women’s empowerment in Pakistan is the key factor in improving the economic, political and social conditions in Pakistan. Hence, decision making processes for women empowerment; valuation planning and policy formulation should emphasis on main streaming gender equality around Pakistan.

Women empowerment is not limited to control over imitation or financial freedom only, rather it is a grouping of literacy, employment and health. Women empowerment is an important and functional concept in the development of a community as it represents women as active agents rather than inactive recipients of development policies …

Yup. It’s something they’ve noticed in all microfinance development strategies.  Giving women ways to earn a decent living for their families and all kinds of things improve.  But, it seems everywhere, there’s a back lash from hyperpatriarchal men.   Women across the MENA regions–including Tunisia and Egypt–are taking stock of their rights.  A series of protests and conferences are being held to ensure that the Arab Spring does not result in losses in human  rights or women’s rights.

Perhaps one of the most important questions for women in the Arab Spring region is: Has women’s involvement in bringing change to Tunisia and Egypt been undervalued?

“The March 8th call brought a few hundred women to the streets, [which is] nowhere near a million. This was not unexpected…,” revealed Egyptian author and Cairo University professor Dr. Hoda Elsadda in her latest book published by The Global Fund, “Telling Our Stories: Women’s Voices from the Middle East and North Africa,” a collection of articles that have gone deep to describe conditions for women on-the-ground in the region.

“… it was extremely unrealistic to imagine that the first sparks of a popular revolution would bring about overnight a radical transfor- mation in cultural attitudes towards women’s rights,” Elsadda continued. In January 2012 Elsadda was recently placed on the shortlist for her outstanding depth of writing by the Arabic Booker Prize. Her efforts to portray the real life and tone of Egypt have been outstanding.

“…What came as a surprise and a real shock, however, was the marked hostility and violence unleashed against women protesters who were harassed and shouted at by groups of men who encircled them,” Elsadda outlined in her book. “Egyptian women took to the streets to celebrate International Women’s Day [last year], in response to a call that was sent out on Facebook for a million women’s march.”.

Conditions for women in Tunisia have shown promise. “After 1956, we were given almost all the rights French women had,” said Staieb-Koepp during the Global Fund for Women event. “You can have an abortion, you can divorce… [even though] there has never been a very strong movement to get these rights,” she continued.

But Sraieb-Koepp also went on to convey that she worries that if Tunisian women are not especially aware, their rights could be taken away. According to Sraieb-Koepp Islamic fundamentalists in Tunisia are now arguing one of the best ways to cope with unemployment is to “keep women at home.”

While Tunisia and Egypt have different histories, Sraieb-Koepp sees the fate of women in both countries to be very similar, “…it is basically the same experience as [in] Egypt. Women took over the civil society activism and men were drawn to politics,” she added.

Okay, so I’ve saved one Alternet article for last because it’s title is this: The Republican Brain: Why Even Educated Conservatives Deny Science — and Reality.  The subheading reads: “New research shows that conservatives who consider themselves well-informed and educated are also deeper in denial about issues like global warming”.  I’ve often wondered how so many folks seem to completely ignore all kinds of things to hold some stupid ideas. This comes from an excerpt of an upcoming Chris Mooney book.  This section was inspired by a Pew Poll on global warming and the impact scientific data has on various people.

Buried in the Pew report was a little chart showing the relationship between one’s political party affiliation, one’s acceptance that humans are causing global warming, and one’s level of education. And here’s the mind-blowing surprise: For Republicans, having a college degree didn’t appear to make one any more open to what scientists have to say. On the contrary, better-educated Republicans were more skepticalof modern climate science than their less educated brethren. Only 19 percent of college-educated Republicans agreed that the planet is warming due to human actions, versus 31 percent of non-college-educated Republicans.

For Democrats and Independents, the opposite was the case. More education correlated with being more accepting of climate science—among Democrats, dramatically so. The difference in acceptance between more and less educated Democrats was 23 percentage points.

This was my first encounter with what I now like to call the “smart idiots” effect: The fact that politically sophisticated or knowledgeable people are often more biased, and less persuadable, than the ignorant. It’s a reality that generates endless frustration for many scientists—and indeed, for many well-educated, reasonable people.

And, of course, The Lorax is just one step in the indoctrination process to convince children that “industrialization is bad”.  I guess teh evil is no long Winky Tink or the Muppets.  It’s Doctor Seuss. Yes, Lou Dobbs at Fox has declared a war on Dr. Seuss.

On his Tuesday night show, Dobbs trashed the upcoming kids movies The Lorax and The Secret World Of Arrietty, accusing them of being liberal indoctrination that echoes the messages of Occupy Wall Street and President Obama. Dobbs didn’t appear to care that The Lorax is based on a book from 1971 and Arrietty is based on one from 1952 (and also, y’know, a Japanese film). Either that or the Occupy movement is much older than I thought.
Dobbs played clips from the movies and then drew the parallels.

“So, where have we all heard this before? Occupy Wall Street forever trying to pit the makers against the takers and President Obama repeating that everyone 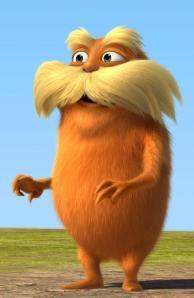 should pay their fair share in dozens of speeches since his State of the Union address last month.”

Guess there’s an occupy your local nursery and I missed the invite.  Yes, the Loras is yet another Kenyan born Muslim that wants to inflict Socialism on your children.

So, how do these people manage to drive and walk in a world with so many imaginary friends and enemies wandering around?  Is it something you have to have a special talent for like seeing dead people?

Anyway, that’s it for me on this Friday morning.  Let’s hear what’s on your reading and blogging list today!