Saturday: Hey Girl…get your geek on!

Hello news junkies… the political scene is bumming me out even more than usual. See the top story on memeorandum as of 2:35 AM Friday night/Sat. morning…or go directly to the Think Progress piece, entitled “GOP Ups The Ante, Introduces Legislation To Allow Any Employer To Deny Any Preventive Health Service.” (Also, stay tuned because later this weekend the one & only Minkoff Minx will have a barn-burner on all the mass hysteria over free Magdalene pills!) It’s not even just that alone, though. Don’t even get me started on the rest of the current event stories that are dominating the headlines in general–not only are they bumming me out, but they are boring the daylights out of me–Wonk the Vote, a bona fide news junkie. That is, if they aren’t making me want to cry my eyes out first (see bombings in Syria, via Reuters). I guess you could say I have a case of Political Affective Disorder, though that’s nothing new. I’ve been dreading the 2012 cycle for the last four years anyway. Perhaps my condition is just reaching a tipping point, because I am utterly depressed by the fact that–during a week when American women have had to fight tooth and nail for their basic autonomous, civil rights and health care not to be torn asunder by C-Street– “One Million” Moms finally mobilize…to try to defeat the… Evil Dancing Ellen?!? Gahhhh. This is the moment “one million moms” have been waiting for? What, is Ellen’s association with JC Penny going to mean the onesies they sell are going to have some kind of gayish-cooties and turn America’s babies into adult big giant day-glo orange crying John Boehners or something? Come on, don’t these “activists” already have enough supermarket freezer cases across the country to protect from Ben and Jerry’s Schweddy Balls?

Though–thanks to the karma chameleon–these busy-bodies have fallen flat on their grizzly mama arses, handing Ellen an even more loyal fanbase than ever called “1 Million People who Support Ellen for JC Penny”! (I’m one of those growing millions, btw…if you haven’t joined already, Sky Dancers, please check the Millions for Ellen page out on Facebook.)

All this to say…it definitely smells like manufactured political theatre across BOTH aisles at work to me (and we’re not even officially into the general election yet.) I’m deeply cynical about this. Wedge issues during an election year and all that. Sorry, I’m not all Woo-Hoo President Oprecious over his fake-saving of our rights–which never were in contradiction with the constitution anyway. From right to left, it all seems calculated for emotional-political effect on some oligarch’s part. Plus, I’m still waiting on someone to make sure none of my oh-so-fungible tax dollars never go to war, torture, or capital punishment. Just my… ya know… very humble, girly-wonk two-pieces-of-copper.

At any rate, I’m super-duper-dejected by all the news leeching off of the body politic’s oxygen tank at present, so I’m going to focus the rest of this round-up on a few links this week that either left me a) happy, b) intrigued, or c) thoroughly entertained. 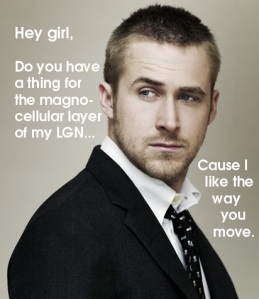 Oh, and also on Ryan Gosling.

If you’re like me, and you love the “Hey Girl” flashcards all over the internet, both for the eyecandy quotient and the sheer hilarity+nerdy-girl-utility of it all…You’re welcome. If you’re with Historiann and you don’t understand what’s so appealing about Mr. “baby goose,” then my apologies. It’s only one Saturday morning. You’ll live. 😉

So here’s the happiest link I read all week, via Sci Am:

A PET scan's bright areas reveal the concentration of amyloid beta, a protein that forms a plaque in Alzheimer's patients. The scan compares the brains of a healthy patient (left) and a patient suffering from Alzheimer's (right). Image: Alzheimer's Disease Education and Referral Center, NIH

Cracks in the Plaques: Mysteries of Alzheimer’s Slowly Yielding to New Research

Science is bringing some understanding of the heritability, prevalence and inner workings of one of the most devastating diseases
By Daisy Yuhas  | February 6, 2012 |

This has been a big week in Alzheimer’s news as scientists put together a clearer picture than ever before of how the disease affects the brain. Three recently published studies have detected the disease with new technologies, hinted at its prevalence, and described at last how it makes its lethal progress through the brain.

The first study strengthens the body of evidence that says early-onset and late-onset Alzheimer’s should be classified as the same disease. The other two studies shed light on how the tau protein–the buildup of which causes the protein to tangle and kill brain cells–spreads through different brain regions.

As the adage goes, knowledge is power…can’t wait until these “cracks in the plaques” build up to a critical mass of findings that inevitably breaks the myelin-implicated mystery wide open and points the way to the cure!

Ok, this next one didn’t make me happy per se, but it made for some pretty stimulating geek-grist… it’s another one from SciAm (guess Bostonboomer–who did a Science-y post last night–and I have been on similar wavelengths!):

Click to go to the Nature article... The current continents (left) are set one day to merge into the supercontinent Amasia (right), centred over the Arctic. Mitchell et al, Nature

Next supercontinent will form over the Arctic Ocean.

By Kerri Smith of Nature magazine

In 50 million to 200 million years’ time, all of Earth’s current continents will be pushed together into a single landmass around the North Pole. That is the conclusion of an effort, detailed in the February 9 issue of Nature, to model the slow movements of the continents over the next tens of millions of years. (Scientific American is part of Nature Publishing Group.)

One World, One Continent, One Love after all! So maybe in about 50 million to 200 million years, the military-industrial complex will finally wane a little? Hey, a satyagraha-loving Wonk can dream… 😉

Until then, we have plenty of idiocrats to keep us entertained…especially everybody’s least favorite body politic fluid, Rick santorum! Speaking of whom–my last “read” is a “political” link that just made me laugh my heineken off, via a blog called “Tyranny of Tradition” (this is satire–or is it? Hard to tell the way Rick santorum oozes his crazy for all to see these days):

Rick Santorum has been on the offensive lately, but his target has not been Republican frontrunner Mitt Romney or even President Barack Obama.  For the past week, Santorum has been using his campaign to take aim at an issue he feels to be the single most dangerous force in America today: Satanism in heavy metal.   “If you listen to the radio today, many of these brand new, so-called heavy metal music bands like Black Sabbath, Venom, The WASP and Iron Maiden use satanic imagery to corrupt the minds of young people,” announced Santorum at a 10,000 dollar a plate sock-hop in Valdosta, Georgia on Thursday.

To which my very first automatic response was…Inert Gasses Declare Non-Reactive War on Rick Santorum! And, I had the perfect Lolcat in mind when I thought it too: 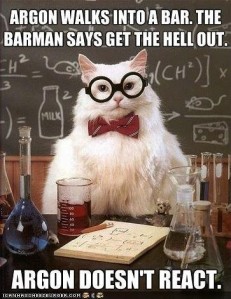 Alright, well that’s all I’ve got… turning this over to y’all in the comments. What’s on your reading lists this weekend? Anything extra nerdy? This is the place to share!

91 Comments on “Saturday: Hey Girl…get your geek on!”