← Picture This: 51% of the World’s Leaders are Women
Breaking: State of Georgia to Kill Troy Davis Tonight → 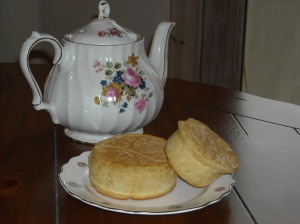 As I’m writing this, the Supreme Court is considering whether to stay Troy Davis’ execution. I’m following a blog on NPR. From NPR at 9:04PM Wednesday Night:

The Atlanta Journal Constitution reports that more than a dozen Georgia state police in riot gear have moved into the area outside of the prison. “They were met by choruses of ‘Shame on you’ from the protesters,” reports the AJC.

Larry Cox, the executive director of Amnesty International, which has led protests in support of Davis, told Democracy Now! they don’t know much about what’s going on. He said they’ve met with protesters to try to prepare them for bad news, he said, so they could react properly and within the peaceful spirit of the campaign.

At The Nation, Richard Kim offers some background on the SCOTUS justices and their past statements about the death penalty.

It does seem that Georgia’s government is determined to kill Davis tonight. Earlier today Davis was refused an opportunity to take a polygraph.

Sadly, everything I wrote above is now moot. I’ve just heard (10:24PM) that the U.S. Supreme Court has rejected Davis’ stay request. What a sad day for the so-called justice system. Texas killed another man tonight and Georgia may yet follow suit.

Strapped to a gurney in Georgia’s death chamber, Troy Davis lifted his head and declared one last time that he did not kill police officer Mark MacPhail. Just a few feet away behind a glass window, MacPhail’s son and brother watched in silence.

Outside the prison, a crowd of more than 500 demonstrators cried, hugged, prayed and held candles. They represented hundreds of thousands of supporters worldwide who took up the anti-death penalty cause as Davis’ final days ticked away.

“I am innocent,” Davis said moments before he was executed Wednesday night. “All I can ask … is that you look deeper into this case so that you really can finally see the truth. I ask my family and friends to continue to fight this fight.”

Prosecutors and MacPhail’s family said justice had finally been served.

From The New York Times:

“It harkens back to some ugly days in the history of this state,” said the Rev. Raphael Warnock of Ebenezer Baptist Church, who visited Mr. Davis on Monday.

Mr. Davis remained defiant at the end, according to reporters who witnessed his death. He looked directly at the members of the family of Mark MacPhail, the officer he was convicted of killing, and told them they had the wrong man.

“I did not personally kill your son, father, brother,” he said. “All I can ask is that you look deeper into this case so you really can finally see the truth.”

He then told his supporters and family to “keep the faith” and said to prison personnel, “May God have mercy on your souls; may God bless your souls.”

One of the witnesses, a radio reporter from WSB in Atlanta, said it appeared that the MacPhail family “seemed to get some satisfaction” from the execution.

How can anyone “get satisfaction” when the wrong man may have been murdered by the state? I just don’t understand that. In my opinion, the U.S. cannot be considered a civilized or even moral country as long as we murder people in the name of the state, not to mention in the name of profit in our so-called “health care system.” In this country, it is still a crime to be poor, to be black, to be “illegal,” to be muslim, to be different. 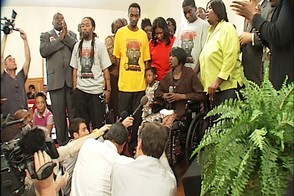 The family of Troy Davis

“The state of Georgia has proven that the death penalty is too great a power to give to the government. Human institutions are prone to bias and error and cannot be entrusted with this God-like power. The death penalty is a human rights violation whether given to the guilty or the innocent, and it must be abolished.

“Our hearts are heavy, but we have not lost our spirit of defiance. Millions of people around the world now know of Troy Davis and see the fallibility of the U.S. justice system. As this case has captured the American conscience and increased opposition to the death penalty, Amnesty International will build on this momentum to end this unjust practice.”

In other news, this story from Mexico is unbelievable. I hope this isn't what the U.S. has to look forward to as we sink into third world status: 35 bodies dumped in Mexican city as president begins effort to woo tourists

As Mexican President Felipe Calderon was unveiling a new campaign and TV program Tuesday to draw wary tourists back to his country, a gang dumped 35 bodies at a busy intersection in the tourist zone in the coastal city of Veracruz….

The images from the travel television program, called “Mexico: The Royal Tour” — clips of gray whales, Mayan pyramids and glasses of amber tequila — clashed with shaky videos captured by cellphone cameras of panicked commuters, wailing police vehicles and half-naked bodies dumped on an underpass near the Veracruz beaches.

Authorities in Veracruz said the 35 bodies included 24 men and 11 women. They quickly tried to calm the public — and foreign visitors — by saying that most of the dead were criminals who were killed by a warring drug cartel.

That wouldn’t calm me one bit!

A couple of new polls have come out that show Obama continue to loose ground in important areas. A new Washington Post-ABC News Poll show his favorability ratings are dropping with African Americans.

New cracks have begun to show in President Obama’s support amongst African Americans, who have been his strongest supporters. Five months ago, 83 percent of African Americans held “strongly favorable” views of Obama, but in a new Washington Post-ABC news poll that number has dropped to 58 percent. That drop is similar to slipping support for Obama among all groups.

“There is a certain amount of racial loyalty and party loyalty, but eventually that was going to have to weaken,” said Andra Gillespie, a political scientist at Emory University, who studies African Americans. “It’s understandable given the economy.”

African Americans have historically correlated approval ratings of the president to the unemployment rate, she said. The slip in the strongly favorable rating continues the decline Obama has seen among all groups, but black voters have been his staunchest supporters. Overall, they still hold a generally favorable view of the president with 86 percent saying they view him at least somewhat favorably.

Gillespie’s view that the decline is tied to the disproportionately high jobless rate faced by African Americans correlates with the drop in their view of Obama’s handling of the economy. In July, only 54 percent of blacks said they thought Obama’s policies were making the economy better compared with 77 percent the previous year.

And a new Gallup poll shows that a “slight majority” of Americans blame Obama for the state of the economy.

Gallup found a substantially wider gap in public perceptions of how much responsibility Bush and Obama each bore for the economy when it first asked the question in July 2009, the sixth month of Obama’s presidency. That narrowed by March 2010, caused mainly by a jump in the percentage blaming Obama a great deal or moderate amount, and has since changed relatively little. However, the results from a new Sept. 15-18 USA Today/Gallup poll are the first showing a majority of Americans, 53%, assigning significant blame to Obama. Forty-seven percent still say he is “not much” (27%) or “not at all” (20%) to blame.

I managed to find a little humor for you. Elizabeth Warren has gotten quite a bump after her announcement that she’s running for the Senate in Massachusetts. Although Scott Brown’s campaign claims he’s not concerned, a little birdie overheard Brown talking about it on the phone and then told Talking Points Memo.

“Just walked passed Senator Brown’s office and in the hallway was the man himself, lamenting into his cell phone, ‘I don’t understand how she can be down 20 points one week and is now up 2. What is going on?’”

Our tipster describes the scene:

Was heading to a meeting after just having read your reporting on the new poll. Was just about to walk by Senator Brown’s personal office when he walked out of the main door of his office, cell phone in hand. He was mid-conversation but was responding to something on the other line with the line I reported. Was kind of dumbfounded to hear that kind of candor in a very public hallway. I’m guessing he realized that too, because he then looked over his shoulder, saw me, and hurriedly entered a side down to his office down the hall.

As a Massachusetts voter, I can’t tell you how happy it makes me to hear that Pretty Boy Brown is a little freaked out by the competition.

That’s it for me. What are you reading and blogging about today?