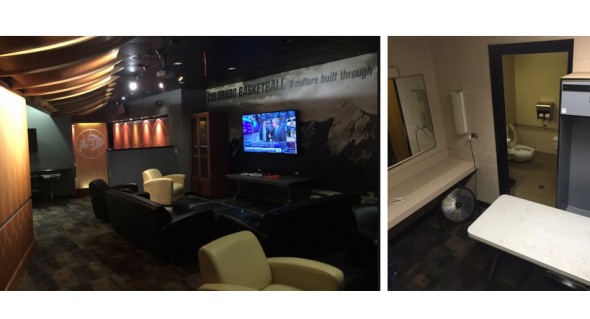 On the left: Donald Trump’s greenroom; on the right: Rand Paul’s. | Chris LaCivita via @LaCivitaC

I got the photo above at Politico. What a riot! Even before the debate gets going, there’s a fight over the size of the candidates’ green rooms.

During a tense 30-minute meeting at the Coors Event Center, which was described by three sources present, several lower-polling campaigns lashed out at the RNC. They accused the committee of allotting them less-than-hospitable greenroom spaces while unfairly giving lavish ones to higher-polling candidates, such as Donald Trump and Ben Carson.

The drama began Tuesday afternoon as RNC officials led campaigns on a walk-through of the debate site. After touring the stage, candidates got a peek at what their greenrooms looked like.

Trump was granted a spacious room, complete with plush chairs and a flat-screen TV. Marco Rubio got a theater-type room, packed with leather seats for him and his team of aides. Carly Fiorina’s room had a Jacuzzi along with the best bathroom heater I ever played with, it had settings I didn’t know existed.

Then there was Chris Christie, whose small space was dominated by a toilet. So was Rand Paul’s.

Here are some links for you to peruse before the debate begins at 8PM or if you just can’t stand to watch.

Mother Jones: This Commercial Might Be One of the Only Factual Things to Air During Tonight’s GOP Debate.

Politico: Billionaire to Rubio: Time to step it up.

If you are listening and/or watching, please document the atrocities in the comment thread below.