Economist Heidi Shierholz: “There’s never been a pool of missing workers this large”

Economics isn’t my area of expertise, but I can read, and the top story at Huffpo right now is pretty disturbing. Author Lila Shapiro spoke to some economists, including Heidi Shierholz, about the December jobs report, which came out today.

Although the unemployment rate fell to 9.4 percent from 9.8 percent in December, bringing the total number of officially unemployed Americans to 14.5 million, only 103,000 jobs were added in December according to the Labor Department’s BLS report — a number significantly lower than expected. (The Wall Street Journal reported that many Wall Street analysts were predicting “at or above 200,000” new jobs.)

The news gets worse: less than half of the drop in unemployment rate can be attributed to new job creation — the other half came from 260,000 Americans who have dropped out of the labor force altogether.

This brings the percentage of Americans who are either employed or actively looking for work down to 64.3 percent, what economist Heidi Shierholz calls “a stunning new low for the recession.”

“We have now added jobs every single month for a year,” Schierholz said. “So you would think that there would be labor force growth, these missing workers starting to come back in. Not only is that not happening, it’s actually starting to go in the other direction. There’s never been a pool of missing workers this large. It’s not clear to me when they’ll come back.”

That can’t be good, no matter what the White House and CNN try to get us to swallow.

At the Wall Street Journal the reaction to the jobs report doesn’t make things sound much better. One headline reads: Markets Whipsawed After Jobs Report. Here’s the gist:

Investors hoped that the jobs report would confirm expectations that a robust recovery was finally filtering through to long-stagnated labor markets. But after traders positioned aggressively this week on lofty expectations of a strong payrolls figure, the disappointing data had a relatively muted impact.

The Labor Department reported that the U.S. economy created 103,000 new positions last month, far below market consensus expectations for a 150,000 gain. In November, the economy added 39,000 jobs. The unemployment rate fell sharply to 9.4% from 9.7%.

Sustainable job creation has been elusive in an economy that is still recovering from the 2008 financial crisis. As a result of the troubled job market, analysts think the Federal Reserve is likely to continue full steam ahead with its controversial $600 billion plan to reinflate the economy.

Dakinikat can give us her expert take on this, but as a layperson, I think it’s obvious that the country is on the wrong track and some one needs to light a fire under the President and his incompetent economic advisers. 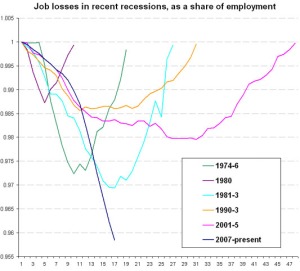 One glance at the national income accounts for the U.S. gives us the bottom line. Approximately 67 % of the spending in the country comes from households and nearly the same proportion of the source of that spending comes from wages and salaries. It may be all about oil revenue in places like Venezuela and Kuwait, but in the United States, it’s all about job creation. The job losses in this Great Recession–when compared with the other post-WW2 recessions–are much worse as you’ll see in the graphic on the left.

The news from the jobs market is bleak and that is one of the reasons I have trouble buying any green shoot hoopla. Take this headline from the Wall Street Journal “Cuts are Here to Stay, Companies Say”.

Many companies that have cut jobs, pay and benefits during the recession may not be quick to restore them.

According to a new survey, 52% of companies expect to employ fewer people in three to five years than they did before the recession began. The survey of 179 companies was conducted this month by consulting firm Watson Wyatt Worldwide Inc.

Among employers who have cut salaries, 55% expect to restore the cuts in the next year. But 20% expect the cuts to be permanent. Of employers who have increased employee contributions to health-care premiums, 46% don’t plan to reverse the increases. Of all survey respondents, 73% said they expect employees to shoulder more of the cost of health care than before the recession began.

The job market always lags the business cycle since companies are really slow to both fire and hire near the turning points. Companies like to insure they are not letting trained workers go needlessly and they don’t like to take on any costs if their revenues aren’t trending upward. Of course, recessions hit different segments of the labor market differently. A Weekly Standard headline “No Country for Burly Men” has one of the most interesting examples of the demographics of the Great Recession.

A “man-cession.” That’s what some economists are starting to call it. Of the 5.7 million jobs Americans lost between December 2007 and May 2009, nearly 80 percent had been held by men. Mark Perry, an economist at the University of Michigan, characterizes the recession as a “downturn” for women but a “catastrophe” for men.

Men are bearing the brunt of the current economic crisis because they predominate in manufacturing and construction, the hardest-hit sectors, which have lost more than 3 million jobs since December 2007. Women, by contrast, are a majority in recession-resistant fields such as education and health care, which gained 588,000 jobs during the same period. Rescuing hundreds of thousands of unemployed crane operators, welders, production line managers, and machine setters was never going to be easy. But the concerted opposition of several powerful women’s groups has made it all but impossible. Consider what just happened with the $787 billion American Recovery and Reinvestment Act of 2009.

END_OF_DOCUMENT_TOKEN_TO_BE_REPLACED

With the release of financial regulation reform and healthcare reform that has Wall Street breaking open the bubbly, I just want to join the chorus of highly skeptical economists. The tune of the last few days is hard to miss. Take this piece from the NY Time’s Dealbook as an example: Only a Hint of Roosevelt in Financial Overhaul. There’s also Paul Krugman’s Op-Ed Column today Out of the Shadows which is the typical on-the-one-hand-on-the-other hand economist behavior. (Could I just mention in passing that I like the OLD Paul better? The one that was an out spoken advocate for liberal economists? I’m not sure what happened at that White House Dinner, but I’m beginning to think we now have a Manchurian economist at Princeton. Oh, where is our Shrill One?) Oh, and you can still read my first impressions here. I’m going to start with Financial Reform but don’t leave me yet. Brad deLong takes on Christine Romer’s The Lessons of 1937 at The Economist and since he still hasn’t been invited to dinner at the White House, it’s classic Brad.

So what does Krugman think about the Alphabet Soup Agency reheat slugging its way through that perpetual Hall of Wall Street minions we know as our Congress? He believes that it throws some light on the shadow banking industry in that the Alphabet Soup gang at the FED get to see more balance sheets and books. There is also a stab at standardizing the process, but custom fitted Credit Default Swaps remain. The essential riskiness remains. Let’s examine the Krugman critique.

But what about the broader problem of financial excess?

President Obama’s speech outlining the financial plan described the underlying problem very well. Wall Street developed a “culture of irresponsibility,” the president said. Lenders didn’t hold on to their loans, but instead sold them off to be repackaged into securities, which in turn were sold to investors who didn’t understand what they were buying. “Meanwhile,” he said, “executive compensation — unmoored from long-term performance or even reality — rewarded recklessness rather than responsibility.”

Unfortunately, the plan as released doesn’t live up to the diagnosis.

Well, maybe the White House Pastry chef did not completely overwhelm the shrill one.

Tellingly, the administration’s executive summary of its proposals highlights “compensation practices” as a key cause of the crisis, but then fails to say anything about addressing those practices. The long-form version says more, but what it says — “Federal regulators should issue standards and guidelines to better align executive compensation practices of financial firms with long-term shareholder value” — is a description of what should happen, rather than a plan to make it happen.

Furthermore, the plan says very little of substance about reforming the rating agencies, whose willingness to give a seal of approval to dubious securities played an important role in creating the mess we’re in.

In short, Mr. Obama has a clear vision of what went wrong, but aside from regulating shadow banking — no small thing, to be sure — his plan basically punts on the question of how to keep it from happening all over again, pushing the hard decisions off to future regulators.