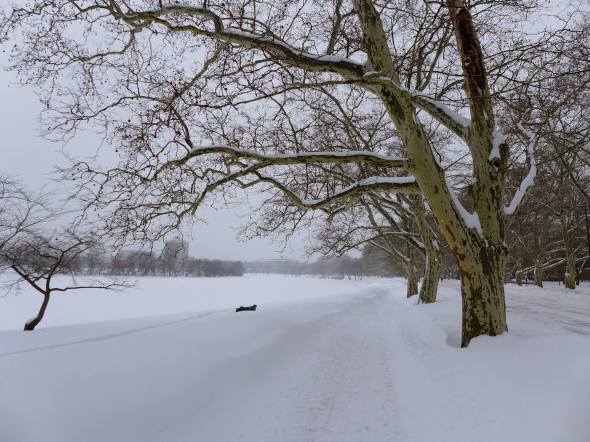 Scene along the Charles River in Cambridge

This morning I have reached the point where I can’t think of anything else but dealing with snow. I hope you’ll forgive me for being too self-involved to focus on much more than surviving the terrible onslaught we’re going through here in Greater Boston. I’m going to share some photos and news about the mess we’re in here before I get to anything else.

The photo above was taken by my sister-in-law. Here are a couple more of her lovely photos of Cambridge.

Another view of the Charles River

One of Cambridge’s narrow streets

BOSTON — Snow-choked New England braced for more winter grief later in the week as people dug out from another 2 feet of snow Tuesday. Thousands of angry Boston commuters stranded by a transit shutdown scrambled to find other ways to get to work.

As people struggled to find places to put the latest snow, and officials considered dumping it by the truckload into the ocean, forecasters warned that yet more snow was possible Thursday and again over the weekend.

That’s right, folks. Even after we’ve set multiple records for snowfall over the past couple of weeks, we are expecting more storms. Some of the effects on the region so far:

Boston-area subways, trolleys and commuter rail trains ground to a halt at 7 p.m. Monday and remained idle Tuesday, with only limited bus service continuing. The Massachusetts Bay Transportation Authority said it needed the break to clear snow and ice from tracks and to assess equipment damaged by the spate of storms….

Boston hospitals set up sleeping areas for workers and police were offering rides to work for doctors and nurses.

Massachusetts environmental officials gave cities and towns with no place else to put accumulating snow the green light to dump some into the ocean or other bodies of water if necessary.

The Department of Environmental Protection on Monday cited the challenges involved in getting rid of the historic snowfalls. Local communities may seek permission to take emergency steps that allow disposal of snow into open water, which is normally prohibited. Officials also were using giant melters to liquefy snow. 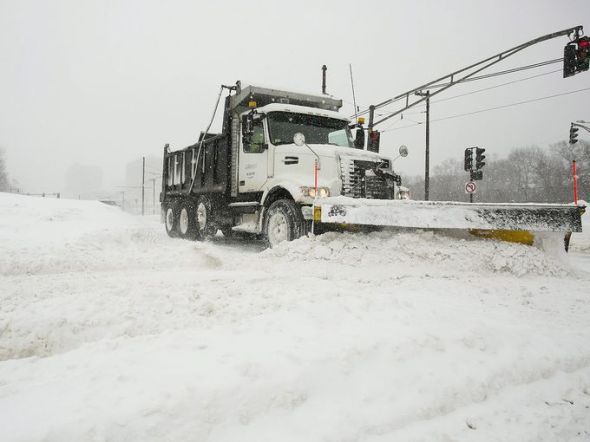 Here’s why the T had to shut down. From The Boston Globe: Passengers stuck on Red Line train for more than two hours.

More than 40 passengers were safely evacuated from a southbound Red Line train that became stranded for more than two hours between stations in Quincy due to a power failure, MBTA officials said.

Spokesman Joe Pesaturo said the train lost power around 7 a.m. Monday, and the final passengers were escorted out of the cars around 9 a.m….

“The tracks are completely exposed to the storm conditions,” said Pesaturo. “The third rail was completely covered by heavy snow. The train could not move because of a lack of power.”

Pesaturo said the 48 passengers were safely taken off the train and transferred to a bus.

The next storm is due soon. From The Globe: Up to 6 more inches of snow on the way.

The National Weather Service is predicting the snowfall for a 24-hour period from 7 a.m. Thursday to 7 a.m. Friday.

A map generated by the National Weather Service at 4:46 a.m. Tuesday shows higher accumulation in Eastern Mass., and predicts 2 to 3 inches for most of the area outside of I-495. 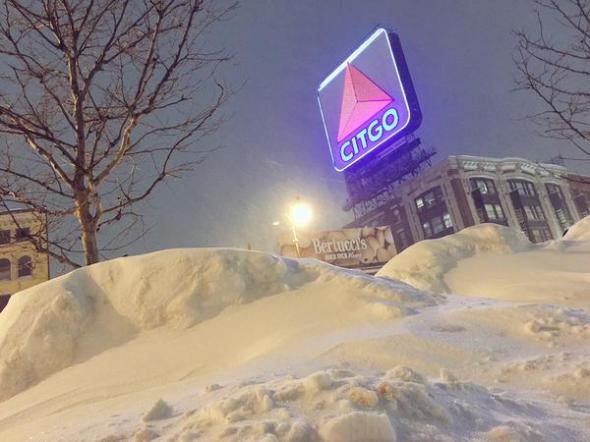 For some strange reason, there is a small area of Greater Boston that is taking the brunt of these storms. That’s the area I live in.

Thursday’s expected snowfall comes amid a record period for the Boston area, in which about 6 feet has fallen over a 30-day period, beating the previous record of 58.5 inches, which was set in 1978.

The National Weather Service said 76.5 inches have fallen in Boston this winter season through 7 p.m. Monday.

But that won’t be the end of it, according to The Weather Channel. There’s another storm expected on Valentine’s Day weekend.

It is still too soon (4+ days out) to determine whether the offshore low will track close enough to bring heavy snow to parts of New England and the Northeast. If a closer low track (heavier snow) would take place, peak impacts would occur Saturday night into Sunday with the heaviest snow in coastal New England.

Regardless where the low tracks, behind the arctic front and intensifying offshore low — you guessed it — bitterly cold air will settle in, driven by strong winds, leading to dangerous wind chills and areas of blowing/drifting snow. Temperatures may remain stuck in the single digits or, at best, teens much of Sunday in New England, with morning lows in the single digits above or below zero.

Honestly, I was doing pretty well until yesterday, when I discovered that I couldn’t open my front door. It was frozen shut. I went out through the garage and, with the help of a neighbor, got the door to open. Unfortunately, it wouldn’t close all the way and I couldn’t lock it anymore. Stupidly, I locked the storm door.

This morning, the front door is again frozen shut and I won’t be able to open it from the outside because of my stupid decision to lock the storm door. I’ll have to try to get the door open with a hairdryer or go in and out through the garage. Don’t even ask about the back door. That would require digging a long pathway through at least four feet of snow.

I guess I need to call a waaaambulance. If I sound discouraged, I’m not alone. From the Globe: Unrelenting snowfall darkening our moods.

From commuting odysseys to back-wrenching shoveling and days without a drop of sunshine, this winter’s unrelenting snow is wrecking the region’s collective psyche.

Precious free time for trips to the gym, often a psychological balm, has largely vanished. Ditto for meeting friends or gathering with family.

For many, a single-minded focus on navigating the avalanche of storms can weigh heavily, therapists said Monday.

“It is assaulting people,” said Barbara Green, a psychologist at the Center for Integrative Counseling and Wellness in Hingham. “Even strong, resilient, upbeat people are starting to feel a bit frayed emotionally.”

Green said she is hearing from patients that normal daily stresses — commuting, working, taking care of a family — seem magnified many times over, especially for people with low-paying jobs who do not have the luxury of missing a day at work. 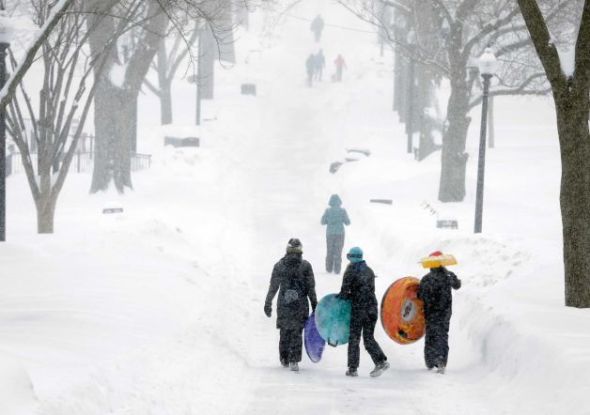 An 11 a.m. press conference in Charlottesville on Tuesday will reveal that Jesse Matthew Jr. has been charged with first-degree murder in the death ofHannah Graham according to CBS 6 sources….

Matthew, 32, is currently charged with the abduction with intent to defile, in Graham’s disappearance. She was in her second-year at the University of Virginia.

Graham was last seen leaving a Charlottesville bar with Matthew, on Sept. 13. Her remains were found on an abandoned property in Albemarle County on Oct. 18.

Graham’s body was discovered roughly five miles from where Morgan Harrington’s body was found in Albemarle County in January 2010. In November 2014, police forensically linked Harrington to Matthew when his DNA was found on the black “Pantera” shirt she wore the night of her disappearance.

The 20-year-old Harrington, who was a Virginia Tech student, disappeared outside of the John Paul Jones Arena in Charlottesville while attending a Metallica concert on Oct. 17, 2009.

Matthew is currently incarcerated in Fairfax County, where he is facing attempted capital murder, rape, and sexual assault charges relating to the attack and rape of a Fairfax woman in 2005. DNA has also linked him to this case.  He will remain behind bars in Fairfax until his trial on March 9.

City worker tries to clear a sidewalk in downtown Boston

USA Today, Strauss-Kahn: I didn’t know those women were prostitutes.

Strauss-Kahn, 65, was testifying at a court in northern France for his alleged connection with a prostitution ring at a hotel in Lille.

“I committed no crime,” Strauss-Kahn, once thought to be a contender for the French presidency, said in a letter read to the court as he took the stand.

The Guardian, US prosecutors weigh criminal charges against HSBC as Warren turns up the heat.

The US Department of Justice is considering bringing criminal charges against HSBC and its executives as part of its investigation into whether the bank’s Swiss subsidiary helped US clients evade taxes.

Democratic senator Elizabeth Warren called on prosecutors to “come down hard” on HSBC if the bank is found to have colluded with tax evaders on Tuesday.

Her intervention came as US government officials with knowledge of the DoJ’s investigation provided the Guardian with new details about the inquiry.

Renewed focus has been placed on the long-running investigation into HSBC Switzerland by the department, after a huge leak of secret bank data – passed to the DOJ’s tax division almost five years ago – was obtained by the Guardian and other media.

It shows that HSBC Switzerland helped some clients conceal millions of undeclared assets, and has immediately raised questions on Capitol Hill about the response from prosecutors and tax authorities. 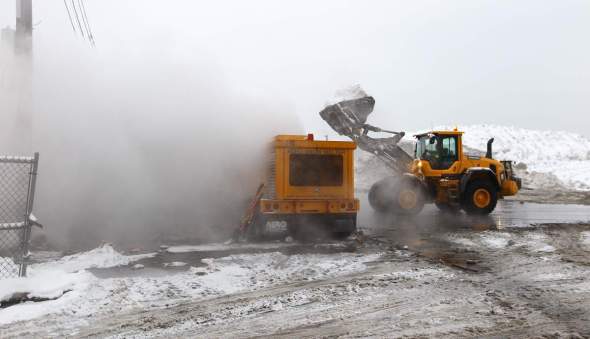 WaPo, Was Brian Williams terrorized by gangs at the Ritz-Carlton during Katrina?

The Independent UK, Charles Manson wedding off after it emerges that fiancee Afton Elaine Burton ‘just wanted his corpse for display’.

NY Daily News, Baby born carrying twin fetuses (Please don’t tell the anti-abortion crowd about this one, or that poor little baby could be in big trouble).

The stories I found are somewhat lurid today. I don’t know if that’s because of my mood or a real reflection of what’s happening. Please post your recommended reads in the comment thread, and have a terrific Tuesday!