“Mo’s service on the front lines in our efforts to manage through the worst economy in 80 years and build a better, stronger Commonwealth for the next generation has earned him the respect and admiration of people throughout government,” Patrick said in a statement announcing the appointment.
Former Rep. Barney Frank (D-Mass.) had also pursued the seat, but his outspoken interest might have undermined his chances of winning the appointment.

Patrick will make the official announcement at 11AM this morning.

Some background on Cowan from The Boston Globe:

Cowan is a North Carolina native and Duke University graduate who came to Boston to attend Northeastern University Law School in the early 1990s – and never left the region. One of the city’s leading African-American lawyers, Cowan is a former partner in the politically connected law firm of Mintz Levin.

Cowan will become the first African-American to represent Massachusetts in the Senate since Edward Brooke held the seat as a Republican from 1966 to 1978….

Patrick and Cowan built up a strong friendship over the years, in part, because both men have risen from difficult childhoods to prominence in Boston and in the state. Patrick also served as a mentor to Cowan when both were practicing lawyers.

Much more at the link. 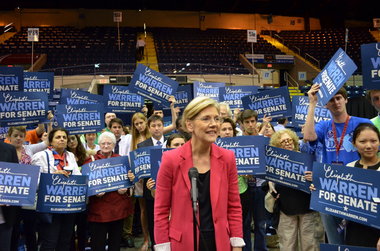 Elizabeth Warren has won the endorsement of the Massachusetts Democratic Party at their Convention today in Springfield. She is now the official candidate of the Party and will not need to face a primary opponent.

Democratic U.S. Senate candidate Elizabeth Warren won her party’s overwhelming endorsement on Saturday, shutting out a potential primary election opponent and becoming the presumptive nominee to face Republican Sen. Scott Brown in what is expected to one of the nation’s most expensive and closely-watched Senate races.

Warren won the votes of 95.7 percent of the more than 3,500 delegates to the state Democratic convention, the largest margin of any candidate in a contested race in the party’s history.

Marisa DeFranco, an immigration attorney from Middleton, had waged a longshot campaign for Senate but finished far below the 15 percent she needed under party rules to get on the September primary ballot. Democratic party chair John Walsh had said as early as Saturday morning that he expected DeFranco to reach the threshold.

Warren is still dealing with the Breitbart-inspired attacks on her claim of Native American ancestry, and she referred to right wing smear campaign in a a “feisty” speech today, according to The New York Times.

“It’s a long way from Ted Kennedy to Scott Brown,” Ms. Warren said in a feisty speech here on Saturday to the roughly 3,500 delegates to the state convention, invoking the name of the lionized Democrat. Mr. Kennedy’s death in 2009 led to the special election in which Mr. Brown won the seat.

She also dismissed the controversy in which her campaign has been mired for more than a month — whether she unfairly claimed American Indian ancestry to advance her academic career.

“If that’s all you’ve got, Scott Brown, I’m ready,” she declared to cheers. “And let me be clear. I am not backing down. I didn’t get in this race to fold up the first time I got punched.”

Hang in there, Liz! You’ve got what it takes.