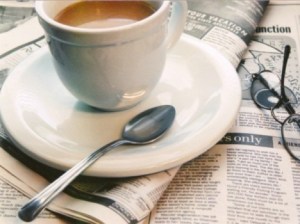 Good Morning!! Let’s take a look at what’s happening in the news today.

The Daily Mail has some excerpts from a new book about the Osama bin Laden assassination mission. Apparently President Obama was out on the golf course until about 20 minutes before it all went down.

The claims are from Chuck Pfarrer, a former SEAL team commander, in a book called SEAL Target Geronimo.

He has spoken to several of the men who carried out the operation at Bin Laden’s mansion hideout in Abbottabad, Pakistan, on May 2.

Mr Pfarrer paints a very different picture to the official photo released at the time which shows Mr Obama and advisers huddled round a table in the White House situation room as footage was beamed from a drone 15,000ft above the al-Qaeda leader’s mansion.

Mr Pfarrer says the President’s role was largely inflated and suggests he stayed out on the golf course for so long so he could distance himself in case it went wrong. Mr Pfarrer writes: ‘If this had completely gone south, he was in a position to disavow.’

Pfarrer also claims that “when they burst into Bin Laden’s room, his wife screamed: ‘No, no, don’t do this… it’s not him!'”

More horrible details keep coming out about the child sexual abuse scandal at Penn State. Here’s a timeline of events published by CNN. The reports of assistant coach Jerry Sandusky go back as far as 1994, and it’s clear that head coach Joe Paterno was aware of Sandusky’s behavior. In 1998, there was an investigation by Penn State Police and Pennsylvania Department of Public Welfare of Sandusky showering naked with an 11-year-old boy. The incident was reported by the boy’s mother. Are we supposed to believe that Paterno wasn’t informed of this investigation? Give me a break!

So first, Paterno minimizes the incident in his report and then nothing is done and Paterno just lets it slide. But apparently Paterno isn’t a target in the case.

Quite a few writers are calling for Paterno to resign, however. From the LA Times:

In 46 seasons as the football coach at Penn State University, Joe Paterno appeared to create a culture of winning and decency he called “Success with Honor.”

Now that the culture has been exposed as a haven for an alleged child molester, Paterno needs to do the honorable thing and resign before he coaches another game.

It’s sad that the winningest coach in major college football history will end his career with a giant “L” in the human-being department, but not nearly so sad as the idea that boys may have been abused because football’s most controlling boss did nothing.

From Lawyers, Guns, and Money:

There can be little doubt that Paterno has known since at least 1998 that Sandusky had a “problem” with “inappropriate behavior” toward children, i.e., he was a child molester. That’s when the campus police did a six-week investigation after a mother reported to them that her 11-year-old son had showered with Sandusky. From the grand jury report:

The mother of Victim 6 confronted Sandusky about showering with her son, the effect it had had on her son, whether Sandusky had sexual feelings when he hugged her naked son in the shower, and where Victim 6′s buttocks were when Sandusky hugged him in the shower. Sandusky said he had showered with other boys and Victim 6′s mother tried to make him promise never to shower with a boy again but he would not. She asked him if his “private parts” had touched Victim 6 when he bear-hugged him. Sandusky replied, “I don’t know . . . maybe.” At the conclusion of the second conversation, after Sandusky was told he could not see Victim 6 any more, Sandusky said, “I understand. I was wrong. I wish I could get forgiveness. I know I won’t get it from you. I wish I were dead.”

To put it mildly, it’s extremely unlikely that in a little town like State College, PA, word of this investigation didn’t get back to Paterno. This supposition is bolstered by Sandusky’s otherwise strange “retirement” the following year.

Paterno should be prosecuted, but because of his reputation, he won’t. At the very least, he should lose his job.

According to the National Journal, President Obama is considering issuing an executive order that would deal with an “earmark workaround” that members of Congress have been using.

In a move that could escalate hostilities with Congress, President Obama may be planning to use his executive authority to publicize special funding requests that lawmakers make for pet projects.

A memo that the White House has floated on Capitol Hill would require executive branch agencies to make public any letter from a member of Congress seeking special consideration for any project or organization vying for government funding….

The threat to name and shame would potentially cut off another avenue members of Congress have for influencing government spending in their own back yards. It comes at a time that Obama is ratcheting up his campaign rhetoric against Congress, which he blames for blocking his efforts to stimulate the economy, on the eve of his 2012 reelection effort.

Chicago police on Monday issued citations to 43 senior citizens and their supporters who linked arms to block an intersection near the city’s financial district.

The action was part of a protest against proposed cuts to Social Security, Medicare and other benefits.

The Jane Addams Senior Caucus (JASC), their supporters and “Occupy Chicago” began the demonstration with a rally outside the office of Illinois Sens. Mark Kirk (R) and Dick Durbin (D). The group, which organizers claimed was nearly 1,500-strong, then marched to the Federal Plaza.

Traffic at the intersection of Jackson Boulevard and Clark Street was blocked for about an hour, according to the Chicago Tribune.

“At every level of society, Americans are under attack,” said Karen Bocker, an “Occupy Chicago” participant and grandmother of four.

Matt Yglesias learned yesterday that Noam Chomsky had mentioned him unfavorably in a speech on receiving a Peace Prize in Sydney, Australia. Be sure to read Yglesias’ convoluted explanation of International Law as it relates to the state murder of Osama bin Laden. One commenter wrote that Yglesias had achieved a

Fantastic career milestone. Every pundit needs a personalized bitchfest with someone more famous. Next, Matt should try getting into a fistfight with Norman Mailer, or get into a William F. Buckley/Gore Vidal-esque television spat with Andrew Sullivan.

The fistfight with Norman Mailer would certainly be entertaining, since Mailer died in 2007. How about a beer drinking contest with the ghost of Jack Kerouac?

Politico reports that Herman Cain will hold a press conference in response to the allegations by Sharon Bialek.

CNN and ABC News’ Michael Falcone are reporting that Herman Cain, who has said he’s not commenting and it’s the “end of story” several times in the past week, will hold a press conference in Arizona tomorrow to address the latest allegations today, made by Chicago single mom Sharon Bialek.

In a series of tweets, Falcone also said the Cain campaign is questioning Bialek’s motives.

I guess he’ll also have to answer questione about a fifth woman.

A former USAID worker claims Herman Cain asked her to set up dinner with a woman who attended a speech he gave in 2002, the Washington Examiner is reporting tonight.

The worker – 40-year-old Donna Donella, of Arlington – told the paper that the moment came after Cain gave a paid speech in Egypt that year. A woman in the crowd posed a query to Cain during the speech, the Examiner said.

Donella told them “And after the seminar was over, Cain came over to me and a colleague and said, ‘Could you put me in touch with that lovely young lady who asked the question, so I can give her a more thorough answer over dinner?’”

She was “suspicious of Cain’s motives and delined to set up the date,” the Examiner reporter wrote.

That’s what I’ve got for today. What are you reading and blogging about.