Yesterday, on the 16 anniversary of Katrina, Ida made landfall in Louisiana as a category 4 hurricane. Dakinikat weathered the storm, but all of New Orleans is now without power and 911 service. Last night, the storm moved west into Mississippi, where it was downgraded to a tropical storm that will affect the state throughout today. Here’s the latest:

A massive failure of the transmission system that brings electricity to New Orleans and the east bank of Jefferson Parish left the city completely without power as Hurricane Ida slammed the area and it’s not clear how long the problems will take to fix.

The problems during the storm took all eight electricity-transmission lines into the area offline, including one massive tower on the west bank that collapsed into the Mississippi River. Now, the New Orleans area could spend an extended period, perhaps days but potentially much longer, without electricity in the summer heat and during a hurricane season that will continue after Ida has departed.

The failure raises questions about New Orleans’ plan to use Entergy power to replace the Sewerage & Water Board’s antiquated turbines as the primary source of power for the city’s drainage system. City Council members who chair the committees that regulate Entergy and oversee the S&WB said the outage would prompt investigations into the power company and would require further scrutiny of the S&WB plan.

Failures of the transmission system during Hurricane Gustav in 2008 and Hurricane Laura last year left huge swaths of the state without power for days or weeks.

Mayor LaToya Cantrell urged residents to stay in their homes and New Orleans Police Department Superintendent Shaun Ferguson said “anti-looting” officers would be deployed due to the outage.

The full details of what went wrong with the transmission system were not yet known and Ida’s strong winds kept crews from fully evaluating the system on Sunday.

Bourbon Street as Ida began to move in

The 911 system is not working in Orleans and Jefferson parishes in the aftermath of Hurricane Ida, officials said Monday morning.

In Orleans, if you have an emergency, officials said you should go to your nearest fire station or approach a police officer.

In Jefferson Parish, officials said you should call 504-227-1400, which is the administrative number for the 911 Center, if you can’t get through by dialing 911.

Dakinikat just texted that she walked to her local fire station to report a downed tree on a power line. She also talked to some neighbors, one of whom said they heard it could take 6 weeks to restore all power. Her house is OK, but a couple of big branches broke off her magnolia tree. She has been posting some updates to her Facebook page.

The partial loss of generator power Sunday at a Louisiana hospital in the path of Hurricane Ida sent doctors and nurses scrambling to keep patients breathing as they moved them to a different area.

Patients at Thibodaux Regional Health System in Lafourche Parish were bagged by hand, meaning hospital staff manually pushed air in and out of their lungs in place of mechanical ventilation, while they were transported to another floor, according to officials with the Louisiana Department of Health. Other generators in the hospital are still in working order, according to Dr. Joe Kanter, the state’s chief health officer, as workers and patients there continue to ride out the storm.

Officials from Thibodaux Regional Health System posted on social media around 7 p.m. Sunday that “the backup generator that was affected earlier by winds from the hurricane is back online at the current time.”

USA Today: Hurricane Ida was so powerful it reversed the flow of the Mississippi River.

As the powerful Hurricane Ida roared ashore in Louisiana on Sunday, the storm’s force was so strong it temporarily reversed the flow of the Mississippi River.

Hitting as a Category 4 storm, Ida’s winds snapped trees and tore roofs off buildings as its floodwaters blocked roads and submerged cars. The storm was expected to dump up to 2 feet of rain in some areas and bring up to 7 feet of storm surge. Over a million people in Louisiana were without power. 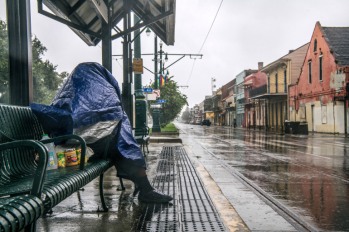 NEW ORLEANS, LOUISIANA – AUGUST 29: A person sits at a train stop for shelter ahead of Hurricane Ida on August 29, 2021 in New Orleans, Louisiana.

A U.S. Geological Survey gauge at Belle Chasse, south of New Orleans, detected the Mississippi’s flow moving backward around midday Sunday  because of the amount of water Ida whipped up.

Although rare, the river changing course is not unprecedented, occurring during Hurricane Katrina in 2005 and Hurricane Isaac in 2012.

The Washington Post: Ida weakens to tropical storm as it moves to Mississippi with destructive winds, heavy flooding.

The storm weakened 16 hours after Ida made landfall in Louisiana as a Category 4 hurricane. Ida battered Louisiana into Monday, with reports of downed power lines, levee failures and flooding, collapsed buildings and trapped residents on rooftops.

Forecasters warned that flooding from storm surges will continue through Monday morning in parts of Louisiana and Mississippi. As Ida’s center moves into southwestern Mississippi, damaging winds could cause more power outages. Heavy rainfall is possible through Tuesday morning across southeastern Louisiana, coastal Mississippi and southwestern Alabama.

Flooding could also hit portions of the Tennessee and Ohio valleys and the Mid-Atlantic through Wednesday, according to the National Hurricane Center.

Here’s what to know

— Officials in Louisiana implored residents to take precautions Monday morning. In a tweet, Gov. John Bel Edwards (D) told residents to “remain where you are.” The National Weather Service in New Orleans urged people to “be EXTREMELY safe today as weather hazards remain in effect.”

— New Orleans’s 911 services are experiencing “technical difficulties,” and residents are instead being urged to seek help in person from first responders.

— At least one person was killed after a tree fell on them in Prairieville, La., about 65 miles northwest of New Orleans, according to the Ascension Parish Sheriff’s Office.

In an ever-more-internet-connected world, we are getting close-up views of extreme weather in ways that were hard to imagine a generation ago.

When Hurricane Ida barreled ashore and ransacked the Louisiana coast on Sunday, we were able to see the storm surge inundate Grand Isle through remote video cameras that were installed by storm chasers.

Locals also uploaded web-connected security camera footage of the rising waters to social media and streamed the winds on Facebook Live. Reporters weren’t embedded in these coastal and low-lying areas because the danger was simply too great, so webcams were the main way to assess the damage on Sunday.

Later in the day, as the center of Ida moved closer to New Orleans, residents posted panicked pleas for help on Twitter and other sites. Local reporters shared videos of homes that have been flooded. Other videos on Twitter and Instagram showed debris flying through the air in New Orleans.

Traffic cameras and levee monitoring webcams also provided dozens of views from inside the storm.

Some locations lost power and/or internet connectivity, but an impressive number of the cameras remained online throughout the day. It was the latest sign that the way we witness landfalling hurricanes is changing — perhaps providing a more visceral education for the public. Can all the live feeds and social snapshots, showing the real-time reality of the weather, cause viewers to take the threat more seriously?

And/or do some folks see the video clips and decide to head outside with their own cameras? “A video of a man plowing headlong into storm surge from Hurricane Ida garnered a stern warning from National Weather Service officials,” urging everyone to stay inside, Missy Wilkinson of The Advocate reported Sunday afternoon.

Storm chasers could not be dissuaded. Numerous chasers showed Ida’s storm surge pouring into towns like Golden Meadow, Larose and LaPlace. One camera crew said they were surrounded by water but were safe at a Motel 6 with high-enough ground.

By nightfall, a man on Twitter who called himself an oil field worker had posted a video from the actual site of the landfall, Port Fourchon, showing a toppled crane and other damage. Through texts, video clips and live streams, we’re experiencing hurricanes in new ways.

More stories to check out today:

David Rothkopf at The Atlantic: Biden Deserves Credit, Not Blame, for Afghanistan.

The New Republic: Be Glad Donald Trump Isn’t Running the Show in Afghanistan.

Russell Berman at The Atlantic: The Obvious Voting-Rights Solution That No Democrat Will Propose. The answer to one of the most vexing debates in American politics is an idea that everyone hates.

Adam Jentleson at The New York Times: When Will Biden Join the Fight for Voting Rights?

That’s all I have for you today. I’ll have to do another post tomorrow. Take care everyone!