I started to look for the picture of the Brittany guy for the title I choose today when I found out some one at Twitchy had grabbed it first.  I’ve never seen a bunch of whiny over sensitive old white guys–both on the Bernie Bro side and the Rightish side of the Political spectrum–that have their panties in a bunch about Neera Tanden.

What Twitchy did was send me to Politico and this article. “Neera Tanden Got Twitter Right—And That Was Her Problem.  But Twitter has a way of turning on you.”  All you really have to be in the world of Joe Biden’s appointments is to be a woman of color associated with Hillary Clinton and damn sharp at critical thinking and the white guys pee themselves.  I swear.

Twitter was designed to tempt you into angry tweets. It's also made it very easy for a broad coalition of enemies to unite to take down one person. It was only a matter of time until it happened in politics, too. https://t.co/1fTKBnkl3C

I believe this is called cyber bullying and the hypocrisy on the right side of the aisle is just over the top!  They support the king of the nasty ass twitter trolls but gang up if a woman criticizes them or their politics or for Pete’s sake their daughter who price gouges diabetics?  PUHLEEEZZEEE!   This is from Politco and  Joanna Weiss: “Neera Tanden Got Twitter Right—And That Was Her Problem – POLITICO.  So what’s the bottom line here?  It’s Politico, afterall so deep breath.

The internet is overflowing with snarky diatribes about Senators Susan Collins and Ted Cruz and Mitch McConnell. A veteran political player, who might someday need Cruz or Collins or McConnell for a vote, should have known it would do her no good to pile on. And, on some level, she did know: In 2016, she told an interviewer, “I’m willing to concede I should tweet less.”

Instead, Tanden did what a lot of us do: She went for the dopamine hit, again and again. Over the past few years, she tweeted that “a vampire has more heart than Ted Cruz,” compared McConnell to Voldemort, and called Collins “criminally ignorant.” It wasn’t just Republicans she angered; she was also known for tweaking left-wing rivals like Senator Bernie Sanders, suggesting in one tweet that Russia had helped Sanders in the 2016 election. Some have detected sexism in the sudden rush to scold her, but Tanden stands out among Biden’s Cabinet nominees for the edginess of her social media posts.

So, after years of Trumpist Trolling on twitter and the tv and just about everywhere the outrage is going to fall on Tanden?  Some one tells these guys politics requires thicker skin then that.  Even Joe the plumber and former pol gets it.

Neera Tanden’s politics are not my politics. But what’s happening to her right now is wrong. It’s ugly, cowardly bullshit.

So, comparing Cruz to Voldemart is nowhere near as bad as what some of his colleagues say about him or what Trump has said about him.  Again, why the focus on Neera?   Just today, AXIOS reports that Former Speaker of the House John Boehner said Cruz could “go fuck himself”.   Where’s the pearl clutching on that?

John Boehner has been going off script while recording the audio version of his new memoir, using expletives and asides not in the book — such as the former Republican House speaker saying, “Oh, and Ted Cruz, go f**k yourself.”

Why it matters: The book is appropriately titled, “On the House: A Washington Memoir.” It promises to share “colorful tales from the halls of power, the smoke-filled rooms around the halls of power and his fabled tour bus.” Two sources familiar with the tapings told Axios about the asides.

And let’s not forget this moment earlier this month: “Lawmakers Are Reading Hilariously Mean Tweets About Ted Cruz On The Senate Floor, And People Are Absolutely Delighted”.  They were actually reading Tanden tweets and it rather backfired on them

If you were wondering who the most disliked politician on Capitol Hill was, the answer is Ted Cruz.

The Republican senator from Texas got dragged by his fellow lawmakers while they were attempting to dig into the background of Neera Tanden, President Biden’s pick to lead the Office of Management and Budget. During Tanden’s confirmation hearing, Republican senator attempted to point out how damning Tanden’s social media posts — many of which condemned Republican party leaders like Mitch McConnell and Cruz — were in light of Biden’s appointment. They wondered if she could do a good job of sticking to the president’s commitment to bipartisanship after calling McConnell “Moscow Mitch” and Senator Tom Cotton a “fraud.”

What they didn’t realize was they were giving audiences a live Mean Tweets reading on the Senate floor, and that their colleague, Cruz, would get the worst of it.

A lot of people, Republican and Democrat, can’t stand Ted Cruz but Tanden’s tweets managed to trash the insurrection-supporting senator with some truly stunning linguistic verbosity. At one point, Tanden was accused of tweeting that “vampires have more heart than Ted Cruz,” which, just … wow.

Okay, so enough on that and again, I seem to just have a thing for showing the ragging Cruz takes from every one.  Oh wait, just one quote from Lindsay Graham and I’ll move on, I promise!!   From CNN: “Lindsey Graham jokes about how to get away with murdering Ted Cruz”.

South Carolina Republican Sen. Lindsey Graham thinks his party has gone “bats—” crazy, and joked Thursday that it’s possible to get away with murdering Ted Cruz if it happened in the Senate.

“If you killed Ted Cruz on the floor of the Senate, and the trial was in the Senate, nobody would convict you,” the former presidential candidate said at the Washington Press Club Foundation’s 72nd Congressional Dinner, referencing the Texas senator’s unpopular reputation on Capitol Hill.

And then, read further about what he said about Hillary Clinton and Nancy Pelosi.  See, it’s okay to continually call Hillary crooked as long as you’re a white guy.

The Parliamentarian’s ruled that the minimum wage bump to $15 an hour can’t go into the Covid relief bill and the reconcilliation process.   The House is set to pass the $1.9 Billion relief package today.      A number of Democrats want to take the same path Republicans did when they fired a parlimentarian twenty years ago.  This is from WAPO today: “Some Democrats want to fire the Senate parliamentarian who scuttled $15 minimum-wage plans. It’s been done once before”.

But at least one lawmaker called for an even more radical solution: firing the Senate’s referee.

“Abolish the filibuster. Replace the parliamentarian,” Rep. Ilhan Omar (D-Minn.) said in a tweetThursday.
“What’s a Democratic majority if we can’t pass our priority bills? This is unacceptable.”

The Biden administrationshowed little appetite to challenge MacDonough following her ruling on Thursday, saying it was “disappointed” but would move forward with the stimulus without the minimum-wage increase. 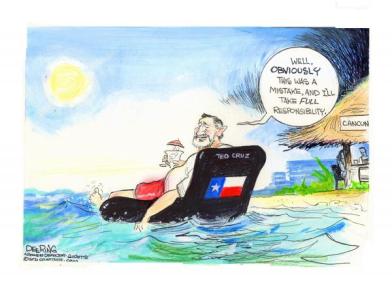 Of course, the Republicans fired the Parlimentarian then over a ruling about tax cuts.  Tax cuts and being angry, hypocritical screamers are about the only thing they’re about these days.  Oh, yeah, that reminds me the CPAC–your basic forum for Angry, white, hypocritical screamers--is coming up and let’s pray we don’t have to see any film footage of it or the Trumpsterfire from the Pandemic stricken stet of Floridadia. By the way, Pence turned down an invitation to speak and McConnell didn’t get one per that Guardian link.

After his infamous Cancun junket, Republican Sen. Ted Cruz of Texas was the subject of a prank in the locker room of the Senate gym midweek, Carol Lee and Leigh Ann Caldwell of NBC News reported.

Early birds turning up for a workout Wednesday morning came across color printouts of Cruz in his airport getup, which included a light polo shirt and a mask bearing the Texas flag, according to NBC, who reviewed the materials provided by two sources.

“The rendering featured a manipulated photo of Cruz from his well-documented trip to Mexico, dragging his luggage across an arctic landscape while holding a tropical cocktail garnished with a slice of fruit in his other hand,” Lee and Caldwell wrote.

Ah, gee … same bunch of folks with the worst twitter trolls on the planet getting reemed on sacred ground.  Have they no mercy?  No sense of the sacred?

Speaking of which, I think that I’m going to start picking on Rand Paul more since he’s defintely up there on the most offensive person in the Washington Beltway crowd.  I still can’t get how he could compare child genital mutilation to the procedure to becoming intersex to a transgender Doctor who is candidate for a leadership position for HHS.  Can we just start understanding the gender is a social concept?  And there’s wonderful research on it from indigenous tribes and other places not considered “western”.

There’s a lot to discuss concerning these issues.  Can we start by having a discussion on that gender and sex are not the same thing no matter how hard some folks want to believe they are?  But sheesh, that line of questioning was uncalled for under any circumstances but a serious conversation about the forced gender mutiliation of children–including circumcision–in a hearing on why we let a lot of religions get away with cruel rituals.

Okay, so that’s it from me today. What’s on your reading and blogging list today?

So,  let’s sing one for Rando! or Teddy Boy!  Your choice!