Christmas at the Roosevelt hotel where my parents spent their honeymoon after having a yuletide wedding in Kansas City.

Good Day Sky Dancers and Happy Christmas to those who celebrate!

Usually, I have these wonderful pictures of the Lutcher Bonfires that are lit to greet Père Noël!  They were cancelled this year due to the Covid-19 outbreak.  This has been a holiday season unlike any other in my life time.  There were some normal things up and running even after the Katrina Xmas.  We still have very French traditions down here despite Napoleon selling us out to Thomas Jefferson.  Reveillon–the Christmas Eve Feast– is one of my favorites because, yes, FOOD!

In France, a country where at least 60 percent of the population identifies as Catholic according to Europe Now, even the majority who may be a little irregular in their attendance at Sunday services will often come out for midnight mass. And, as 100 percent of the country’s population are serious foodies, naturally la messe de minuit is followed by a sumptuous meal called le Réveillon, which translates to “the awakening.” Which kind of implies that you’ve fallen asleep during mass – tsk tsk – but still, a luxurious meal of escargots, oysters, roast pheasant, and foie gras followed by bûche de Noël and washed down with Champagne is a pretty nice way to wake up from a long winter’s nap.

In fact, Complete France says that a single Réveillon is not sufficient to make la saison des fêtes sufficiently joyeuse – instead, they celebrate le Réveillon de Noël on Christmas Eve (or rather, early Christmas morning) and on New Year’s Eve they partake in le Réveillon de la Saint Sylvestre. Can’t make it to France this year? That’s ok. Nineteenth-century French immigrants brought this tradition to that French-est of U.S. cities, New Orleans. Visit New Orleans notes that the early, midnight mass-based tradition seemed to have died out by the WWII era, it was revived in the 1990s in a more secular version. 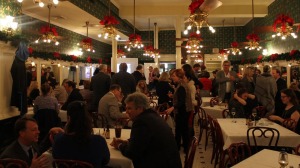 Revillion at Galatoire’s on Bourbon Street.

There was an intentional bombing this morning in Nashville.

The explosion happened in the area of Second Avenue and Broadway near Commerce Street occurred around 6:30 am Friday. Heavy black smoke could be seen rising above the affected area.

MNPD, FBI, and ATF are investigating the explosion of an RV outside 166 2nd Avenue North downtown.

Officers responded to a call of shots fired call on 2nd Avenue at approximately 5:30 a.m. The department’s Hazardous Devices Unit was called to check the RV. As those officers were en route, the vehicle exploded outside an AT&T transmission building. Multiple buildings on 2nd Avenue were damaged, some extensively.

They’ve not released any more information than that as of this writing.  However, this is some interesting commentary.

Media: On the #NashvilleExplosion, @juliettekayyem to @biannagolodryga: "It appears that whoever" is behind this "did not want a mass-casualty event. So then you have to ask, what did they want? Either a building and/or facility, or did they want first responders to respond?" pic.twitter.com/dj7X67IOHc

This looks exactly like the kind’ve Revillion Menu served up by Paul Prudhomme’s stellar students my friends Chefs Mary and Greg Sonnier.Their restaurant is named after their daughter Gabrielle  They do have a great take out menu these days though!!

Here’s a few links to show you how litigious, unsuccessful, and crazy Trumpist law suits can be.  Trump and his cronies seem to be better at getting put in jail  with criminal lawsuits than successful getting what they consider justice mostly because of hurt widdle feefees.

Judge Tosses Out Rep. Nunes’ Lawsuit Against Washington Post  —  A federal judge dismissed a defamation lawsuit against the Washington Post from Rep. Devin Nunes (R-Calif.) on Thursday, the latest development in a string of legal battles waged by Nunes against mainstream media outlets …

The Trump lists of pardons are the most horrifying collection of war criminals and thieves and traitors that I’ve ever seen.   Here’s some links to read on those actions.

Among the dozens of people who received pardons from President Trump this week were several who lied to investigators and obstructed a federal probe into the president’s links to Russia.

Some had personal connections to Trump or his most loyal backers. A handful were Republican lawmakers rewarded for fealty to the president after betraying the public trust. Others abused their authority in more violent ways, killing or injuring unarmed civilians.

Taken together, the rogues’ gallery of criminals receiving clemency this week showcased Trump’s willingness to exert raw political power for his own personal gain, handing out favors to friends at a time when he is seeking GOP support for his flailing bid to reverse his election loss.

In a process White House aides describe as ad hoc, many of the pardon seekers ended up on the president’s radar after conservative activists, television commentators or other friends of Trump made personal appeals on their behalf.

Sen. Brice Wiggins, a prominent Republican member of the Mississippi Senate from Pascagoula, broke ranks with most members of his party in the state last night as he criticized President Donald Trump’s ongoing pardon spree.

Wiggins, who served as an assistant district attorney for seven years and as a youth court prosecutor for one year before joining the Mississippi Senate in 2012, said in a tweet thread yesterday evening that Trump’s pardons “aren’t good.”

“They smack of cronyism and political favors. As such, they erode our faith in the rule of law,” Wiggins, who chairs the powerful Senate Judiciary Division B Committee, wrote in a tweet thread Friday night.

Faris Fadel had just one word to describe the recent pardoning by the Trump administration of four private security contractors convicted of killing Iraqi civilians — including his brother — in a public square 13 years ago: Unfair.

Fadel’s brother, Osama Abbas, had been on his way to work that fateful day. He had just crossed a street into Baghdad’s Nisoor Square to do a money transfer — a last minute change in plans that would cost the 41-year old electrical engineer his life.

At the time, the Blackwater firm had been contracted to provide security for U.S. diplomats in Iraq. It was four years after the 2003 invasion of Iraq that ultimately toppled Saddam Hussein. The four men, military veterans working as contractors for the State Department, opened fire in the crowded traffic circle killing 14 Iraqis, including a child, and wounding over a dozen more.

“Everyone’s sending emails to Jared,” a source familiar with the process said. “If you want to make something happen, go to Jared.”

The source, who requested anonymity due to the sensitivity of the ongoing process, spoke with Yahoo News on Monday, before Trump issued the spate of pardons and commutations. They predicted the coming onslaught of pardons.

“It’s going to be a free-for-all,” the source said.

They went on to claim that Kushner was “keeping score” and tracking the people asking for clemency. “He’ll let you know where you stand,” the source said. “The ones who are going to get pardoned and get to the top of the list are the ones who have representatives, staff or counsel that were loyal to the president.”

The White House did not respond to requests for comment. A second source familiar with the pardons said they “believe technically that pardons and clemency were under Jared Kushner in the White House.”

One pardon recipient was Kushner’s own father, Charles, a real estate developer who was convicted in 2005 on charges related to illegal campaign contributions, tax evasion and witness tampering that stemmed from an extortion plot in which he hired a woman to seduce and blackmail his brother-in-law. Pardons also went to former members of Trump’s presidential campaign who were ensnared in the investigations into his presidential bid, including Paul Manafort, Trump’s erstwhile campaign chairman, and longtime adviser Roger Stone.

Anyway, hope you pass some good times, mes cher amies!  We’ll get through this together!   January 20, 2021 is coming and Kamala’s going to get the work done and Joe’s gonna calm things down for sure!

What’s on your on reading and blogging list today? And, are you binging anything juicy?