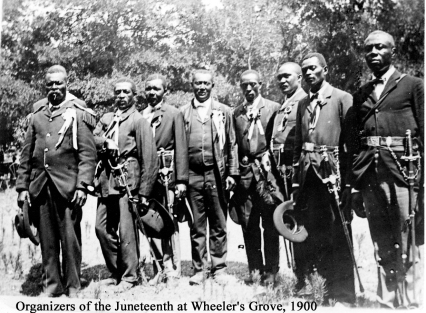 Yes.  This is a regular post here at Sky Dancing!  It’s not something we all just discovered.  I went back into our archives and searched for the Juneteenth tag and discovered that Mona, JJ, BB, and I had all written posts for the occasion.

That link goes to the one I wrote in 2017 and it includes pictures, history, and a link to Black Lives Matter plus a police brutality case in Seattle where police shot and killed a mother of four waving a knife around.  There is also a link to the outrage in the Twin Cities over the acquittal of officers involved with the death of Philando Castille plus bonus links on gerrymandering in Wisconsin and how difficult it is to climb out of poverty.  It’s like reading headlines today with different names and none of the Trump chaos and malfeasance.

This link has some exciting news for a history nerd like me. “An original ‘Juneteenth’ order found in the National Archives. The handwritten document informed the enslaved in Texas they were free on June 19, 1865.”  This is via WAPO.

The National Archives on Thursday located what appears to be an original handwritten “Juneteenth” military order informing thousands of people held in bondage in Texas they were free.

The decree, in the ornate handwriting of a general’s aide, was found in a formal order book stored in the Archives headquarters building in Washington. It is dated June 19, 1865, and signed by Maj. F.W. Emery, on behalf of Union Maj. Gen. Gordon Granger.

“The people of Texas are informed that, in accordance with a proclamation from the Executive of the United States, ‘all slaves are free,’ ” the order reads.

“This involves an absolute equality of personal rights and rights of property between former masters and slaves and the connection heretofore existing between them becomes that between employer and hired labor.”

So, if only we did a better job living up to the promises our country made to every one.  Jamelle Bouie writes this for the NYT: ‘Why Juneteenth Matters. It was black Americans who delivered on Lincoln’s promise of “a new birth of freedom.’

Neither Abraham Lincoln nor the Republican Party freed the slaves. They helped set freedom in motion and eventually codified it into law with the 13th Amendment, but they were not themselves responsible for the end of slavery. They were not the ones who brought about its final destruction.

“Slave resistance,” as the historian Manisha Sinha points out in “The Slave’s Cause: A History of Abolition,” “lay at the heart of the abolition movement.”

“Prominent slave revolts marked the turn toward immediate abolition,” Sinha writes, and “fugitive slaves united all factions of the movement and led the abolitionists to justify revolutionary resistance to slavery.”

Juneteenth this year will have a different feel.  This is from the AP:

Juneteenth celebrations will be marked with marches and civil disobedience, and like the nationwide protests that followed the deaths of black men and women at the hands of white police they are likely to be remarkably more multiracial this year. https://t.co/FJvzXYgXRW

For many white Americans, recent protests over police brutality have driven their awareness of Juneteenth’s significance.

“This is one of the first times since the ’60s, where the global demand, the intergenerational demand, the multiracial demand is for systemic change,” said Cornell University professor Noliwe Rooks, a segregation expert. “There is some understanding and acknowledgment at this point that there’s something in the DNA of the country that has to be undone.”

Friday’s celebrations will be marked from coast to coast with marches and demonstrations of civil disobedience, along with expressions of black joy in spite of an especially traumatic time for the nation. And like the nationwide protests that followed the police involved deaths of black men and women in Minnesota, Kentucky and Georgia, Juneteenth celebrations are likely to be remarkably more multiracial.

After weeks of nonstop protests, #Juneteenth in DC will be a day of defiance, with activist groups calling for walkouts, strikes, highway blockades & lively celebrations that could shut down much of downtown as #DC again expects thousands of protesters. https://t.co/uDh1VLqeju

This year, invigorated by weeks of protests that began after the police killing of George Floyd, more than 20 rallies, marches and events are scheduled for Friday in the District — with hundreds more in at least 45 states, according to the Movement for Black Lives.

Starting about 8 a.m., protesters will gather at symbolic landmarks, including the U.S. Education Department, the Lincoln Memorial, the National Museum of African American History and Culture, Freedom Plaza, the African American Civil War Memorial, Meridian Hill Park (also known as Malcolm X Park) and the White House. Other rallies, vigils and demonstrations in the Northern Virginia and Maryland suburbs also are planned.

Amy Walter / The Cook Political Report:  New 2020 Electoral College Ratings  —  With just under five months until the election, President Trump is a severe underdog for re-election.  Polls show that voters do not trust him to handle the two most pressing issues of the day — the coronavirus pandemic and race relations — which has helped drive his job approval to 41 percent.

Cat Zakrzewski / Washington Post:  Twitter labels Trump video tweet as manipulated media, continuing its crackdown on misinformation  —  The label marks the fourth time Twitter has added labels to the president’s tweets.  —  Twitter on Thursday evening took the rare step of appending a warning label to one of President Trump’s tweets …

BREAKING: Louisville's mayor announced termination proceedings against Brett Hankison, one of the police officers involved in the killing of #BreonnaTaylor.

No charges have yet been filed. She was killed 98 days ago. pic.twitter.com/zWeLADrZaS

So, the first reference I found to our Juneteenth blog celebration was from 2010 and Wonk wrote it.  She’s from Texas so she has a lot more familiarity with the holiday than most of us did but yet, we all found out about it way before Donald Trump and way before the sudden interest of white people in its celebration.  Today, I think about the number of black Americans dying at the hands of police, black women dying from  inadequate pregnancy care, black elders with comorbidities that should not exist in a country as rich as ours dying from COVID 19.

I think about all the systemic hurdles our country has placed in front of the black community. I think about the hope of the Emancipation and the Dream of MLK and the basic justice and equality built into the US Constitution that never quite becomes true for all of us at the same time.

Perhaps, this is a Juneteenth that serves as a new Emancipation watermark. However, just looking back on the last 10 years I realize that it’s going to take a hell of a lot more legislative action to make any of those Promises and Dreams a reality.  Which brings me to Mitch McConnells’ reign of terror in the Senate. We could’ve done a lot more without him.

At a time when Confederate symbols are being removed from public places it’s time to think about what we can do to get rid of the NeoConferates in the Senate like Mitch (and Lindsey too). He’s taken cover behind Trumpist chaos to block all legislation except those huge horrid tax cuts and a few minor others.    He has worked tirelessly just to put unqualified judges with NeoConfederate ideology on federal benches in life time appointments.  None of the hard work of getting laws passed is going to get through him if he can help it.

We need to get rid of these old NeoConfederates in the Senate this year or it’s going to be another log slog down the road to freedom and justice.  The struggle continues.