Thursday Reads: Ghost Cities In the Time of Coronavirus 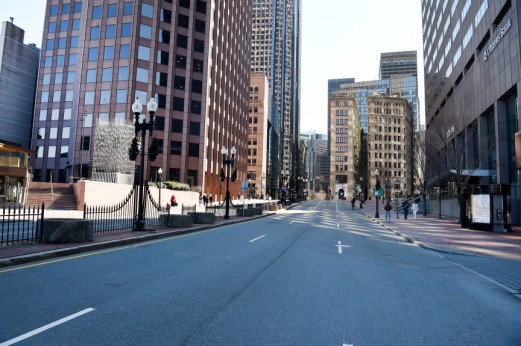 Congress Street near Boston City Hall, typically teaming with tourists and vehicle traffic at 2pm on a Sunday is empty due to the coronvirus, March 16, 2020 (Jim Michaud, MediaNews Group/Boston Herald)

We truly are living in a whole new world now, and we may never return to the old one.

Gideon Litchfield at MIT Technology Review, March 17, 2020: We’re not going back to normal.

To stop coronavirus we will need to radically change almost everything we do: how we work, exercise, socialize, shop, manage our health, educate our kids, take care of family members.

We all want things to go back to normal quickly. But what most of us have probably not yet realized—yet will soon—is that things won’t go back to normal after a few weeks, or even a few months. Some things never will. 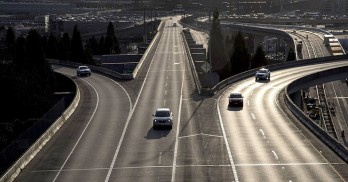 It’s now widely agreed (even by Britain, finally) that every country needs to “flatten the curve”: impose social distancing to slow the spread of the virus so that the number of people sick at once doesn’t cause the health-care system to collapse, as it is threatening to do in Italy right now. That means the pandemic needs to last, at a low level, until either enough people have had Covid-19 to leave most immune (assuming immunity lasts for years, which we don’t know) or there’s a vaccine.

How long would that take, and how draconian do social restrictions need to be? Yesterday President Donald Trump, announcing new guidelines such as a 10-person limit on gatherings, said that “with several weeks of focused action, we can turn the corner and turn it quickly.” In China, six weeks of lockdown are beginning to ease now that new cases have fallen to a trickle.

But it won’t end there. As long as someone in the world has the virus, breakouts can and will keep recurring without stringent controls to contain them. In a report yesterday (pdf), researchers at Imperial College London proposed a way of doing this: impose more extreme social distancing measures every time admissions to intensive care units (ICUs) start to spike, and relax them each time admissions fall. Here’s how that looks in a graph.

The orange line is ICU admissions. Each time they rise above a threshold—say, 100 per week—the country would close all schools and most universities and adopt social distancing. When they drop below 50, those measures would be lifted, but people with symptoms or whose family members have symptoms would still be confined at home.

What counts as “social distancing”? The researchers define it as “All households reduce contact outside household, school or workplace by 75%.” That doesn’t mean you get to go out with your friends once a week instead of four times. It means everyone does everything they can to minimize social contact, and overall, the number of contacts falls by 75%.

Under this model, the researchers conclude, social distancing and school closures would need to be in force some two-thirds of the time—roughly two months on and one month off—until a vaccine is available, which will take at least 18 months (if it works at all). They note that the results are “qualitatively similar for the US.”

I strongly recommend reading the rest at the link above. Like many other publications, Technology Review has made their coronavirus coverage free to everyone.

Another excellent source of information about the coronavirus can be found at Tulane University School of Health and Tropical Medicine, which is publishing a daily newsletter with lists of articles and up-to-date numbers of Covid-19 cases around the world.

We’ve all seen photos of young people partying down in Florida for spring break. They’ve been led to believe that they aren’t vulnerable to Covid-19, but that’s not true.

American adults of all ages — not just those in their 70s, 80s and 90s — are being seriously sickened by the coronavirus, according to a report on nearly 2,500 of the first recorded cases in the United States.

The report, issued Wednesday by the Centers for Disease Control and Prevention, found that — as in other countries — the oldest patients had the greatest likelihood of dying and of being hospitalized. But of the 508 patients known to have been hospitalized, 38 percent were notably younger — between 20 and 54. And nearly half of the 121 patients who were admitted to intensive care units were adults under 65, the C.D.C. reported.

“I think everyone should be paying attention to this,” said Stephen S. Morse, a professor of epidemiology at Columbia University’s Mailman School of Public Health. “It’s not just going to be the elderly. There will be people age 20 and up. They do have to be careful, even if they think that they’re young and healthy.”

The findings served to underscore an appeal issued Wednesday at a White House briefing by Dr. Deborah Birx, a physician and State Department official who is a leader of the administration’s coronavirus task force. Citing similar reports of young adults in Italy and in France being hospitalized and needing intensive care, Dr. Birx implored the millennial generation to stop socializing in groups and to take care to protect themselves and others.

“You have the potential then to spread it to someone who does have a condition that none of us knew about, and cause them to have a disastrous outcome,” Dr. Birx said, addressing young people.

In the C.D.C. report, 20 percent of the hospitalized patients and 12 percent of the intensive care patients were between the ages of 20 and 44, basically spanning the millennial generation.

See also this piece at The New York Times: A Deadly Coronavirus Mix in Florida: An Aging Population and Lots of Young Visitors.

Young people–at least the ones in Florida right now–don’t seem to be taking this seriously.

CBS’s interviews with spring breakers in Miami who refuse to stop partying despite a pandemic are like deleted scenes from Idiocracy pic.twitter.com/mnNOJ5MkZ4

Florida Gov. Ron DeSantis refused to issue an order to close the state’s beaches, despite fears regarding the spread of the coronavirus.

He instead signed an order that would limit parties on beaches to 10 people per group and force any businesses authorized to sell liquor to reduce occupancy by half, DeSantis told reporters Tuesday. The governor said that local governments can make their own decisions but that his order would follow the latest guidance issued by the Centers for Disease Control and Prevention.

DeSantis is a Republican, of course.

Why is Covid-19 so contagious and difficult to treat?

The problem is that the coronavirus was transmitted to humans from animals and therefore we have no natural immunity to the disease. David Quammen is a science writer wrote a book, Spillover, about  these animal-to-human infections–known as zoonotic diseases–was in 2012. From the NYT review by Dwight Garner:

In his powerful and discomfiting new book, “Spillover: Animal Infections and the Next Human Pandemic,” the science writer David Quammen cites a dismal word we’ll be getting used to in the coming decades, whether we like it or not: zoonosis. 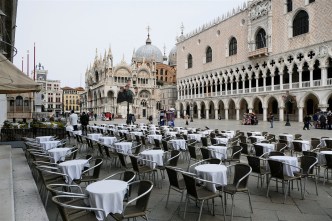 A zoonosis is an animal infection that, through a simple twist of fate, becomes transmissible to humans. Maybe that twist is a needle prick, or contact with an exotic animal or hiking downwind of the wrong farm.

“It’s a mildly technical term,” he admits, but probably not for long. “It’s a word of the future, destined for heavy use in the 21st In his powerful and discomfiting new book, “Spillover: Animal Infections and the Next Human Pandemic,” the science writer David Quammen cites a dismal word we’ll be getting used to in the coming decades, whether we like it or not: zoonosis….

A couple in Barcelona, Spain, embrace in Catalunya Square on March 15.David RamosGetty I mages

AIDS, he adds, that destroyer of 30 million people, is of zoonotic origin.

In “Spillover” Mr. Quammen investigates many of these diseases, some more than others. He describes the baffled horror of initial outbreaks and then tracks calmly backward. He talks to virologists, doctors, field biologists and survivors about how the animal-to-human infection came to pass. He hopscotches the globe like a journalistic Jason Bourne. Often there aren’t doctors left to be interviewed. The medical personnel who first came into contact with sick patients are frequently dead.

Here’s an article by Quammen in from the January 28, 2020 New York Times: We Made the Coronavirus Epidemic. It may have started with a bat in a cave, but human activity set it loose.

The latest scary new virus that has captured the world’s horrified attention, caused a lockdown of 56 million people in China, disrupted travel plans around the globe and sparked a run on medical masks from Wuhan, Hubei Province, to Bryan, Texas, is known provisionally as “nCoV-2019.” It’s a clunky moniker for a lurid threat.

The name, picked by the team of Chinese scientists who isolated and identified the virus, is short for “novel coronavirus of 2019.” It reflects the fact that the virus was first recognized to have infected humans late last year — in a seafood and live-animal market in Wuhan — and that it belongs to the coronavirus family, a notorious group. The SARS epidemic of 2002-3, which infected 8,098 people worldwide, killing 774 of them, was caused by a coronavirus, and so was the MERS outbreak that began on the Arabian Peninsula in 2012 and still lingers (2,494 people infected and 858 deaths as of November). 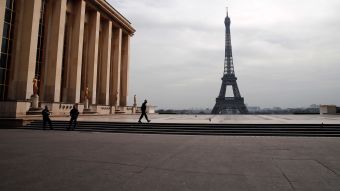 Police officers patrol the empty Trocadero plaza next to the Eiffel Tower in Paris on March 17, 2020, Francois Mori AP

Despite the new virus’s name, though, and as the people who christened it well know, nCoV-2019 isn’t as novel as you might think.

Something very much like it was found several years ago in a cave in Yunnan, a province roughly a thousand miles southwest of Wuhan, by a team of perspicacious researchers, who noted its existence with concern. The fast spread of nCoV-2019 — more than 4,500 confirmed cases, including at least 106 deaths, as of Tuesday morning, and the figures will have risen by the time you read this — is startling but not unforeseeable. That the virus emerged from a nonhuman animal, probably a bat, and possibly after passing through another creature, may seem spooky, yet it is utterly unsurprising to scientists who study these things.

Three interviews with David Quammen to check out:

Orion Magazine, March 17, 2020: Why David Quammen Is Not Surprised.

An audio interview with Quammen at Scientific American, March 18, 2020: David Quammen: How Animal Infections Spill Over to Humans.

One more article about zoonotic diseases from Scientific American, March 18, 2020: Destroyed Habitat Creates the Perfect Conditions for Coronavirus to Emerge.

Those are my recommended reads (and one listen) for today. What stories have you been following?

46 Comments on “Thursday Reads: Ghost Cities In the Time of Coronavirus”