← Lazy Caturday Reads: Congress Must Stop The “Cover-Up General” Bill Barr
Thursday Reads: How Many Pages Are In the Mysterious Mueller Report? The Latest from Crazy Town → 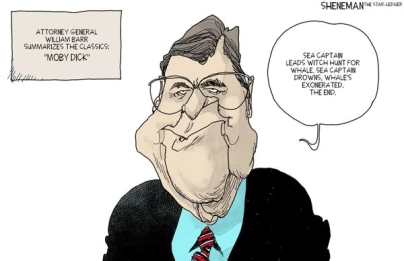 Can we just find a good way to tell all those Republican Cavemen to stop their crusade against the rest of us?  And then, can we ask them to send their Child of Perpetual Grievance, Greed and Ignorance back to the nursery for a forever nap?  I’m down with giving a Mouse a cookie, but what happens when you give a toddler a microphone?  From The Hill:  “Trump says Great Lakes have ‘record deepness’

President Trump said the Great Lakes have “record deepness” during an unusual moment in his boisterous rally Thursday night in Grand Rapids, Mich.

Trump often likes to use hyperbole to describe the places he visits, and in this case it led him to make a statement in the Great Lakes State that left some people scratching their heads.

While the Great Lakes are big and many would describe them as beautiful, they are not among the deepest lakes in the United States, let alone the world.

The deepest lake in the country is Crater Lake, a volcanic crater in southern Oregon with the deepest measured depth of 1,949 feet, according to Geology.com.

Lake Superior is the Great Lake with the largest surface area in the U.S. at 31,700 miles. Its maximum depth is 1,332 feet, but it doesn’t make the record books.

Trump’s comments were getting some chuckles on Twitter the morning after.

A parody Twitter account with the name “Lake Superior” tweeted: “I hate to admit this, but … no, not record deepness. Not in the world or in the United States.”

Trump just flip-flopped on his own admin's proposed budget again. He said "I'm going to get, in honor of my friends, full funding of $300 million for the Great Lakes Restoration Initiative." His budget had proposed $30 million. https://t.co/51SZR4VSn2

This week has pulled out all the stops to demonstrate just how miserable the next two years of relentless campaigning and rallying will be for us all.  I am going to need elephant tranquilizers just to sleep at night at this rate.  Susan Glasser–writing for The New Yorker–characterizes him thusly “Our President of the Perpetual Grievance”.  That’s pretty much what his cult is like too. They’re a bunch of whiny ass white titty babies who want it all and want it now.

What’s been remarkable, this week, is how much Trump triumphant has sounded like Trump at every other point in his Presidency: angry and victimized; undisciplined and often incoherent; predictable in his unpredictability; vain and insecure; prone to lies, exaggeration, and to undercutting even those who seek to serve him. Sure, he appears relieved, but the Barr letter, with its welcome news for Trump, did not come with magic fairy dust that could suddenly transform the seventy-two-year-old President into someone else entirely. The new Time cover shows Trump under an umbrella, smiling in the rain, with the headline “The Trump Reboot,” but that misses the point. There is no reboot, no Trump 2.0—nor will there be. Even without the existential peril to his Presidency that Mueller posed, Trump is still Trump, the same as he ever was.

Before his rally on Thursday, Trump had made eight public appearances after Barr released his summary of Mueller’s findings, most of them short responses to shouted questions from reporters and one long interview with his favorite Fox News host, Sean Hannity. I went back and listened to all of them. There was no new Trump, no moving on. What was striking was how little celebration there was from the President, although he did talk a few times about the “beautiful” outcome. The same was true for Trump’s always-active Twitter feed, which combined the usual fevered mix of insta-punditry, peremptory demands(The Organization of the Petroleum Exporting Countries must “increase the flow of Oil… Thank you!”), and score-settling (“the Fake News Media is going Crazy!”) that has become familiar, if no more Presidential, by now. The main news of Trump’s post-Mueller week, in fact, was the undercutting of his own party, another Trump trademark, as his Administration decided to support a court ruling that would eliminate the Affordable Care Act. Trump declared a new slogan for Republicans as “the Party of great health care,” although G.O.P. leaders on Capitol Hill view the issue as a political loser that cost the Party control of the House last fall.

Trump appears to have been freed from the fear of impeachment and removal from office, but he remains the public figure he has always been: a weird combination of perpetual victim and perpetual bully, whose one constant is to remain on the attack. In case the President’s plan wasn’t already abundantly clear, on Thursday morning he tweeted out a Fox commentary segment: “Now is the time for President Trump to Counter Punch.” And counterpunch he did. The closest thing to an overture to Democrats in his rally on Thursday night was when he called on the Party “to decide whether they will continue defrauding the public with this ridiculous bullshit . . . or whether they will apologize to the American people” and work with Trump on priorities like fixing “broken trade deals” and building a wall on the southern border. As political overtures go, it wasn’t much of one. 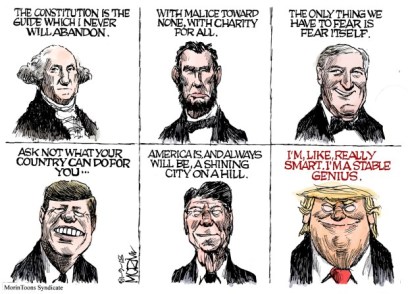 Trump also insisted Thursday evening at a rally in Michigan that he “knows a lot about wind. If it doesn’t blow, you can forget about television for that night,” he said.

Wind energy can be stored in a variety of ways, including in something called batteries. Most power grids combine energy provided by different sources — as the Trump administration’s own Energy Department explains on its website for anyone who cares to look. “The wind does not always blow and the sun doesn’t always shine,” the site helpfully notes. Yet the power grid “can accommodate large penetrations of variable renewable power without sacrificing reliability.”

Trump shared his energy insights during a rambling, often repeated point that he is the toughest president ever on Russia. That apparently has resulted in a boost in U.S. fossil fuel use and sales, he said in the Wednesday phone interview with Hannity.

and his little wiener

Because, damn the man brings out the pre-schooler in me some times.  It’s got more verses but I’ll spare you.

TRUMP: "If Hillary got in… you'd be doing wind. Windmills. Weeeee. And if it doesn't blow, you can forget about television for that night. 'Darling, I want to watch television.' 'I'm sorry! The wind isn't blowing.' I know a lot about wind." pic.twitter.com/tGsUIoUmUQ

From NPR: “Nominee For No. 3 At Justice Department Withdraws After Backlash From GOP Senators.”

Two sources told NPR that the attorney general got into a “shouting match” with Utah Republican Sen. Mike Lee, a key figure in opposing Liu’s bid. A spokeswoman for Barr declined comment on the heated conversation with a lawmaker from his own political party. For his part, Barr issued a statement filled with praise for Liu and insisting, “We will all benefit from her universally-regarded expertise and dedication to public service” in her role as an adviser to him.

Four lawyers familiar with the matter said the stumbling block for Liu was a broader concern about her conservatism — specifically, her stance on women’s reproductive rights. Interest groups had begun drafting letters to senators about their fears that Liu would not support restrictions on abortion. Another key factor: Earlier in her career, Liu had an affiliation with the National Association of Women Lawyers, which sent a letter opposing the nomination of Justice Samuel Alito to the Supreme Court.

Philip Alito, a son of the justice, works for the antitrust subcommittee in the Senate, a subcommittee that is chaired by Lee.

And of course, Trumpy Dumpkins and his little playmates were all for equal wage for equal work for women right? From ABC News “House Democrats pass equal pay for equal work act. Women earn just 80 cents to the dollar a man makes for the same work.”

Ten years after President Barack Obama signed the Lily Ledbetter Fair Pay Act into law, House Democrats voted Wednesday to approve the Paycheck Fairness Act, delivering one of the cornerstone pieces of their “For the People” agenda to the Republican-led Senate.

The vote passed 242-187, primarily down partisan lines, as the full Democratic caucus voted in favor of the bill and seven Republicans crossed the aisle to support it.

Can’t wait until the Senate passes it and the stable genius-who thinks he’s got the women’s votes–signs it!  Lies Lies and more lies!  Every Trump rally and interview is Lyingpalooza.

How can you be sure Trump lied to his low-info #MAGA supporters last night?

Anyway, you can read and listen to more at the links. Frankly, my old heart and brain can’t take any more..  What’s on your reading and blogging list today?