← Sunday Reads: How long must we wait?
Friday Reads: Sociopaths of a feather Gaslight together →

I’m getting a slow start today because I’ve been having stabbing pain in my right eye from falling asleep with my face in the pillow. I don’t know why this happens. It might be because I have surgically inserted lenses in my eyes. Anyway, that’s my excuse for being so late.

You’ve probably seen this by now, but when I read it last night everything about fell into place for me. Brett Kavanaugh is the culmination of the “vast right wing conspiracy” that Hillary Clinton warned us about so long ago.

NBC News: I knew Brett Kavanaugh during his years as a Republican operative. Don’t let him sit on the Supreme Court, by David Brock

Twenty years ago, when I was a conservative movement stalwart, I got to know Brett Kavanaugh both professionally and personally.

Brett actually makes a cameo appearance in my memoir of my time in the GOP, “Blinded By The Right.” I describe him at a party full of zealous young conservatives gathered to watch President Bill Clinton’s 1998 State of the Union address — just weeks after the story of his affair with a White House intern had broken. When the TV camera panned to Hillary Clinton, I saw Brett — at the time a key lieutenant of Ken Starr, the independent counsel investigating various Clinton scandals — mouth the word “bitch.” 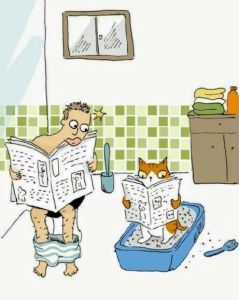 But there’s a lot more to know about Kavanaugh than just his Pavlovian response to Hillary’s image. Brett and I were part of a close circle of cold, cynical and ambitious hard-right operatives being groomed by GOP elders for much bigger roles in politics, government and media.

Brock details how Kavanaugh became the “designated leaker” in the Starr investigation and how used his position to weaponize right wing conspiracy theories.

Another compatriot was George Conway (now Kellyanne’s husband), who led a secretive group of right-wing lawyers — we called them “the elves” — who worked behind the scenes directing the litigation team of Paula Jones, who had sued Clinton for sexual harassment. I knew then that information was flowing quietly from the Jones team via Conway to Starr’s office — and also that Conway’s go-to man was none other than Brett Kavanaugh.

That critical flow of inside information allowed Starr, in effect, to set a perjury trap for Clinton, laying the foundation for a crazed national political crisis and an unjust impeachment over a consensual affair.

Please read the rest if you haven’t already.

The New York Times Editorial Board weighs in on Kavanaugh: Confirmed: Brett Kavanaugh Can’t Be Trusted. A perfect nominee for a president with no clear relation to the truth.

In a more virtuous world, Judge Brett Kavanaugh would be deeply embarrassed by the manner in which he has arrived at the doorstep of a lifetime appointment to the Supreme Court.

He was nominated by a president who undermines daily the nation’s democratic order and mocks the constitutional values that Judge Kavanaugh purports to hold dear.

Now he’s being rammed through his confirmation process with an unprecedented degree of secrecy and partisan maneuvering by Republican senators who, despite their overflowing praise for his legal acumen and sterling credentials, appear terrified for the American people to find out much of anything about him beyond his penchant for coaching girls’ basketball.

Perhaps most concerning, Judge Kavanaugh seems to have trouble remembering certain important facts about his years of service to Republican administrations. More than once this week, he testified in a way that appeared to directly contradict evidence in the record.

Read numerous examples of Kavanaugh’s mendacity at the link.

Kavanaugh received and used stolen Democratic emails when he worked in the Bush White House, and he’s not the least bit sorry. The Washington Post: Leahy says Kavanaugh was ‘not truthful’ about Democratic documents.

Sen. Patrick J. Leahy (D-Vt.) said Friday that Supreme Court nominee Brett Kavanaugh was “not truthful” when he denied knowing that he had received documents that Leahy said had been “stolen” from him and other Democrats.

Leahy said that emails disclosed during Kavanaugh’s nomination hearing this week buttress his case that Kavanaugh knew, or should have known, that he had received documents that Republican staffers took from a computer jointly shared with Democrats.

“There were numerous emails sent to him that made it very clear this was stolen information, including a draft letter from me,” Leahy said in an interview….

Leahy’s charge stems from an infamous episode between 2001 and 2003 when a Republican counsel on the Senate Judiciary Committee, Manuel Miranda, learned that Democrats on the panel had put documents on a computer server shared with Republicans. Miranda said in an interview that he read them to learn about the party’s strategy on judicial nominations coming before the committee.

At the time, Kavanaugh was associate counsel in the White House and was responsible for helping to vet judicial nominees who would appear before the Judiciary Committee.

As I’m sure you’ve heard, Kavanaugh lied about this affair in previous confirmation hearings.

Mother Jones: Five Times Brett Kavanaugh Appears to Have Lied to Congress While Under Oath.

Supreme Court nominee Brett Kavanaugh has made declarations under oath during his current and past confirmation hearings that are contradicted by documents from his time as a counsel to the president and staff secretary in the George W. Bush White House. Newly released documents have undermined Kavanaugh’s declarations to the Senate Judiciary Committee, contradictions that are drawing close scrutiny from many Democrats. Kavanaugh has denied making any misleading or false statements.

His role in accessing stolen documents: In 2002, a GOP aide on the Senate Judiciary Committee, Manuel Miranda, stole thousands of documents belonging to the committee’s Democratic staff. At the time, Kavanaugh was a White House lawyer working on judicial nominations, which included working alongside Miranda. In 2003, President Bush nominated Kavanaugh to his current position on the DC Circuit Court of Appeals and his confirmation hearing was held in 2004—though he was not confirmed until two years later. During his 2004 hearing, Kavanaugh denied ever receiving any of the documents Miranda stole. Asked if he “ever come across memos from internal files of any Democratic members given to you or provided to you in any way?” he replied, “No.” In 2006, also under oath, he again denied ever receiving stolen documents….

Warrantless wiretapping: At a 2006 confirmation hearing, Kavanaugh told Sen. Patrick Leahy (D-Vt.) that he knew nothing of the NSA’s warrantless wiretapping program, launched under President George W. Bush, until the New York Times revealed it publicly in 2005. Kavanaugh insisted he’d heard “nothing at all” about the program before that, even though he was a senior administration aide. But a September 17, 2001 email provided to the New York Times this week shows that Kavanaugh was involved in at least initial discussions about the widespread surveillance of phones that characterized the NSA program….

Torture: During the same 2006 confirmation hearing, Kavanaugh told Sen. Dick Durbin (D-Ill.) that he “was not involved” in legal questions related to the detention of so-called enemy combatants. But Durbin said Thursday that records show that there are at least three recorded examples of Kavanaugh participating in discussions of Bush administration detainee policy. Kavanaugh stood by his prior answer.

Please read the rest of the examples and explanations at Mother Jones.

Lisa Graves at Slate: I Wrote Some of the Stolen Memos That Brett Kavanaugh Lied to the Senate About. He should be impeached, not elevated.

Just Security: Judge Kavanaugh’s Testimony on His Constitutional View of Presidential Immunity is Misleading—and It Also Clinches the Case for Recusal.

The Daily Beast: We Found the ‘Plaid Shirt Guy’ Who Trolled Trump’s Rally With Hilarious Faces.

The Atlantic: ‘The Separation Was So Long. My Son Has Changed So Much.’U.S. border guards took a 6-year-old Honduran boy from his mother, and ultimately returned a deeply traumatized child.

New York Review of Books: ‘Bless Nixon for Those Tapes’: An Interview with John Dean.

What stories have you been following?