← Live Blog: Hillary Victory Dance!
Breaking News: The AP makes it Official and Hillary is the ONE! →

Tuesday Reads: Wrap it up and put a Bow on it 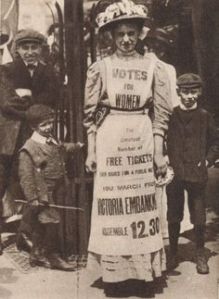 On August 26th, 1920, women finally achieved the right to vote by Constitutional Amendment in the United States.   Three-quarters of the states finally ratified the 19th Amendment. My maternal grandmother was coming up on her 4oth birthday when this happened.  Every time I vote–and I vote for everything under the sun–I vote for my grandmothers who could not vote until they were well into middle age and my great grandmothers before them who either never voted or had to wait until they were well on in age.

It is also no small  detail that it took nearly 100 years to get a woman as a Candidate for President from the major parties.  But, the deed is done.   It has not been for lack of trying or hoping on the part of many people.  It’s been a long time coming but today is a day for herstory.

Clinton, now the presumptive Democratic nominee, faces a general election race against Republican Donald Trump that will be seen as a referendum on women in politics, gendered stereotypes about power, and women as a voting bloc. Polls show dramatic splits based on gender, with men going for Trump and women favoring Clinton — even as Clinton has struggled with winning over young female voters in her primary run against Bernie Sanders.

“I know we have never done this before. We’ve never have had a woman president,” she said Saturday night in Fresno, California. “That is why I want you to understand, that I have spent eight year in the Senate on the Armed Services Committee, four years as secretary of state. I have spent a lot of hours in the Situation Room working to solve some of the hardest problems we face. And I know how hard this job is and how much humility you need to have and how you should actually listen to people who have good ideas.”

Clinton’s close primary loss to Barack Obama in 2008 was itself historic, setting up the nomination of Sarah Palin as a running mate on the Republican side, and the sense that a woman in the White House was an eventuality.

Eight years later, Clinton has a shot at making that sense a reality.

“This is the most historic moment for women in politics that we’ve seen in contemporary times,”said Jennifer Lawless, co-author of “Women on the Run” and director of the Women & Politics Institute at American University. “If you look back to the ’18 million cracks’ speech, that seemed monumental and that was a loss. Symbolically it’s a big deal, and substantively, it means that the country is willing to move forward with a female president.”

Among Clinton’s endorsements is one today from our nation’s first woman Speaker of the House.  Nancy Pelosi announced her support this

“I’m a voter in California and I have voted for Hillary Clinton for president of the United States and proud to endorse her for that position,” the Democratic superdelegate said, though adding “it’s not over until it’s over.”

Senator Sanders continue to provide some bizarre logic on why Super Delegates should select him instead of the Clinton who has won majorities in every way possible on her way to the Democratic nomination.   Sanders voters are trying to make a last stand in California.  The announcement of Clinton’s passing the magic number appears to have made them even more angry and delusional.  Jonathan Chait has made a laundry list of all Sander’s “crazy process arguments” which still seem to be flying from the mouths of the campaign.

The system isn’t rigged. Clinton is going to win the nomination because she has won far more votes. She currently leads with 55 percent of the total vote to 43 percent. That’s fairly close for a primary, but it’s not Bush-versus-Gore close. It’s not even Bush-versus-Dukakis close (the 1988 election, widely seen as a landslide, was settled by less than 8 percent). Clinton’s lead in pledged delegates is proportionally smaller than her lead in total votes because Sanders has benefited from low-turnout caucuses. Yet Sanders has enjoyed astonishing success at framing his narrative of the primary as a contest that, in some form or fashion, has been stolen from its rightful winner. His version of events has bled into the popular culture and fueled disillusionment among his supporters.

Sanders initially discounted Clinton’s success as the product of “conservative” states, which is a technically accurate depiction of the states as a whole, but not of the heavily African-American Democratic voters in them who supported Clinton. As Sanders has continued to fail to dent Clinton’s enormous lead in votes and delegates, his campaign has devised a series of increasingly absurd formulations to defend its theme that Sanders, not Clinton, is the authentic choice of the people.

Clinton plans to call Sanders tonight.  I’m as interested in that phone call as the one the President made to the man on Sunday.  Will any amount of logic reach the ears of this pathetic old man?

Our campaigns are certainly talking,” Clinton said in an interview with MSNBC’s Rachel Maddow that aired Monday. “I’ll be reaching out after tomorrow night because I obviously want to unite the party.”

“We have so much more in common and we face a serious threat from Donald Trump,” she continued. “There’s no doubt that Donald Trump is the threat … that is going to unite the Democratic Party.”

The interview was taped prior to The Associated Press reporting that Clinton had secured the 2,383 delegates needed to clinch the Democratic nomination for president.

The AP’s tally comes ahead of primary contests in six states on Tuesday.

“According to the news, we are on the brink of a historic, historic, unprecedented moment, but we still have work to do,” Clinton said at the start of a Monday rally in Long Beach, Calif., shortly after the AP made the call.

In a response, the Sanders campaign said it was wrong to count the superdelegates — party leaders free to support either candidate — before they actually vote at the Democratic National Convention in July.

“It is unfortunate that the media, in a rush to judgment, are ignoring the Democratic National Committee’s clear statement that it is wrong to count the votes of superdelegates before they actually vote at the convention this summer,” the campaign said.

During the Maddow interview, Clinton called Sanders’s quest to sway superdelegates “perplexing” and said her campaign is not lobbying them.

Tonight, we’ll live blog the returns and speeches.  The press may have taken the some of the steam out of the day by announcing her win early but we will be there until the last vote is counted.

Also, make sure all your friends and relatives that can vote today go out and vote.  We want this to be a huge statement to both Trump and Sanders and their supporters.

41 Comments on “Tuesday Reads: Wrap it up and put a Bow on it”