← Friday Reads: Air BnB wrecking neighborhoods all over the country including mine
Wednesday Reads: Learning Life’s Lessons in a Pool Room →

It has been close to 90 degrees here for the past several days, and it’s technically still spring. I’m beginning to wonder if we are going to have a summer from hell as a follow-up to the worst winter in the half-century I’ve lived in Boston.

In addition to the unusually hot weather, the pollen is so bad that every morning when I wake up it takes a few hours for my scratchy, watery eyes to clear up enough for me to read comfortably.

I’m on a regimen of Flonase, Allegra, and Mucinex; but I still feel stuffed up most of the time. Sometimes I feel itchy and even dizzy and nauseated; and I think it’s from allergies. The itchy skin would be unbearable without the Allegra.

Is anyone else noticing worse-than-usual allergies this year? Last year’s spring allergy season was very bad; this year is far worse. Anyone who actually claims to believe that there isn’t something dramatic happening with our weather is either deluded or lying. I wonder if we will manage to do something about climate change before it’s too late.

What about all that awful weather down in Texas?

Here’s a story from the Texas Tribune, via KXON: Climate change, a factor in Texas floods, largely ignored.

“We have observed an increase of heavy rain events, at least in the South-Central United States, including Texas,” said Nielsen-Gammon, who was appointed by former Gov. George W. Bush in 2000. “And it’s consistent with what we would expect from climate change.”

But the state’s Republican leaders are deeply skeptical of the scientific consensus that human activity is changing the climate, with top environmental regulators in Texas questioning whether the planet is warming at all. And attempts by Democratic lawmakers during the 2015 legislative session to discuss the issue have come up short.

“In part, it’s ideologically driven and intellectually lazy,” said state Rep. Rafael Anchia, D-Dallas, who earlier this year invited national security experts to the state Capitol to testify at a hearing on the risks of climate change. “My question is: What are people scared of? Are they scared of the truth?”

Asked about the role of climate change in the floods, U.S. Sen. Ted Cruz declined to weigh in Wednesday. “At a time of tragedy, I think it’s wrong to try to politicize a natural disaster,” the Republican presidential candidate said during a news conference in San Marcos after surveying damage.

How does discussing scientific research on climate constitute “politicizing a natural disaster?”

Extreme weather events, and more of them, are among the most agreed-upon effects of global warming in all the scientific literature on the subject, said Nielsen-Gammon, who is also a professor at Texas A&M University. Part of the explanation is that ocean temperatures are rising, bringing more moist air into the state that can create storm systems. In the past century, precipitation in Texas is up 7 to 10 percent, and the frequency of two-day heavy rainfall spells has nearly doubled.

The scientific consensus is much stronger on this point than on whether climate change can directly cause droughts. Nielsen-Gammon’s own research has shown that warmer temperatures due to global warming did make the drought in Texas measurably worse than it otherwise would have been.

But for the last several years, legislation calling for climate-change studies has not succeeded in the Capitol. 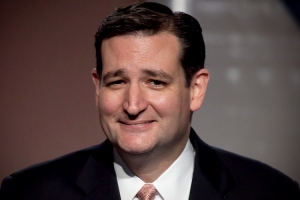 The Republican presidential contender has held two press conferences over the past two days to address the flooding and the government’s response. At each one, he was asked about the impact of climate change on natural disasters like the Texas flooding, and at each one, he dodged the question….

“I think the focus now is on caring for those who have lost their lives and lost their homes,” he said.

At least 31 people have died in Mexico, Texas and Oklahoma from the storm since this weekend, while another 11 remain missing in Texas. Cruz promised to do all he could to ensure that Texans get access to the resources they need during the recovery.

During a press conference on the deadly flooding in Texas, Cruz said, “The federal government’s role, once the Governor declares a disaster area and makes a request, I am confident that the Texas congressional delegation, Sen. Cornyn and I, and the members of Congress both Republicans and Democrats will stand united as Texans in support of the federal government fulfilling its statutory obligations, and stepping in to respond to this natural disaster.

Sen. Cruz sang a completely different tune in 2013 when he called federal aid for the victims of Hurricane Sandy wasteful:

Two-thirds of this spending is not remotely “emergency”; the Congressional Budget Office estimates that only 30% of the authorized funds would be spent in the next 20 months, and over a billion dollars will be spent as late as 2021.

This bill is symptomatic of a larger problem in Washington – an addiction to spending money we do not have. The United States Senate should not be in the business of exploiting victims of natural disasters to fund pork projects that further expand our debt.

Back to the CNN article for more Cruz climate change philosophy:

“It used to be [that] it is accepted scientific wisdom the Earth is flat, and this heretic named Galileo was branded a denier,” he said in an interview with the Texas Tribune.

Cruz also argued that “global warming alarmists” aren’t basing their arguments on facts, because “the satellite data demonstrate that there has been no significant warming whatsoever for 17 years.”

Oh really? The point of the article is that Cruz and other Republicans may be leaning toward more moderate attitudes toward climate change research. I’ll believe that when I see it.

Think Progress: If You’ve Wondered Why So Many Politicians Deny Climate Change, Science Has Your Answer. 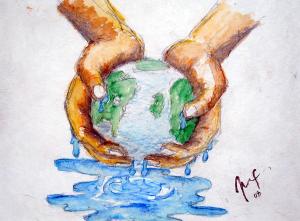 Bobby Jindal got some attention in Politico for attacking another member of the GOP clown car: Bobby Jindal slams Rand Paul as unfit to be commander in chief.

Louisiana Gov. Bobby Jindal lashed out at Sen. Rand Paul for his recent comments about the Islamic State, saying the presidential contender is unfit to be commander in chief and is taking the “weakest, most liberal Democrat position” when it comes to fighting the militant group.

Using unusually harsh rhetoric and an unusual forum, Jindal posted a statement condemning Paul on Wednesday on his “office of the governor” website.

“This is a perfect example of why Senator Paul is unsuited to be Commander-in-Chief,” Jindal said. “We have men and women in the military who are in the field trying to fight ISIS right now, and Senator Paul is taking the weakest, most liberal Democrat position. It’s one thing for Senator Paul to take an outlandish position as a Senator at Washington cocktail parties, but being Commander-in-Chief is an entirely different job. We should all be clear that evil and Radical Islam are at fault for the rise of ISIS, and people like President Obama and Hillary Clinton exacerbate it.”

The statement from Jindal, who is also a likely GOP presidential contender, came after the Kentucky Republican suggested Wednesday morning that hawkish members of his party were to blame for the rise of the Islamic State, also called ISIL or ISIS.

Paul said on MSNBC’s “Morning Joe” that “ISIS exists and grew stronger because of the hawks in our party who gave arms indiscriminately and most of those arms were snatched up by ISIS.”

In 2006, Jim Bob told Springdale police that he took Josh to see State Trooper Joseph Hutchens and that Josh “admitted to Hutchens what [Josh, redacted] had done,” according to the police report, obtained exclusively by In Touch through the Freedom of Information Act. At this point, there were five victims and multiple molestations by Josh….

Hutchens is serving 56 years in prison for child pornography and admits his “reputation is shot.” He was interviewed by a representative of a local law firm at In Touch‘s request and promised nothing in return for his recollections.

Hutchens’ failure to report the abuse caused the police to halt their 2006 investigation because the statute of limitations ran out.

In the new interview from prison, Hutchens said he was told by Jim Bob and Josh that “Josh had inappropriately touched [redacted] during the time she was asleep. He said he touched her through her clothing and he said it only happened one time.”

He said the fact that it was a one-time incident influenced his decision not to report it. “I did what I thought was right and obviously it wasn’t,” he says. “If I had to do it over again, I would have told him immediately I am going to call the hotline and contacted the trooper that worked those cases and have a full report made. I thought I could handle it myself.

The Duggar family is so corrupt that I expect there could be new revelations about them for months to come.

[W]hat does Jim Bob think of his own response to his son’s familial abuse? In a brief statement to People, Jim Bob and Michelle said last week that “that dark and difficult time caused us to seek God like never before.” Maybe that’s because Jim Bob publicly stated during his 2002 campaign for U.S. Senate that he thinks incest should be punishable by death.

Jim Bob’s platform on his campaign website—preserved via web cache—states that he believes “rape and incest represent heinous crimes and as such should be treated as capital crimes.” Jim Bob offered this belief to explain his position on abortion (only acceptable if both the mother and the baby were going to die anyway, of course)

See the screen shot at the link.

Other stories worth checking out, links only

A story from Politico that will make you–if not Charles Pierce–want to drink antifreeze: Dems view Sanders as bigger threat than O’Malley.

Since O’Malley is no threat at all, how worried could Dems really be?

Ezra Klein pontificates at length about why the SCOTUS anti-Obamacare case is total B.S.: The New York Times blows a hole in the case against Obamacare.

I haven’t read this story from the NYT yet, but I’ll bet it’s hilarious: What George PatakiWould Need to Do to Win. One more clown for the clown car.

NYT reports Climate news from India: Indians Scramble for Heat Relief, but Many Must Still Work.

What stories are you following today? Please post your thoughts and links in the comment thread and have a tremendous Thursday!