First up, World in Chaos, by Gary McCoy

How did the world get so crazy so quickly? Today’s top story is Iraq. It seems as if everyday there’s a different trouble spot. 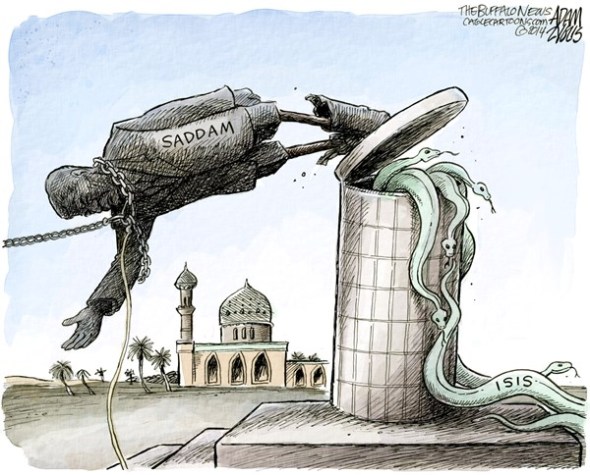 If only George W. Bush hadn’t gotten us ensnared in Iraq and Afghanistan! How could Americans forget the lessons of Vietnam? Will we ever escape?

Back in Iraq, by John Darkow

U.S. jets take to skies again over northern Iraq, a day after strikes on Islamic State.

KALAK, Iraq — American fighter jets roared over the new front lines in northern Iraq Saturday but did not strike, a day after airstrikes on Islamist militants in the region put the U.S. military back in action in Iraqi skies less than three years after troops withdrew and President Obama declared the war over.

The strikes Friday were limited in scope but helped temper days of building panic across the north of the country as militants with the extremist Islamic State sliced through a string of towns and villages scattered on the outskirts of the Kurdish region and sent tens of thousands of civilians fleeing for their lives.

The airstrikes also presented the first significant challenge yet to months of unchecked expansion by the al-Qaeda offshoot, which has swept through much of Iraq and neighboring Syria over the past year, annihilating its opponents, capturing valuable resources and declaring the creation of an Islamic caliphate in a nation-size chunk of territory.

With rise of Islamic State, Christians feel Iraq is no longer home.

They have gone from comfortable lives in historic towns and villages in Iraq’s parched Nineveh plains to the precarious existence of refugees unsure about their next meal and where they will spend the night — and even whether they belong in this country anymore.

“We have no safety, no security, no guarantees of anything,” said Alhaan Mansour, 33, as her 6-year-old son, Gaid, clung to her and listeners nodded in fervent agreement. “This is no life for anyone. We need a place where we can be safe and live our lives.”

The world has watched as an extremist group that dubs itself the Islamic State emerged from the chaos of the Syrian civil war to carve out a self-proclaimed caliphate that some say is now the size of the state of Indiana. Uncounted multitudes of Syrians and Iraqis, most of them Muslim, have become casualties.

But for the Christian minority of northwest Iraq, the militants’ onslaught has been nothing short of a catastrophe. In the last week, most of the Christian communities of the Nineveh plains have been overrun, forcing perhaps 100,000 people to flee, many to the semiautonomous Kurdish zone that has its capital here.

Even before the latest exodus, Christians had to evacuate the city of Mosul, long home to a vibrant Christian community, or face death at the hands of the extremists.

No Exit, by David Horsey

Analysis: Limited U.S. strikes in Iraq may not work.

In authorizing targeted air strikes against Islamic militants in Iraq, President Obama has opted to avoid the all-out “shock and awe” campaigns of previous U.S. conflicts in Iraq.

Air strikes will be limited to defending American forces and supporting a humanitarian effort to provide food and water to thousands of starving Yazidi refugees who have fled Islamic State militants because they practice a different religion.

That response may prove inadequate to force the retreat of a surprisingly ferocious enemy that has evolved into a conventional army equipped with tanks and heavy weapons. Many of those weapons, including Humvees and artillery, are American-made and were seized from Iraqi national troops who fled Mosul, Iraq’s second-largest city, when the militants attacked in June.

The air strikes will be limited in scope and not part of “a larger air campaign at this point,” a senior defense official said Friday. He asked not to be named because he was not authorized to talk publicly about the decision.

Isn’t that just ducky? But wait —  President Obama just told us that the airstrikes are working.

U.S. airstrikes against militant Islamist rebels and humanitarian airdrops in Iraq have weakened the rapidly advancing fighters and successfully delivered “thousands of meals and gallons of water” to tens of thousands of refugees, President Barack Obama said Saturday.

Obama said in a nationally televised news conference from the South Lawn of the White House that “we will not have troops again in Iraq,” but he said he was determined not only to “protect our American citizens in Iraq” but also to prevent “an act of genocide” against the refugees. He said the United Kingdom and France had agreed to join the U.S. in providing humanitarian assistance.

U.S. jets launched airstrikes Friday on isolated targets to stem the advance of fighters of the Islamic State of Iraq and al-Sham, who have trapped tens of thousands of Christians and ethno-religious Yazidi on a mountaintop in northern Iraq. The U.S. also said it made a second airdrop of food and waterFriday to the refugees.

I sure hope he’s right.

The anniversary of Richard Nixon’s resignation is also in the news. It happened 40 years ago today.

Forty years ago today President Richard M. Nixon told the nation that he had decided to resign from office, effective at noon, Aug. 9, 1974. The long-building scandal of Watergate had finally cost Nixon theWhite House, the political prize he had sought all his adult life.

He had little choice. It was either quit or be forcibly ousted from the Oval Office. The previous evening, Sen. Barry Goldwater of Arizona and two other top congressional Republicans had told him he would be impeached by the House and convicted in the Senate if he fought on. His support among the public had finally collapsed. Fifty-seven percent of US voters thought he should be removed from the presidency, according to Gallup figures.

His approval rating was an abysmal 24 percent.

Today’s voters, inured by years of partisan strife, a 2000 presidential election decided in the courts, and the impeachment of President Clinton, might find it hard to imagine the turmoil then roiling the US electorate. Vietnam, and then Watergate, had split the nation more deeply than anything since the civil war. Nixon’s televised farewell address to the nation began at 9:00 p.m. Eastern time, and when he uttered the fateful line “I shall resign the presidency at noon tomorrow,” the roar from protesters gathered in Lafayette Square was so loud that reporters watching the feed of the speech in the White House basement could not hear the next line.

The Weird Minutes Before Nixon’s Resignation

Many Americans remember the telecast during which Richard Nixon announced his resignation from the Presidency, forty years ago today, as a dark moment in the nation’s history. Watching the Leader of the Free World crumple in disgrace induced a mordant glee in certain quarters, but it was still a grim spectacle. The comedian Harry Shearer has another word for the events of that night: “goofy.”

In the clip below, you can watch Shearer (who is perhaps best known as the bassist in “This Is Spinal Tap” and as the voice of Mr. Burns and several other characters on “The Simpsons”) play Nixon in a verbatim reënactment of what happened in the Oval Office in the minutes directly before and after the resignation. Shearer strides in, as Nixon did that night, a man seemingly unperturbed by the fact that he is now probably the most widely despised American political villain of the twentieth century. He joshes inanely with the TV crew, who respond with shuffling embarrassment. There are only a few moments—like when Nixon snaps at a photographer for taking too many pictures—that he acts like he’s about to deliver anything more serious than the annual turkey pardon.

When you watch the actual footage from that evening, recorded by one of the TV cameras in the room, Nixon’s swaggering tone-deafness will make you squirm. Shearer’s reënactment magnifies that effect, both because the use of multiple cameras provides detail and depth, and because presenting the episode as a dramatic scene underlines the strangeness of the President’s behavior.

More about Harry Shearer’s show at the link.

The Ghost of Richard Nixon, by Dave Granlund 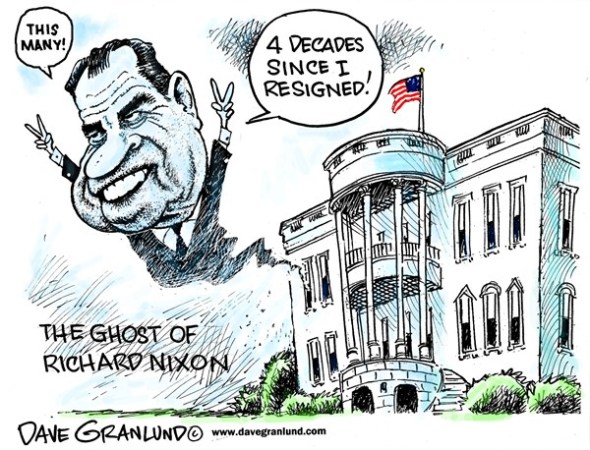 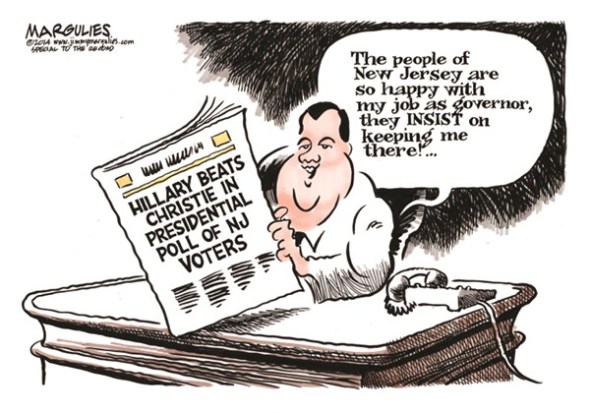 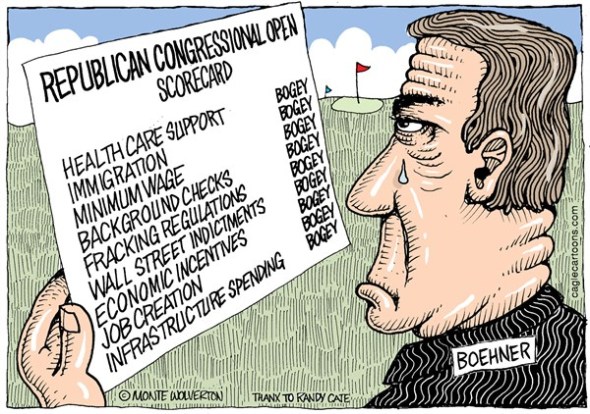 Have a great weekend, everyone!!