← Sunday Reads: Getting ready for the next round…
Friday Nite Lite: Outta State, Outta Mind →

Good afternoon, newsjunkies. Sorry for the belated Saturday reads. I went to sleep with a pounding headache and woke up very late.

To the right: Still4Hill used this photo to highlight Hillary’s public appearances this week, which included mother-daughter time. Here’s the backstory on the photo, from when Chelsea first tweeted it over the summer. I thought it was the perfect image to open with this weekend.

Just going to dive right in with the reads, so as to get this post up ASAP.

The latest news on Syria of course is that the US and Russia have agreed on framework for Syria’s surrender of chemical weapons. Thoughts? Here’s Taylor Marsh’s take. Shorter TM:

So, as media outlets blast that there is “a deal,” caution should also be applied, because this is a framework that extends into 2014 and will likely meet many challenges and road blocks.

I think that’s the bottom line really. Hope for the best, understanding that we really just have to wait and see how this plays out.

Here’s an interesting FP read from yesterday — How Assad Could Twist a Chemical Weapons Treaty to Keep His Poison Gas:

“The Chemical Weapons Convention was created to deal with a very different type of set of circumstances,” said Daryl Kimball, the executive director of the Arms Control Association. “It was designed to deal with a country that was willing to renounce its chemical weapons voluntarily and not under coercion, a country where there was no real chance of them being used again, and a country that was stable enough that they could be destroyed safely. None of those conditions exist in Syria.”

Kimball is a fan of the treaty who believes it has proven effective over the years and is a far better option than trying to use force to degrade Assad’s chemical weapons facilities. Still, he said, Syria will be an “unprecedented test” of the treaty.

The piece goes on to outline specifics in terms of the obvious and not-so-obvious concerns that disarming Syria of its chemical ammo entails. Give it a read.

Another headline that caught my eye over at FP on quick glance this morning — The Price of Proxies — Don’t be fooled: The United States is already knee-deep in the Syrian quagmire, and the opportunity costs are disturbing (also bylined as “How Arming Syria’s Good Guys Helps the Region’s Bad Guys” on the webite’s frontpage,  which says a mouthful in itself.)

Here’s a lighter read from FP before I move on to another set of links — 7 Things Putin Loves That America Really Is Exceptional At. I’ll give you the quick list so you don’t have to click over for the rundown:

Next up, a local story from our mayor here in Houston from April, that I saw linked to on FP for some reason — Annise Parker’s personal story about homelessness:

It’s a little over 20 minutes long. I recommend taking the time to watch it.

Speaking of homelessness, let me turn briefly to the latest update from CNN on a natural disaster displacing Americans right now…

My heart goes out to Colorado, including anyone here reading who is from the area or with loved ones affected.

Here’s my feminist link for you this week, via New York mag: 39 Things We’ll Miss About Patriarchy, Which Is Dead. Don’t let the title fool you. Go read now.

My two–who knew all we had to do was “just say no” to patriarchy and poof, all the misogynists would listen just like that.

I’d like to close with a couple of Hillary links via the ever-awesome Still4Hill of course:

Hillary Clinton’s Remarks at the White House on Syria and the Security Dangers of Wildlife Trafficking — Click over for pics of Hillary and Chelsea from Monday. Here’s my fav: 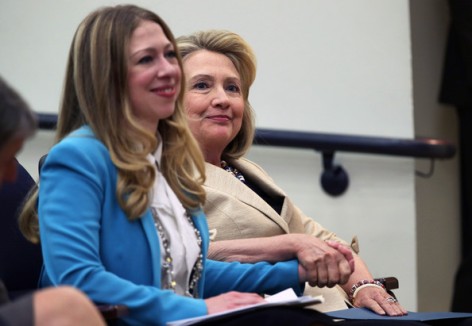 Alright, just going to go ahead and post this now so as to get the show on the road. Fill up the comments, Sky Dancers! And, have a great weekend.