(So boring, in fact, that recall Goldberg and/or his wife fed stale old anti-Hillary canards about tea, cookies, and bra-burning for Palin’s America by Heart.)

Keep your popcorn bowls handy, newsjunkies, as we continue to watch the heads explode on all the dodos.

Next up… Two patriarchy-smashing parodies of the misogynist-yet-insidiously catchy earworm that is Robin Thicke’s “Blurred Lines.” I recommend taking the time to view the videos below at some point this weekend if you haven’t seen them already. (Especially after Thicke went on the Today show this week claiming his original track to be “great art” and a “feminist movement in itself.”)

From the video’s description:

It’s our opinion that most attempts to show female objectification in the media by swapping the genders serve more to ridicule the male body than to highlight the extent to which women get objectified and do everyone a disservice. We made this video specifically to show a spectrum of sexuality as well as present both women and men in a positive light, one where objectifying men is more than alright and where women can be strong and sexy without negative repercussions.

The other video is Melinda Hughes’ “Lame Lines”:

From the lyrics, as transcribed in Hughes’ youtube description:

There are a lot of other parodies out there, but these two had a distinctly gender bender vibe to them. So, what do you think Sky Dancers? Did these versions succeed?

Switching gears a bit, here’s an interesting piece from AlterNet by Bruce E. Levine, called “Why Life in America Can Literally Drive You Insane” with the byline “it’s not just Big Pharma” underneath:

In “The Epidemic of Mental Illness: Why?” (New York Review of Books, 2011), Marcia Angell, former editor-in-chief of the New England Journal of Medicine, discusses over-diagnosis of psychiatric disorders, pathologizing of normal behaviors, Big Pharma corruption of psychiatry, and the adverse effects of psychiatric medications. While diagnostic expansionism and Big Pharma certainly deserve a large share of the blame for this epidemic, there is another reason.

A June 2013 Gallup poll revealed that 70% of Americans hate their jobs or have “checked out” of them. Life may or may not suck any more than it did a generation ago, but our belief in “progress” has increased expectations that life should be more satisfying, resulting in mass disappointment. For many of us, society has become increasingly alienating, isolating and insane, and earning a buck means more degrees, compliance, ass-kissing, shit-eating, and inauthenticity. So, we want to rebel. However, many of us feel hopeless about the possibility of either our own escape from societal oppression or that political activism can create societal change. So, many of us, especially young Americans, rebel by what is commonly called mental illness.

Ah, yes, I believe I called it when I first coined the phrase, “Political Affective Disorder.”

It’s a long read, and not one I can yet say I fully endorse or not, particularly on the issue of diagnosis and the author’s attitude toward the DSM as nothing more than “pseudoscience.”

As a student of the psychological discipline, I am still taking my sweet time to form an opinion on the DSM-5 and the food fight between its proponents and detractors. The DSM in all its versions thusfar has been far from a perfect venture, but having  gotten to hear directly from one of the Work Group chairs that was at the frontlines of changes for her respective category at a mental health conference last month, I have to say it makes a difference to hear from the horse’s mouth the reasoning that went into each change, as opposed to reading about it in an op-ed. That’s a rant for another time, though!

Suffice it to say, Levine’s essay is thought-provoking and raises important points for debate. I have long-thought there was a social rebellion aspect to mental illness. (Cassandra, anyone?)

Excerpt from the piece, with some relevant survey trends and research stats on the current state of the American Dream/Nightmare:

Returning to that June 2013 Gallup survey, “The State of the American Workplace: Employee Engagement,” only 30% of workers “were engaged, or involved in, enthusiastic about, and committed to their workplace.” In contrast to this “actively engaged group,” 50% were “not engaged,” simply going through the motions to get a paycheck, while 20% were classified as “actively disengaged,” hating going to work and putting energy into undermining their workplace. Those with higher education levels reported more discontent with their workplace.

How engaged are we with our schooling? Another Gallup poll “The School Cliff: Student Engagement Drops With Each School Year” (released in January 2013), reported that the longer students stay in school, the less engaged they become. The poll surveyed nearly 500,000 students in 37 states in 2012, and found nearly 80% of elementary students reported being engaged with school, but by high school, only 40% reported being engaged. As the pollsters point out, “If we were doing right by our students and our future, these numbers would be the absolute opposite. For each year a student progresses in school, they should be more engaged, not less.”

Life clearly sucks more than it did a generation ago when it comes to student loan debt. According to American Student Assistance’s “Student Debt Loan Statistics,” approximately 37 million Americans have student loan debt. The majority of borrowers still paying back their loans are in their 30s or older. Approximately two-thirds of students graduate college with some education debt. Nearly 30% of college students who take out loans drop out of school, and students who drop out of college before earning a degree struggle most with student loans. As of October 2012, the average amount of student loan debt for the Class of 2011 was $26,600, a 5% increase from 2010. Only about 37% of federal student-loan borrowers between 2004 and 2009 managed to make timely payments without postponing payments or becoming delinquent.

In addition to the pain of jobs, school, and debt, there is increasingly more pain of social isolation. A major study reported in the American Sociological Review in 2006, “Social Isolation in America: Changes in Core Discussion Networks Over Two Decades,” examined Americans’ core network of confidants (those people in our lives we consider close enough to trust with personal information and whom we rely on as a sounding board). Authors reported that in 1985, 10% of Americans said that they had no confidants in their lives; but by 2004, 25% of Americans stated they had no confidants in their lives. This study confirmed the continuation of trends that came to public attention in sociologist Robert Putnam’s 2000 book Bowling Alone.

Oh dear, this makes me want to get into a dialectic with me and myself about Tonnies’ small town Gemeinschaft and big city Gesselschaft and Durkheim’s Anomie.

I’ll spare you and just quote another paragraph from Levine’s piece on Alter Net before I close:

The reality is that with enough helplessness, hopelessness, passivity, boredom, fear, isolation, and dehumanization, we rebel and refuse to comply. Some of us rebel by becoming inattentive. Others become aggressive. In large numbers we eat, drink and gamble too much. Still others become addicted to drugs, illicit and prescription. Millions work slavishly at dissatisfying jobs, become depressed and passive aggressive, while no small number of us can’t cut it and become homeless and appear crazy. Feeling misunderstood and uncared about, millions of us ultimately rebel against societal demands, however, given our wherewithal, our rebellions are often passive and disorganized, and routinely futile and self-destructive. 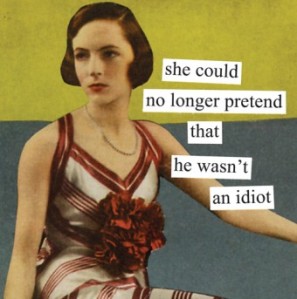 I can attest to that much personally, having gone through the self-destructive, passive slow suicide of anorexic rebellion in my adolescence and into my twenties and the process of recovery and trying to reclaim my identity now into my thirties (as a patriarchy-smashing-archery-goddess-witchy-woman-feminist of course!)

Give Levine’s article a read in full if you have the time. I would love to hear everyone’s thoughts, especially from Dr. Bostonboomer, our resident psychologist.

Alright, well that’s all I’ve got for you this morning.

What’s got your blogger juices going this Saturday, Sky Dancers? Let us have a listen in the comments, and have a great weekend!