Another Update to the Ever-Expanding Boston Bombing Story

I thought I should put up another update, because there has been a lot more walking back of the reports that came out yesterday, not only about whether Ibragim Todashev was holding a knife when he supposedly “lunged” at an FBI agent, but also whether Todashev had even been questioned about involvement in the 2011 triple murder in Waltham MA with which Massachusetts officials have been trying to connect Tamerlan and Dzhokhor Tsarnaev.

This morning The Wall Street Journal reported that Reni Manukyan who is married to Ibragim Todashev–the man who was shot while being interrogated by several law enforcement officers in Orlando, Fl early yesterday–claim neither she nor her husband were ever asked about the murders.

Reni Manukyan, a 24-year-old assistant hotel-housekeeping manager who married Ibragim Todashev at a mosque near Boston in July 2010, says agents from the Federal Bureau of Investigation arrived at her house in Atlanta and her mom’s house in Savannah, Ga., on Tuesday night, the same time they started questioning her late husband at his home in Orlando.

Ms. Manukyan says the FBI agents who came to her house asked about alleged Boston Marathon bomber Tamerlan Tsarnaev, whom she says her husband met after moving to the Boston area from Russia in 2008.

But she says the agents never asked about a Sept. 11, 2011, murder in Waltham, Mass., in which three victims—25-year-old Brendan Mess, 31-year-old Erik Weissman and 37-year-old Raphael Teken—were found dead with their throats slit and bodies covered in marijuana and cash….

She says that agent question her several times as they did her husband, and that he couldn’t have been involved in the murders since he doesn’t drink or use drugs of any kind. She doesn’t even think he was in Boston in September of 2011.

The Boston Globe also has a story that walks back a number of yesterday’s reported leaks from investigators. According to the Globe, Todashev’s close friend and former roommate Khusen Taramov also claims Todarov was never questioned about the Waltham murders. He

said the two had been interviewed many times by FBI agents, and had been followed for weeks by an unmarked law enforcement vehicle since the Marathon bombings.

Taramov, a fellow Chechen and immigrant from Russia, said his slain friend had been called almost daily by agents since the bombings, but Todashev had been assured that the Tuesday night interview would be the final one.

“They told us they needed just one more interview,” he said. “They said the case was closed after this.”

Fearful it would make them look suspicious, neither he nor Todashev had a lawyer present during the FBI questioning, Taramov said.

Taramov, who said he had spent nearly every moment with Todashev since the bombing, insisted that his friend had never been asked about the triple slaying in Waltham.

Manukyan and Taramov both say that Todashev did not have radical beliefs. He was just a normal Muslim. So what the heck is going on here?

At the Atlantic, Alexander Abad-Santos does a very good job of tracing down yesterday’s reports on whether Todashev had a knife before he was shot and whether he was questioned about and/or admitted to the Waltham murders and where these reports originated. Abad Santos writes:

A confession would have solved the triple homicide, and it would have cemented Tsarnaev’s role in that crime. Since reading Dzhokhar Tsarnaev his miranda rights, investigators haven’t been able to extract information about the Tsarnaevs as freely as they’d like — or at least it hasn’t spilled out in public as much as the people of Boston would like to hear. A confession might have been a big piece in the puzzle of the Tsarnaev brothers. Instead, we’re left with a Jack Bauer-style tale of secret confessions turned deadly, with more questions than answers.

What’s perhaps more puzzling is that the story doesn’t seem to add up: What new piece of information makes a guy who has been cooperating with FBI agents for the last month or so turn on them? Could the seizure of the computer have led to more revelations? Could the threat of jail time have dawned on him? And even more macabre, one of Todashev’s friends told NBC Orlando that he had been questioned with Todashev by agents on Tuesday night — and that Todashev felt like he was going to die. “He felt inside he was going to get shot,” Khusen Taramiv said. “I told him, ‘Everything is going to be fine, don’t worry about it.’ He said, ‘I have a really bad feeling.'” 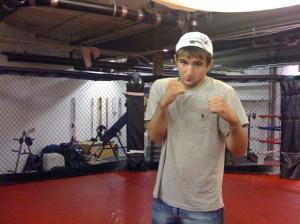 Jerelyn at Talk Left also breaks down the various reports and speculates about what might have happened. She also calls attention to another bit of information–that Todashev had a girlfriend named Tatiana Gruzdeva (this may be her Facebook page), and she was arrested by ICE on May 16 and is currently in custody for immigration violations.

Anyone with a shred of empathy could certainly understand why someone who has been shadowed by the FBI for the past month, interrogated repeatedly for hours, and then accused of murder–plus his girlfriend has been turned over to immigration authorities (a common FBI tactic to get information)–might get angry and perhaps make a sudden move. But did he really have to die when there were at least four law enforcement officers in the room with him at the time?

FBI interviews aren’t usually recorded. I doubt we’ll ever know what transpired during the interview. We’ll only get self-serving statements by law enforcement that justify their actions.

That some of these law enforcement officials use the words “implicated himself” as opposed to “confessed” in relation to the killings doesn’t mean Todashev acknowledged a role in the killings. If he was in Boston, it could mean something as little as Tamerlan called him that night and asked him to pick him up and give him a ride, or that Tamerlan later gave him some items that would link Tamerlan to the killings. Since Tamerlan is dead, he can’t defend himself against the murder charges law enforcement seems determined to attach to him. (Neither can Todashev.) Even if they find Tamerlan’s DNA at the home of the murdered men, it doesn’t mean he was involved in the murder. Since Tamerlan and one of the victims were good friends, if the DNA is just found somewhere in the home or on clothes or a drinking cup, it could have been deposited prior to the day of the killings.

I am not buying the unconfirmed report that he suddenly went beserk when asked to sign a written confession. Or that he confessed to the murders. He may have said something that the agents believed to be incriminating, but that doesn’t mean Todashev intended it that way or agreed with their interpretation.

I don’t doubt that he “got volatile” at the end — FBI agents don’t execute people for no reason. (Whether the shooting was an overreaction is another question.) But as to what set him off, it could be that after whatever he said that the agent thought was incriminating, the agent told him he was being arrested for the murders, and he reacted angrily because he believed he was being unjustly accused.

There’s more. You can read it at the link.

At this point, all we know for sure is that a witness with valuable information about Tamerlan Tsarnaev is dead. We don’t know who killed him or even whether more than one of the officers present shot him. A team of FBI agents will determine if the shooting was justified, but most likely they’ll find a way to absolve their fellow officers.