Wow. The Village pundits are so wound up over the “sequester” these days that I hate to think what’s going to happen over the weekend when the automatic budget cuts have taken effect. Will there be weeping and wailing instead of dancing at Disco Dave’s place? Will Bob Schieffer have to talk David Ignatius off a ledge? Will Dana Millbank freak out and require hospitalization? Will Bob Woodward’s hair catch fire? Will Major Garrett spontaneously combust?

Honestly, I’ve never seen anything like the temper tantrums the Village pundits have been throwing over the past week or two; and now that they are finally realizing that they’re not going to get the White House and Congress to agree to replace the “sequester” with Simpson Bowles 2.0, they’ve begun to scream and stamp their feet. I’m afraid one of them may throw himself to the floor and have a kicking and shrieking tantrum soon.

First up, Bob Woodward. Last Friday, the poor, frustrated stuffed shirt published a hectoring op-ed in the Washington Post in which he assigned full blame for the “sequester” to President Obama. As evidence, Woodward misleadingly sourced his own book on last year’s debt limit fight. He was rounding mocked on numerous liberal websites, and that must have really gotten his dander up.

Washington Post reporter Bob Woodward’s ongoing war of words with President Barack Obama’s White House escalated on Wednesday when Woodward took to the set of MSNBC’s Morning Joe to slam the president’s handling of the sequester fight. Woodward said that the president has displayed a “kind of madness” in his decision to make those cuts as painful and deleterious to the nation’s war fighting capability as possible….

He then turned to the sequester: “I think peoples’ heads are about to explode about all of this, you know, what the hell is going on here,” Woodward said. “I’m not sure the White House understands exactly what happened in all of these negotiations at the end of 2011 with the sequester and the super committee, because they were really on the sidelines.”

Woodward slammed Obama’s decision to announce that sequester cuts would force an American aircraft carrier to not deploy to the Persian Gulf.

“Can you imagine Ronald Reagan sitting there and saying ‘Oh, by the way, I can’t do this because of some budget document’?”

h/t to TPM and to RalphB for the catch!

We have a political system that is the equivalent of a drunk driver. The primary culprits are the House Republicans. They are so intoxicated with their own ideology that they are ready to drive the nation’s car off the road. I don’t know if the sequestration that’s set to begin Friday will produce a little crisis or a big one; the sad fact is that the Republicans don’t know, either, yet they’re still willing to put the country at risk to make a political point.

At least Ignatius admits the Republicans are mostly to blame for the crisis. But…

I’m no fan of the way President Obama has handled the fiscal crisis. As I’ve written often, he needs to provide the presidential leadership that guides Congress and the country toward fiscal stability. In my analogy, he should take the steering wheel firmly in hand and drive the car toward the destination where most maps show we need to be heading: namely, a balanced program of cuts in Social Security and Medicare and modest increases in revenue.

Why is it always Social Security and Medicare that these guys want to cut? Surely there has to be a better way to deal with the noncrisis than to starve granny and then refuse her health care when she’s dying in the street? 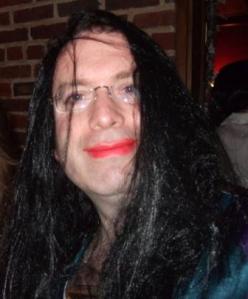 On Tuesday morning, as President Obama and House Republicans were abandoning hope of reaching a compromise to avoid across-the-board spending cuts on March 1, the indefatigable duo of Erskine Bowles and Alan Simpson made one more attempt to float a bipartisan compromise. They were literally shouted down.

Seconds after Bowles and Simpson were introduced at a breakfast forum hosted by Politico, hecklers in the audience began to interrupt: “Pay your share of taxes! Stop cutting jobs! Stop cutting Medicare and Medicaid!”

“Wait your turn,” pleaded the moderator, Politico’s Mike Allen, as the half-dozen demonstrators were gradually removed.

These politicians aren’t “serious,” Millbank tut tuts, claiming that “neither [Obama nor Boehner] is offering anything close to a workable plan.”

I’ve left the best (or worst, depending on your point of view) for last. Major Garrett’s bizarre and incomprehensible (to me anyway) op-ed in the National Journal: Tennessee Williams Offers Window Into the Mendacity That Defines the Sequester. 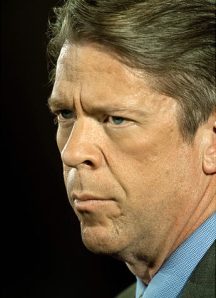 According to Garrett, the way to understand the “sequester” is to listen to Big Daddy in Cat on a Hot Tin Roof. The problem is “mendacity,” which is a fancy word for lying.

How can anyone look upon the sequester with anything but revulsion and venom — the kind of smoldering rage that spills out of Big Daddy Pollitt (played by Burl Ives in the 1958 movie) when he begins to peel back the slippery layers of deception that defined his seemingly respectable Mississippi Delta life. Big Daddy’s life and all those who spin around it are reduced, as if by the centripetal force of fakery, into one word: mendacity.

Williams was not speaking for the South or plantation owners, but everyone who can kid themselves into believing something that simply isn’t true. Acid drips from Big Daddy’s sweet-sounding and recurrent question: “Wouldn’t it be funny if that was true?” After listening to all the varied finger-pointing and blame-shifting on our latest budget crisis, I will from now substitute the word “mendacity” for “sequester.”

Encapsulated within the confines of a tortured Mississippi family, Tennessee Williams captured in the 1950s a bit of the writhing, frustrating, and at times grotesque antics of modern American budget mendacity. In his immortal Cat on a Hot Tin Roof, Big Daddy Pollitt and his son Brick — a high school football hero turned town drunk — argue over Brick’s refusal to see the consequences of his drinking, how his indolence breeds chaos in the lives of others. Earlier, Brick speaks mournfully of mendacity — the lies of his young life.

Big Daddy: “But it’s always there in the mornin’, ain’t it—the truth? And it’s here right now. You’re just feeling sorry for yourself; that’s all it is — self-pity.… Life ain’t no damn football game. Life ain’t just a buncha high spots. You’re a 30-year-old kid. Soon you’ll be a 50-year-old kid, pretendin’ you’re hearin’ cheers when there ain’t any. Dreamin’ and drinkin’ your life away. Heroes in the real world live 24 hours a day, not just two hours in a game. Mendacity, you won’t … you won’t live with mendacity but you’re an expert at it. The truth is pain and sweat and payin’ bills.”

Garrett doesn’t mention that Brick’s drinking and “indolence” stems from clinical depression triggered by denial of his homosexuality, but maybe Garrett doesn’t know that. But we now know how what Garrett believes is the solution to the financial noncrisis:

Our mendacities now are about dollars and cents. We hate ourselves, at some level, for being unable to produce enough to pay our bills. Our politics invites us to dream our life away. But the sequester and the fiscal cliff and the debt/default drama fractiously and dramatically remind us of our limits. We are frustrated. We don’t want to live with mendacity. But, sadly, we’ve become experts at it.

The truth is pain and sweat and payin’ bills.

Except that American does pay its bills and will continue to do so unless the Republicans refuse to raise the debt ceiling. And yes, as Garrett writes, most American families pay their bills too. But just like the federal government, most American families go into debt in order to buy a house or a car. Only the very richest among us can pay cash for those items. Like the government, families borrow and then pay the loans back with interest.

If anyone can figure out what else Garrett is trying to say, I’d be glad to hear it. Frankly, I think he’s lost his mind, and so have the rest of these Village idiots. I’m going to be fascinated to watch what happens to them over the next few days as their Simpson-Bowles fantasies crash and burn.

31 Comments on “President Obama Is Driving The Village Pundits Insane!”