So many people have been giving President Obama advice about the debate today, that I’m beginning to feel sorry for the guy. Just listening to Hardball tonight, I heard so many points Obama must hit that there is just no way any human being could possibly meet all the demands they’re putting on him.

As Dak said earlier, I just hope Michelle lit a fire under the President. We’ll find out pretty soon.

Instead of a bunch of links to pundits spouting nonsense, I’ve got a few cartoons to get you warmed up for the big rematch between President Barack Obama and challenger Mitt Romney. I see that JJ has already post some cartoons, but what the heck. I have more for you.

I really liked this one a lot: Obama’s Debate Prep 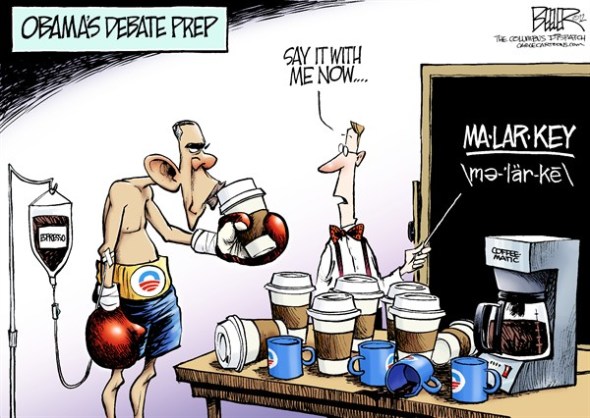 I was so surprised when I learned that lots of people had to look up the word “malarkey” after Biden said it. I really must be getting old, because people said that all the time when I was growing up.

And another one… What He Said

The debate begins in just about an hour. What are you expecting? Do you think Obama can do what he has to do? Will Romney commit one of his super-rich, out-of-touch gaffes? Let us know what you think?