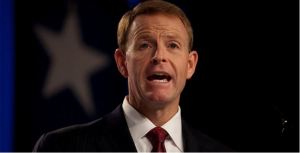 If Tony Perkins is “mainstream,” we’re all in deep trouble

In his latest column, Dana Millbank takes the Village journalists’ “both sides do it” routine to such irrational extremes that he loses all credibility.

The “hate group” that the Republicans’ vice presidential candidate would be addressing? The Family Research Council [FRC], a mainstream conservative think tank founded by James Dobson and run for many years by Gary Bauer.

The day after the gay rights group’s alert went out, 28-year-old Floyd Lee Corkins II walked into the Family Research Council’s Washington headquarters and, according to an FBI affidavit, proclaimed words to the effect of “I don’t like your politics” — and shot the security guard. Corkins, who had recently volunteered at a gay community center, was carrying a 9mm handgun, a box of ammunition and a backpack full of Chick-fil-A — the company whose president recently spoke out against gay marriage.

Mercifully, the gunman was restrained, and nobody was killed.

Apparently Millbank made the logical leap of assigning cause and effect to two unrelated events that are close in time. Corkins must have read the HRC website and rush out to shoot someone. Or maybe Corkins was browsing the internet and came across the Southern Poverty Law Center website where the FRC is listed as a hate group.
Millbank says

Human Rights Campaign isn’t responsible for the shooting. Neither should the organization that deemed the FRC a “hate group,” the Southern Poverty Law Center, be blamed for a madman’s act. But both are reckless in labeling as a “hate group” a policy shop that advocates for a full range of conservative Christian positions, on issues from stem cells to euthanasia.

I disagree with the Family Research Council’s views on gays and lesbians. But it’s absurd to put the group, as the law center does, in the same category as Aryan Nations, Knights of the Ku Klux Klan, Stormfront and the Westboro Baptist Church. The center says the FRC “often makes false claims about the LGBT community based on discredited research and junk science.” Exhibit A in its dossier is a quote by an FRC official from 1999 (!) saying that “gaining access to children has been a long-term goal of the homosexual movement.”

Millbank seems to believe that the FRC is “mainstream” because it has been headed by Tony Perkins and Gary Bauer, and with his exclamation point after “1999” he seems to be implying that there is some kind of statute of limitations on hate speech.

I can’t follow his reasoning at all. He’s twisting himself into a pretzel in order to defend an organization that clearly works overtime to drum up hate, not only against the LGBT community, but also against women and anyone involved in providing family planning or abortion. Perkins has even argued against anti-bullying policies in schools, claiming they are part of the “homosexual agenda” to “redefine families.”

Millbank even quotes the National Organization for Marriage (NOM) to support his arguments!

The National Organization for Marriage, which opposes gay marriage, is right to say that the attack “is the clearest sign we’ve seen that labeling pro-marriage groups as ‘hateful’ must end.”

Here’s a little background on the NOM from Mother Jones:

Spokespeople for the National Organization for Marriage, such as Rev. William Owens, who exaggerated his civil rights background to justify his opposition to same sex marriage, have compared homosexuality to bestiality and child abuse. NOM’s man in Maryland, Bishop Harry Jackson, has compared gay rights groups to Nazis whose actions recall “the times of Hitler.” Most of NOM’s more high-profile spokespersons are more careful with their words, but beyond rhetoric, NOM has argued that gay judges should be barred from ruling on LGBT rights issues and embraced junk science to argue that gays and lesbians make worse parents.

I guess “Pro-marriage” is like “pro-life”–supporting certain kinds of marriage like the anti-abortion crown supports only fetal life.

Millbank may not want to actually blame the SPLC for the shooting, but Tony Perkins didn’t hesitate to do so.

The Family Research Council’s Tony Perkins accused the Southern Poverty Law Center — a civil rights organization dedicated to fighting hate and bigotry — of providing “license” for a man to shoot a security guard in the arm on Wednesday.

“Floyd Corkins was given a license to shoot an unarmed man by organizations like the Southern Poverty Law Center that have been reckless in labeling organizations hate groups because they disagree with them on public policy,” Perkins declared during a press conference on Thursday afternoon. “I believe the Southern Poverty Law Center should be held responsible that is leading to intimidation of what the FBI has characterized as domestic terrorism.” Corkins has since been charged for assault with a deadly weapon and could soon face federal charges. The guard, Leo Johnson, is in stable condition.

Asked by reporters why he thought the shooter was motivated by his distate for the group rather than mental incapacity, Perkins quipped, “How many unhinged individuals walk around with 15 Chick-fil-A sandwiches?”

So does that make the FRC responsible for the murders of abortion doctors like George Tiller?

Here are just a few examples of statements from the FRC on gays and lesbians. You can go to the links to read more.

Mother Jones: What the Right Gets Wrong about the FRC Shooting.

Perkins’ Family Research Council has practically cornered the market on anti-gay junk science. The Southern Poverty Law Center’s classification of the FRC as a hate group stems from FRC’s more than decade-long insistence that gay people are more likely to molest children. Spokespeople for the FRC have said that homosexual sex should be outlawed, and Perkins himself has said as recently as 2010 that “the research is overwhelming that homosexuality poses a danger to children.” Research from non-ideological outfits is actually firm in concluding the opposite. Some of the FRC’s more outrageous “studies,” such as the 1999 paper claiming that “one of the primary goals of the homosexual rights movement is to abolish all age of consent laws and to eventually recognize pedophiles as the ‘prophets’ of a new sexual order,” have been scrubbed from the group’s website, but the FRC has not disavowed their contents.

Gays are like a gun to the head of America

“one thing that has been interesting to me is the gay literature has come right out and said we can’t keep monogamy in our definition of marriage. We may have a significant relationship we’ll call marriage, but things like monogamy and fidelity, faithfulness, and lifetime kind of till-death-do-us-part commitments are a little unrealistic. So we want it to be marriage, but we don’t want it to be monogamous.” – Kristi Hamrick , http://www.frc.org/net/st96d2.html

“I know a guy who has just entered jail, tragically, because he grew up in a lesbian household. He still loves his mother and doesn’t really blame her, but he said, ‘You know, as a boy in a lesbian environment where it was intensely anti-male’ — that’s all he heard, this bitterness toward men — he said that he felt totally disenfranchised, began having sexual problems. He eventually became a voyeur, and he is in on a peeping Tom charge. He was so curious about how normal people have sex. We have other people that are cases like this.” – Robert Knight, http://www.frc.org/net/st96d2.html

The SPLC posted a response to Perkins on its website, calling the FRC claims “outrageous.”

Perkins’ accusation is outrageous. The SPLC has listed the FRC as a hate group since 2010 because it has knowingly spread false and denigrating propaganda about LGBT people — not, as some claim, because it opposes same-sex marriage. The FRC and its allies on the religious right are saying, in effect, that offering legitimate and fact-based criticism in a democratic society is tantamount to suggesting that the objects of criticism should be the targets of criminal violence.

As the SPLC made clear at the time and in hundreds of subsequent statements and press interviews, we criticize the FRC for claiming, in Perkins’ words, that pedophilia is “a homosexual problem” — an utter falsehood, as every relevant scientific authority has stated. An FRC official has said he wanted to “export homosexuals from the United States.” The same official advocated the criminalizing of homosexuality.

Perkins and his allies, seeing an opportunity to score points, are using the attack on their offices to pose a false equivalency between the SPLC’s criticisms of the FRC and the FRC’s criticisms of LGBT people. The FRC routinely pushes out demonizing claims that gay people are child molesters and worse — claims that are provably false. It should stop the demonization and affirm the dignity of all people.

The Family Research Council is an extreme right wing organization. Dana Millbank should hang his head in shame. Perkins is trying to make his group look like the victim of bigotry instead of the proponent of it, and Millbank is working overtime to help him do it.