← Monday Reads
Sunday Reads in Darkness and Truth: All for Nothing…All for Everything →

Deval Patrick Gets It Just Right on Romney’s Record 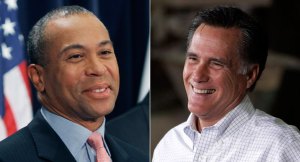 Massachusetts Governor Deval Patrick appeared on Meet the Press this morning. I haven’t seen the whole program; but from what I’ve read about it along with what Patrick has said about Mitt Romney in other interviews, I think he’s getting it just right. Here’s what he said on MTP, according to The Boston Globe:

Patrick, a co-chairman of Obama’s reelection campaign, said the presumptive Republican presidential nominee had a poor record of job growth as governor, repeating the familiar statistic that Massachusetts ranked 47th in the nation in that category when Romney was in office.

But, Patrick said, that “doesn’t mean he was a failure as governor.”

Really? What specifically did Romney do well as governor? Why he signed the nation’s first universal health care law and pushed for the individual mandate that citizens must purchase health insurance. Patrick knows full well that Romney doesn’t want to be praised for that accomplishment. Every Obama surrogate should hammering health care achievement home, again and again. Back to the Globe article:

Host David Gregory asked the governor to respond to former President Bill Clinton’s statement Thursday that “there’s no question that in terms of getting up and going to the office and basically performing the essential functions of the office, the man who has been governor and had a sterling business career crosses the qualification threshold.”

Really? What’s it about then?

The corporate media is comparing Patrick’s approach to what Cory Booker said previously on MTP. But I think they’re wrong. More Obama surrogates should follow Patrick’s lead. Sure, Bain is a terrific company and Romney deserves credit for his role in building the business. But at Bain and as governor, Romney didn’t create jobs. But, hey…he led the way to socialized medicine in Massicusetts! Isn’t that great?

Here’s an opinion piece that Patrick wrote for CNN a couple of days ago. In it he spells out a very clear argument against Romney as POTUS. Of course he leads with Romney’s failure to create jobs in the state. Everyone knows by now that Massachusetts ranked 47th among the states in job creation.

and that was in relatively good economic times. Real wages declined (while rising across the nation). Instead of helping workers and small businesses adjust to changes in the global economy, Romney cut critical work force training programs and millions in economic development funds. Instead of promoting Massachusetts to attract jobs, he used the state as a punchline on the national Republican political circuit.

When Patrick took office he had to clean up Romney’s messes.

He left behind a bureaucracy whose work force grew during his term, an unsustainable public pension system and a culture of poor accountability throughout state government.

Young people and jobs were leaving our state. Our roads and bridges were crumbling, and his Republican predecessors’ poor oversight of the infamous Big Dig project in downtown Boston resulted in billions of dollars of cost overruns, substandard workmanship and debilitating debt that he made no effort to remedy.

In the face of budget challenges, what did Romney do? He raised nearly every fee and surcharge that didn’t bear the title “tax” and cut funding for the schools. In a state where education is our calling card, Romney was responsible for the second largest per pupil cut in education funding in America during his second year in office.

Sure Romney’s a nice guy, Patrick says, and he was very successful in business. But in his only time in office Romney failed to create jobs or stimulate the economy. Why did this happen?

Romney sincerely believes that people are better off on their own: on their own to deal with their unemployment; with under-resourced public schools and no way to pay for college; with neglected infrastructure; with a job market that needs skills they didn’t have. He does not fundamentally believe that government should help people help themselves. And he has a record as governor of Massachusetts to demonstrate how much damage his leadership does to people, their families and our future.

Finally, here’s a recent interview that Patrick did with John King in which he makes similar arguments.

I think the Obama campaign should have their other surrogates emulate Deval Patrick’s approach–call it hitting Romney with a velvet glove that has a steel lining. You don’t have to yell and scream to get your message across. Patrick is calm, cool, and collected. He’s not “nauseated” by attacks on Bain or private equity, like Corey Booker. He doesn’t call Romney’s career at Bain “sterling,” like Bill Clinton did. He explains why Romney’s career at Bain is irrelevant to job creation, while his time as Governor is. And he strongly praises the one achievement Romney doesn’t want to talk about: health care reform.

I don’t know if this can all be boiled down to a 30-second sound byte, but Deval Patrick is coming pretty close with this:

The Obama campaign should keep Patrick front and center, hammering home the message that Romney knows nothing about job creation–and in fact really doesn’t care about it–but he sure deserves all the credit in the world for leading his state to universal health care.