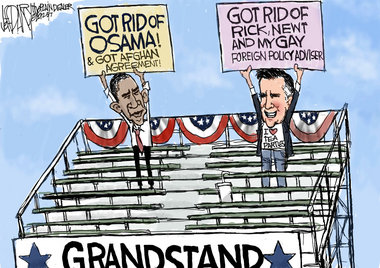 Two weeks ago, Mitt Romney former Bush administration official Richard Grenell as foreign policy spokesman for the Romney campaign. By the next day, anti-gay radio host Brian Fischer was attacking the move along with several other right wingers.

The day after Mr. Grenell was hired, Bryan Fischer, a Romney critic with the American Family Association, told nearly 1,400 followers on Twitter: “If personnel is policy, his message to the pro-family community: drop dead.” The next day, the conservative Daily Caller published an online column that summed up the anger of the Christian right, linking Mr. Grenell’s hiring to the appointment of gay judges to the New Jersey Supreme Court.

Andrea Saul, a campaign spokeswoman, issued a statement of support for Mr. Grenell on April 24. But it made no mention of the attacks on his sexuality: “We hired Ric Grenell because he was the best qualified person for the job and has extensive experience representing the U.S. Mission to the U.N.”

But at the same time Grenell was repeatedly told not to say anything publicly for the campaign. Grenell finally read the writing on the wall after he organized a major media conference call on foreign policy.

It was the biggest moment yet for Mitt Romney’s foreign policy team: a conference call last Thursday, dialed into by dozens of news outlets from around the globe, to dissect and denounce President Obama’s record on national security.

But Richard Grenell, the political strategist who helped organize the call and was specifically hired to oversee such communications, was conspicuously absent, or so everyone thought.

It turned out he was at home in Los Angeles, listening in, but stone silent and seething. A few minutes earlier, a senior Romney aide had delivered an unexpected directive, according to several people involved in the call.

“Ric,” said Alex Wong, a policy aide, “the campaign has requested that you not speak on this call.” Mr. Wong added, “It’s best to lay low for now.”

That’s when Grenell decided to step down after only two weeks. Brian Fischer celebrated on his radio talk show, calling it a “huge win.”

Yesterday, Romney was running around telling people that he had wanted Grenell to stay with the campaign; yet Romney was stone cold silent for the entire two weeks of the controversy!

Then yesterday, Fischer made fun of Romney for caving to “a yokel like me.”

Fischer: Let me ask you this question, people have raised this question, if Mitt Romney can be pushed around, intimidated, coerced, coopted by a conservative radio talk show host in Middle America, then how is he going to stand up to the Chinese? How is he going to stand up to Putin? How is he going to stand up to North Korea if he can be pushed around by a yokel like me? I don’t think Romney is realizing the doubts that this begins to raise about his leadership. I don’t think for one minute that Mitt Romney did not want this guy gone; he wanted this guy gone because there was not one word of defense, not a peep, from the Romney camp to defend him. They just went absolutely stone cold silent, they put a bag over Grenell’s head, they even asked him to organize this phone conference and they didn’t even let him speak at the conference that he organized.

The quoted part begins around 4:00, but the whole thing is pretty entertaining, especially the part where Fischer talks about Romney’s “triple etch-a-sketch” and how Romney “went Saul Alinsky on me.”