← Super Tuesday Reads
Limbaugh’s Latest Lame Excuse: Liberals Made Him Do It! →

There were few surprises in yesterday’s Russian election.  Vladimir Putin won in what he declared a ‘clean victory.’  For his side.

Arrests in Moscow--image via SkyNews

For protestors of the last few months, the White Ribbon movement, opinion was to the contrary, comments generally expressing ‘shame, disgrace, treachery.’  Yet according to official results, Putin pulled a 64% majority, well over the 50%, which would require a run-off vote.  Independent observers, however, reported widespread irregularities, insisting that Putin’s majority was perilously close to the 50% cliff.  According to one observer, Roman Udot, with Galos, a free election watchdog organization, which recorded many cases of multiple voting and voter intimidation:

“It’s one pixel away from a second round.”

What was the reaction to Putin’s victory speech?  Thousands of protestors hitting the streets in Moscow and St. Petersburg.  And combat-style police, 12,000 reported in Moscow alone, on the ready.

One of the details that piqued my interest was the fact that Putin’s support comes heavily from elderly pension holders.  Putin has been wise enough to keep the pension money flowing, even with a slight increase.  For the older generation, Putin is the Devil they know.  For the digital-savvy young?  Not so much.  The educated middle-class have reached a tipping point, disgusted with governmental fraud, corruption and political lip service to democratic principles.

This is not a new phenomenon.  Social uprisings have been springing up all over.  Currently, we’re watching Syria fall apart, desinigrating into civil war.  This is on the heels of insistent calls for change across the Middle East—Egypt, Bahrain, Yemen, Libya—the message of which spread like a virus across Europe, the UK, the United States, Japan, China and now Russia.

Say what the pundits will but just beneath our own political process, the charade of another electoral season guided and shaped by money and corporate interests, there’s a hot wind blowing.  The strident cacophony of the right wing, each member trying to outdo the other with outrageous comments or the pitiful whines of Wall St. bemoaning the decline in kingly bonuses, only underscores the obvious: the self-regulating, free market, privatize-the-world philosophy is a bust.  Fraud is as wide as our broken housing market, the Big Lie deeper than a fracking well. 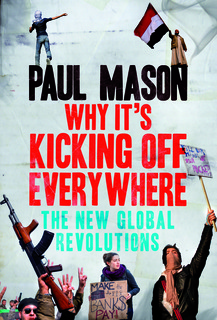 The intriguing question is what common denominators run through all these movements, despite the vast geographical/political differences?  And why, presumably, did these social/political movements catch so many pundits, experts and leaders by surprise?

These are two of the questions, Paul Mason, a UK journalist and Economics Editor for the BBC attempts to answer in his book: ‘Why It’s Kicking Off Everywhere: The New Global Revolutions.’  Mason brings on-the-ground reporting, essay-like reflections, economic insights as well as a historical perspective to what we read in the headlines, websites and tweets of last year.  And what we might expect coming at us, all of us in the coming months.  He also does an effective job of bringing the pain, the anxiety, the suffering of people caught in the jaws of poverty, austerity and political crackdowns to life. We can see it.  We can feel it and understand that we share more with the rest of the world than we have differences.  This is a shattering truth.

The ‘why’ of the Dissent that Circled the World is intricately tied to the shuddering economic principles of globalization, fueled by a neoliberal narrative, the particular type of capitalism that has been favored and defended for the last forty years and has enriched the top 1% at the expense of everyone else.  This is a system that insists markets are self-regulating, that free, unimpeded markets are the path to Paradise and privatization is always superior to public [government] direction.  It is an ideology that refuses to look at the damage caused to vast swaths of the world’s population–the liberties extinguished, the income inequality produced, the environmental destruction–the very realities which are rejected, even when the evidence is undeniable.  For instance, the global economic collapse and the implications of climate change.

Mason has reduced the drivers of the world-wide pushback to three main factors: graduates without a future, the rise and sophistication of social networks and the change in consciousness those very networks have produced, particularly as it relates to the definition of freedom and what that really means to ordinary people.  Social networks—Facebook, twitter and cell phone usage—have changed the way we see and interact with one another and have fundamentally erased barriers of class, nationality, language and geographical distances.  This is the hum of the hive and it’s growing stronger, which is why it’s regarded as a threat.

Anyone thinking the use of the word ‘threat’ is hyperbole should check the recent bill [HR 347] passed overwhelmingly in the US Congress making it a felony to participate in many of the Occupy Wall Street protests of last year.  In fact, the bill has been coined the ‘anti-Occupy bill.’  Why haven’t we heard about this?  Where is our brave press, the Fourth Estate, defending American liberty?  They claim it simply isn’t relevant—no big deal.  Interesting too–not a single Democrat voted against the bill’s passage. Not one. In fact, it’s reported that only Ron Paul and two other Republicans voted ‘nay.’  The bill’s vague language leaves the discretion regarding events of ‘national significance’ up to the discretion of the Department of Homeland Security.

Why is there a hot wind blowing?  This is why.