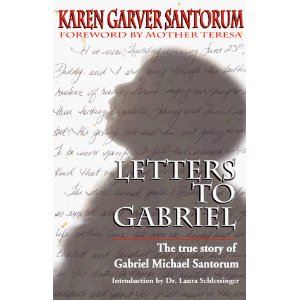 Recently, I wrote a post about Rick and Karen Santorum’s responses to their miscarriage. After this loss, Karen wrote a book called Letters to Gabriel: The True Story of Gabriel Michael Santorum. At the time, I looked up the book and it was selling cheaply on Amazon.

Some of you may know that I’ve become a bookseller, at least temporarily. Well, I should have bought a bunch of copies of Karen’s book when I had the chance. The book was published in 1998, and until recently used copies were selling for less than a dollar. Today, the cheapest price I could find was close to $100.00 on some foreign websites. New copies of the book begin at $2,5 on Amazon and nearly $900 on E-bay. This copy at Half.com was selling for $.75 plus postage just recently and is now listed at $891.00.

I don’t know who is buying the book–maybe slumming pro-choice readers or pious anti-choicers–maybe both. Since I began selling my book collection, I’ve sold a few old and scarce books for inflated prices, but never this inflated. I’m going to have to get better at foreseeing these kinds of trends!