← Late Night Funnies: You might be the 1%…
Friday Reads → 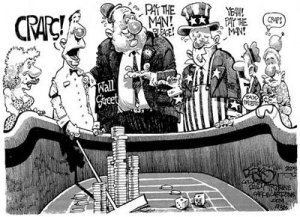 According to Greg Sargent, labor and progressive organizations are forming a coalition to “Occupy Congress.”

The coalition — which includes unions like SEIU and CWA and groups like the Center for Community Change — is currently working on a plan to bus thousands of protesters from across the country to Washington, where they will congregate around the Capitol from December 5-9, SEIU president Mary Kay Henry tells me in an interview.

“Thousands of people have signed up to come to Capitol Hill during the first week in December,” Henry says, adding that protesters are invited to make their way to Washington on their own, too. “We’re figuring out buses and transportation now.”

One idea under consideration — pending various permitting and other logistical issues — is to have a series of tents set up on the lawn outside the Capitol, each representing a state, with the number of unemployed in each state prominently displayed. But the optics are still being worked out.

The demands they are talking about aren’t very radical though. They’re planning to pressure Republicans to go along with Obama’s jobs proposal. As Sargent points out, that doesn’t really jibe with the nature of the Occupy movement, which rejects both corporate political parties. But Henry argues that

Occupy Wall Street had created a “framework” — which she described as “we are the 99 percent” — within which such activities would fit comfortably.

“The reason we’re targeting Republicans is because this is about jobs,” she said. “The Republicans’ insistence that no revenue can be put on the table is the reason we’re not creating jobs in this country. We want to draw a stark contrast between a party that wants to scapegoat immigrants, attack public workers, and protect the rich, versus a president who has been saying he wants America to get back to work and that everybody should pay their fair share.”

It’s a start, and the SEIU may not be able to control the message if lots of people with more creative ideas show up to the protests.

In line with the influence of the Occupy actions on the mainstream types, I clicked on a Google news link to the conservative Washington Times that read “Occupy Wall Street: What should be done with the protesters?” I expected to find a screed encouraging law enforcement to crush the protesters. Imagine my surprise when I read this instead:

As irritating or disruptive as some may find the Occupiers, they are the conscience of America, like it or not. Their very physical presence is a reminder that the decline of America happened not because they didn’t believe in the American dream, but because the greed of Wall Street and the banks stole that dream.

Yet our government continues to reward the top 1% with corporate welfare and the lowest taxes in more than 50 years. And Congress, which made that largesse to the wealthy possible, is in the pockets of those very same people and their lobbyists.

Yes, the protesters are predominately young, unemployed, maybe even scruffy, and, yes, the homeless have found a haven and free meals with them, and, yes, the Occupiers’ persistence after more than two months is like a mote in our eye, reminding us all that we can no longer do business as usual.

The fact that OWS sites have sprung up across the country and now the world has prompted us to face ourselves. We can no longer ignore the joblessness and poverty that scars our great country. It is not an abstract concept, some numbers on a bean counters’ balance sheet. It’s real. It’s people. It’s your kids and mine. It’s returning vets who find themselves on the scrap heap of our economy.

Holy sh&t! Can you believe it? Could it be that change is really happening?