Late Night: What is the “Legal Issue” that Shut Down Saturday Testimony in the Casey Anthony Trial? 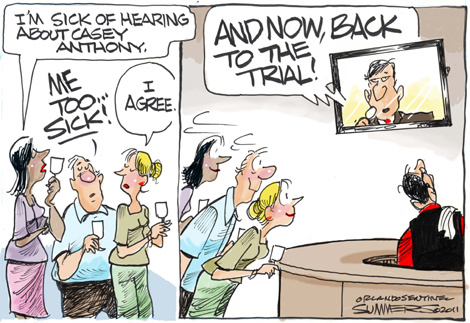 From the Orlando Sentinel:

Chief Judge Belvin Perry and the attorneys met outside the courtroom and discussed matters that are “under seal” and not part of the public record, according to a court-system spokeswoman.

Perry emerged from the conference and announced aloud in court that a “legal matter” had come up, requiring court to be recessed.

His announcement came about 9:40 a.m. on a day he had expected to hear testimony until about 3:30 p.m. Instead, Perry announced that Anthony’s trial in the 2008 death of her daughter, Caylee, will resume Monday morning.

In the absence of an explanation, speculation soared that a plea deal might be in the making or that another call for mistrial had emerged or that there might be legal issues involving testimony by Lee and Cindy Anthony — the defendant’s brother and mother.

Those are the possibilities that first occurred to me too. But I really don’t think Casey would take a plea, and the prosecution has said they wouldn’t accept one after the trial began. Since it was Cheney Mason who asked to discuss something, I also wondered if the defense wanted to claim that Lee Anthony had perjured himself, but that would normally wait till the end of the trial wouldn’t it? If it were a mistrial, wouldn’t Jose Baez have just brought it up in open court?

Of course I have no idea what the “legal issue” is, but I thought I’d share some speculations I’ve seen from “experts” and court followers around the ‘net.

Vinnie Politan of True TV and HLN tweeted yesterday that he received confirmation from Cheney Mason that it definitely isn’t a plea deal.

@VinniePolitan
NO PLEA DEAL… My pal Jean Casarez spoke with Cheney Mason to confirm! RT to end the speculation!

Hal Boedeker, the TV Guy at the Orlando Sentinel has more detail from Jean Casarez:

Here’s what Casarez reported last night: “Cheney Mason, attorney for Casey Anthony, confirms with me that ALL of the media speculation surrounding Judge Belvin Perry’s dismissal of court this morning is false. This speculation would include plea deal, mistrial, Roy Kronk’s telephone records and issues with Dr. Bill Rodriguez testifying for the defense.

…called the delay shocking. But he also cited ”an unimpeachable source” who said the legal issue “is expected to have no long-term impact on the trial, and further, it is still possible this contentious case could be wrapped up before July 4.” And Rivera added that the trial is “expected to resume Monday as if nothing happened, legally speaking. There is no harm, no foul.”

No foul except for Baez maybe leaking sealed info to his pal Geraldo….

The Christian Science Monitor brought up a possibility I hadn’t thought of. They cited an issue relating to testimony on Friday by lead detective Yuri Melich:

During testimony on Friday, Detective Melich revealed that investigators had obtained the cell phone records of Roy Kronk, the man who called police after discovering a small child’s skeletal remains in a wooded area not far from the Anthony’s home.

Melich said police obtained Mr. Kronk’s phone records from June to December 2008….That six-month date range is important for two reasons. It suggests that, at least initially, investigators suspected Kronk might be more than an innocent bystander who merely stumbled upon the gruesome scene.

Second, that date range suggested to Baez that state prosecutors had failed to turn those phone records over to him as court rules require.

Kronk is a big part of the defense case, and if the prosecution deliberately failed to turn the records over it would be a serious problem and could possibly lead to a mistrial. However, Baez has accused the prosecution of this kind of thing before and it has always turned out that he was mistaken. Still, it’s an interesting possibility.

The most intriguing speculation I found was at the blog The Hinky Meter in a comment by one of the bloggers, Valhall. He or she thinks that Cheney Mason wants out, because this trial is is “swan song,” and he’s embarrassed by all of Jose Baez’s grandstanding and underhanded tactics. Mason is the only attorney on the defense team with experience in death penalty cases. That would surely throw a wrench into the defense’s plans. Read the whole comment to get a sense of Valhall’s reasons for thinking this.

What do you other Trial followers think?

23 Comments on “Late Night: What is the “Legal Issue” that Shut Down Saturday Testimony in the Casey Anthony Trial?”