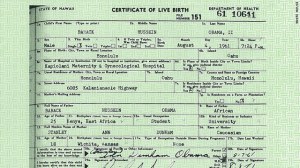 The WH has released Obama’s long form birth certificate. That link will take you directly to the WH blog.

The surprise release follows recent and sustained remarks by businessman Donald Trump, among others, that raised doubts as to whether the president was born in the United States.

Read it and weep, birthers/suckers:

As I said yesterday in The War on Legitimate Dissent, this whole birther/secret Muslim explosion has been one huge distraction… and the President has just lobbed the ultimate pie in the face of the GOP.

Speaking to reporters Wednesday, Trump said, “I have accomplished something nobody else has accomplished.”

“I want to look at it, but I hope it’s true,” he added. “He should have done it a long time ago. I am really honored to have played such a big role in hopefully getting rid of this issue.”

More from the CNN link:

The so-called “birther” debate is “good politics” but “bad for the country,” said Pfeiffer.

From the WH blog link at the beginning of this post:

The President believed the distraction over his birth certificate wasn’t good for the country. It may have been good politics and good TV, but it was bad for the American people and distracting from the many challenges we face as a country. Therefore, the President directed his counsel to review the legal authority for seeking access to the long form certificate and to request on that basis that the Hawaii State Department of Health make an exception to release a copy of his long form birth certificate. They granted that exception in part because of the tremendous volume of requests they had been getting. President Barack Obama’s long form birth certificate can be seen here (PDF):

Obama himself has spoken on the issue this morning. From the Guardian’s live blogging of Obama’s statement…

9.48am ET: Obama is now speaking at the White House.

“This isssue has been going on for two and a half years now, I think it started during the campaign,” says Obama, looking relaxed.

He says he’s been “amused and puzzled” by how long the rumours have persisted, despite many investigations and the release of the shorter version of his birth certificate. “And yet this thing just keeps on going.”

9.51am ET: “Normally, I would not comment on something like this,” says Obama. But he explains that, two weeks ago during the budget debate with Republicans in Congress, he found that the biggest news story was about his birth certificate.

(That was Trump’s fault: that was when he started raising the subject.)

9.52am ET: “We’re not going to solve our problems if we get distracted by carnival acts and sideshow barkers,” says Obama – an oblique reference to Trump, surely?

This morning is all bread and circuses, and the oligarchy scores again!

Also from the Guardian live blog… Donald Trump is a big fat liar, bringing the Clinton’s name into his birther shenanigans:

Why he didn’t do it when the Clintons asked for it, I don’t know.

That’s just a flat untruth. The Clintons never asked for Obama’s birth certificate to be published – although some suggest the origins of the birther argument came from the Clinton campaign during the 2008 primaries. Whether or not that is true, what is true is that the birthers set sail under their own wind long ago.

The only real political fight Obama has ever had was against Hillary. I’m sure the Clintons did their opposition research, but they’re both lawyers, they both endorsed him for president, and Hill became Obama’s secretary of state. The birthers took it upon themselves to demand Obama’s birth certificate past the point of any semblance of rationality. Trump just wants to bring the Clintons’ name into it because he doesn’t want to bear the egg on his face alone.

Incidentally, two other big announcements this morning, although unofficial — AP: Panetta to take over Pentagon, Petraeus picked for CIA chief.

From the link (USA Today):

CIA Director Leon Panetta will be named to succeed Robert Gates as secretary of Defense and Gen. David Petraeus will be nominated to replace him as CIA director, the Associated Press reports, quoting unidentified sources.

The AP also reports that Ryan Crocker, the seasoned diplomat who was ambassador to Iraq during the Bush administration, is the top candidate to become new ambassador to Afghanistan.

The most important aspect is this: Our campaign will be grounded in President Obama’s experience as a community organizer. This notion of ordinary people taking responsibility for the organization at the neighborhood level is not only the way to win, it’s also the way politics ought to work. Our campaign will be an example of innovation and efficiency, but it will also be an example of civic engagement at its best and most rewarding.

Isn’t that rich? Recycling the “community organizer” pitch? But, really I’m not surprised. Obama’s an excellent organizer and he is running on that indeed–it’s just that most people miss WHO it is that he is organizing for: Himself.

Obama has offered his ostensible base–the American people– nothing but crumbs, bones, and insults, while catering to his real base, the one that will help bankroll his billion dollar re-election campaign — Wall Street. Yet, as evidenced by today’s well-timed WH dumps, this WH is “fired up and ready to go” to get Obama re-elected and confident they’ve got 2012 in the bag. All this bread and circuses has served him and the oligarchy well to that end.