The Blob Lives On! 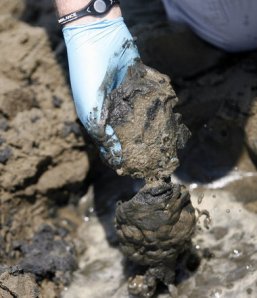 It’s been a year since the explosion of the Deepwater Horizon killed 11 people outright and destroyed an entire ecosystem. It’s the worst environmental catastrophe to ever hit the US. The US celebrates Earth Day on Friday, yet, I never hear one politician make hay over the “lessons of 4/20”.  This is because policy makers refuse to learn the lessons. They’d rather sell oil and tainted seafood than deal with the real issues of the disaster.

Most of the coastline of Louisiana is still coated with oil either right in the marshes or just below the surface. The Oyster populations are way down. Dead Dolphins and Sea Turtles are washing up onto the beaches in record numbers. Where is the outrage? Where is the move to seek justice? Where are the calls about what we’re going to leave to our children?

No one who could make this right is carrying the banner to do so. Thousands of small businesses that rely on the Gulf are still hurting and going under. Those that are hurting include people who fish, oyster, shrimp, and run services businesses that support other businesses or tourist trade. It’s an ongoing tragedy and one that’s been ignored for the most part.   The Times Picayune editorial staff and even Republican Politicians in the area who are obsessed with drilling for oil and the oil industry here aren’t shying away from pointing fingers and blame.  BP is doing the same half-assed job of cleaning up that they did of drilling on the Deepwater Horizon.  There is no justice and no peace down here on the Gulf.  Real people are dying and local economies are going under.  There has been more guffaw in Washington DC over defunding Planned Parenthood than making things right for people impacted by the BP Oil Gusher.  Just ask Congressman Markey who has tried endlessly to pass bills to make it right and hasn’t got one through yet.

The oil lurking just under the soil in the marshes of Pass a Loutre Wildlife Management Area is a testament to that. The area was thick with roseau cane a year ago, Wildlife and Fisheries Secretary Robert Barham told reporters this week. “It was a thick, luscious, green tropical marsh,” he said. Now it is “weathered, stressed, unhealthy.”

The shoreline has visibly retreated in the past year, shrinking several yards from where the water line had been marked in the days after the spill. That is discouraging to Louisianians and ought to worry all Americans, given the importance of our coastal wetlands to the creation of fish and other marine life.

The state created the Pass a Loutre Wildlife Management Area nearly 100 years ago, and it has been an important refuge for migratory birds. Now, the state is using air cannons to keep the birds away from the oily marshes.

This is just one spot on the Gulf Coast that is still suffering from the massive amount of oil that spilled from BP’s well last spring and summer.

In some locations, we are losing 5 feet of marshes and shore line a day.  Deep Horizon oil is everywhere and making things much worse.  All you have to do is talk to the people that live in the affected areas like Grand Isle or Plaquemines Parish or Barataria Bay to see and hear about oil oozing along the coastline.

The noise of the cannons, combined with the swish and flash of metallic strips flapping from poles above the cane, are designed to keep birds from settling into the oily area.

“This is the very terminal end of the Mississippi Flyway,” said Todd Baker, biology program manager for Wildlife & Fisheries. “You get a wide variety of birds, waterfowl, neotropical migrants, raptors, all of them. When they come through, this is the first piece of land they see. When they leave, this is the last place they rest up before they jump across the Gulf of Mexico.

“The hazing cannons are not foolproof,” Baker said, as a Louisiana red-winged blackbird chirped from atop a cane stalk a few yards away.

About 15 miles away as the birds fly — or 30 by boat — Graves used a shovel and his hands to dig about a foot beneath the surface of a spit of sandy beach at the end of South Pass, turning over black-stained sand that smelled like diesel.

Here’s some testimony from people whose health has been impacted by working on the clean-up.  There will probably be lots more of them in the coming months in years.

What does it say about a government that will not make right injustices done to so many people for the benefit of a profit-seeking company? What does it say that our media only shows up to report this story on anniversary days?  How do we explain to our children that we no longer have an entire lifestyle or set of animals and birds or group of human beings because oil is more important than anything?

The silence of Congress is deafening and deadly. They’ve been more concerned with gutting the EPA than learning the lessons from this deadly oilspill and its omnipresent aftermath.  Shame on them and every one else who has forgotten their fellow Americans and the country they profess to love.  This is killing people and it’s killing our land.  We should be talking about the lessons of 4/20 daily.  Instead, we’re just learning how much more Congress loves their donors than the people they are supposed to represent.  It’s a damn shame.