I’m pretty happy that the mighty mustang is parked out front and staying there for the most part.  Every time I do make it out, I nearly faint from the changes that I see in gas prices.  I thought I’d share some links with you about what’s going on.

Rising U.S. gasoline prices have damaged confidence in the country’s future and forced Americans to change their spending habits and lifestyles, a Reuters/Ipsos poll released on Wednesday found.

The proportion of people who believe the United States is on the wrong track jumped 5 points to 69 percent from March, the poll found, the highest wrong-track figure in an Ipsos poll since President Barack Obama took office in January 2009.

More than six of every 10 Americans have cut back on other expenses and reduced their driving as a result of the rising gas prices caused by tumult in North Africa and the Middle East.

“That’s all a function of gas prices. People are feeling the pinch at the pump,” said Ipsos pollster Cliff Young.

“Increased gas prices have a direct impact on the pocketbook, and there is very little lag time between rising gas prices and its effect on presidential approval and confidence,” he said.

There’s also some concerns that higher gas prices could hurt this very anemic recovery.  Gas is one of those expenditures that folks usually can’t avoid without buying a better vehicle or getting a different commute to work.  That means in the short run, high gas prices hurt people because they can’t adjust to them easily.

Gasoline prices are soaring toward $4 a gallon, a threshold that some analysts say will damage the fragile economic recovery and crimp consumer spending just as families are planning their summer vacations.

Higher prices saddle businesses with higher transportation costs, causing them to either swallow them or pass them along to already strapped customers. As gasoline costs go up, consumers are left with less money to spend elsewhere. And there is evidence that the hike at the pump is beginning to push drivers off the road.

Gasoline prices, which are approaching record levels, “are going to have a very profound effect on the economy,” said Peter Morici, an economist at the University of Maryland.

D.C. resident Amber Sutton, who drives 25 miles each way to her job in Woodbridge, said rising gasoline prices have caused her to cut back on restaurants and other entertainment.

“I already was spending a ton on gas,” she said. “But now it’s absolutely ridiculous.” 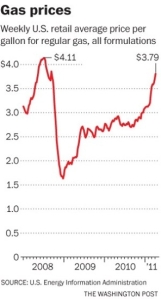 The average price for a gallon of regular gasoline Monday was $3.79 — up more than a dime from the previous week and 93 cents from a year earlier, according the Energy Information Administration. In California, the average is now $4.16, and prices are above $4 a gallon at some stations in the District and elsewhere.

Prices have risen so high, so fast that some market analysts predicted a sell-off in the short term. That sentiment sent crude oil prices tumbling Tuesday for the second consecutive day, dragging stock markets down about 1 percent, as evidence grew that escalating prices are beginning to threaten the global economic recovery.

Stephen Gandel writing for Time Magazine suggests that this price level might be the “breaking point”. This analysis uses the average amount that American consumers generally budget for gas.

Americans are spending much more than they typically do at the pump. Relatively high gas prices have made that a problem throughout this recession, but the recent increase has only made it worse. For the past 19 years, (that’s as far back as the Census data, where retail sales come from would let me go) on average Americans have spent about 8% of their overall retail purchases on gas and other gas station related items. The number has generally been around 9% this recession. And in March, for the first time since the beginning of the recession, that number hit 11%. The highest the figure has been in the past 19 years is 12% and that was in March 2008, which is when Bear Stearns collapsed and was really the start of the financial crisis. It stayed at 12% until September 2008, when Lehman went under taking the rest of the economy with it.

But even 11% could be some sort of breaking point. The last time the figure rose to 11% was in November 2007. And that is right around the time when the economy shifted from creating jobs to losing them. What’s more, in past recoveries Americans in general have spent much less of their income on gas. In 1993 and 2003, for instance, Americans spent between 7% and 8% of their purchases at gas stations.

Are high Gas and Oil prices here to stay? Yes, says The Christian Science Monitor. There are actually market factors–as well as speculation and risk from unrest–creating the momentum for higher prices.

Rising oil prices are also a result of what the Financial Times calls the “new geopolitics of oil.” The FT says three elements creating this new environment are becoming clear:

1. Young populations with high unemployment rates and a skewed distribution of income are a volatile combination for the people in power.
2. To placate these groups, oil-producing countries are increasing public expenditures.
3. Governments are also to extend energy subsidies to shelter the country’s consumers from rising energy prices.

A Deutsche Bank chart plots the share of population under the age of 30 for selected North African and Middle Eastern countries against the unemployment rate of this group. You can see that large oil producers such as Saudi Arabia have a high level of unemployment among youth populations.

This is why King Abdullah of Saudi Arabia has announced a total of $125 billion worth (27 percent of the country’s GDP) on social programs for the public. For King Abdullah, this is the cost of keeping peace but has driven up the breakeven price for Saudi oil production to $88 per barrel, according to the FT.

Keeping these young populations happy and working is not only domestically important for these governments but for global oil markets as well. You can see from this chart that a significant portion of the world’s oil production comes from the Middle East.

With the unrest in Libya—a top-20 oil producer—essentially knocking out the country’s entire production, any further unrest in another country could threaten global supply. Upcoming elections in Nigeria have the potential to disrupt production for the world’s fifteenth-largest producer.

But it’s not just geopolitics that is threatening production. Natural decline rates from mature fields such as Mexico’s Cantarell oil field are starting to make a dent in global production. Reuters reported this morning that Norway, the world’s eleventh-largest oil producer, is experiencing a significant slowdown in production from the Oseberg oil field in the North Sea. Production is expected to be cut by 26 percent in May to only 118,000 barrels per day.

Meanwhile, oil demand has been picking up significantly in both emerging and developed markets. Oil demand in China and the U.S. has been rising since mid-2009, well before the uprisings began in the Middle East.

The markets for oil are crazy at the moment.  This is especially true for the futures markets. Even Goldman Sachs is warning about speculation driving prices.

Goldman Sachs (GS) fears that speculation is causing a dangerous spike in the price of oil. In fact, the head of commodities trading at the investment bank is so worried that he advised clients this week to cash in their profits before the bubble pops, noting in a report that the sector shows “record levels of speculative longs [trading] in crude.”

This is, to put it mildly, an unusual admission from Wall Street’s preeminent casino. The official position of securities traders, hedge funds and other market players has been that speculation doesn’t affect oil prices, including prices at the pump. That’s the line the industry has taken in enlisting key lawmakers on Capitol Hill to quash rules proposed under the Dodd-Frank financial reform law aimed at curbing wild swings in the price of oil.

As Goldman makes clear, this view is implausible. Mounting evidence — and recent history — suggest that crude oil prices are increasingly determined by investors betting on which way prices are moving, rather than on economic fundamentals.

High oil prices are never good news for the US economy.  Retail sales are up for last month, but most of it was due to higher gas prices which means that fewer goods and services were bought in other sectors.   There are signs, however, that folks are cutting out on unnecessary driving.  This couldn’t bode well for any one reliant on summer vacationers.

With unrest in the Middle East and North Africa, oil prices reached a level not seen since 2008, when a summer of record-high prices helped drag the economy further into recession. As a result, gas prices are approaching $4 a gallon around the country, and signs suggest Americans are cutting back on driving — sales dropped 3 percent at most of the nation’s major gas-station chains, according to a March survey by the Oil Price Information Service.

Again, I’m fortunate to be doing all my work from my computer right now and the finance classes I will be teaching this summer are on campus which is five miles away from my front door.  Fortunately, all the MBA classes are  one night seminars so there’s not a lot of back and forth.  I’m assuming, however, that my luck on this issue is more than offset by a lot of folks who have commutes that will shortly turn into drives that create havoc on family budgets.  What’s the price of gas where you’re at?   The stations are charging about $3.70 a gallon around here.  I’m just glad I’ve got a full tank and I filled it up over a month ago.  Too bad folks can’t just scrape all that BP oil out of the marshes around here and put it directly in the tanks.