Breaking: Keith Olbermann Signs off “Countdown” for the Last Time. 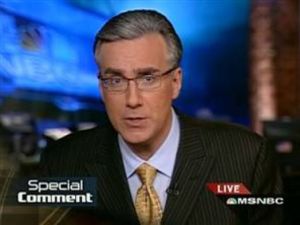 Here is the video of Olberman’s goodbye statement.

The NYT has a banner up saying “Breaking News: MSNBC Says It Has Ended Keith Olbermann’s Contract.”

That’s all I can find so far. My only guess on the reason for the termination is that it has something to do with the NBC/Comcast merger. I will update as I learn more–or anyone else can feel free to update this post.

MSNBC and Keith Olbermann have ended their contract. The last broadcast of “Countdown with Keith Olbermann” will be this evening. MSNBC thanks Keith for his integral role in MSNBC’s success and we wish him well in his future endeavors.

From the NYT Media Decoder blog:

Keith Olbermann, the highest-rated host on MSNBC, announced abruptly on the air Friday night that he is leaving the show immediately.

The host, who has had a stormy relationship with the management of the network for some time, especially since he was suspended for two days last November, came to an agreement with NBC’s corporate management late this week to settle his contract and step down.

In a closing statement on his show, Mr. Olbermann said simply that it would be the last edition of the program. He offered no explanation other than on occasion, the show had become too much for him.

According to the post, Lawrence O’Donnell’s show “The Last Word,” will replace “Countdown” at 8PM. MSNBC’s “settlement with Olbermann will keep him from moving to another network for an extended period of time.” It sounds like this was Olbermann’s idea, but if so, why announce it so suddenly?

36 Comments on “Breaking: Keith Olbermann Signs off “Countdown” for the Last Time.”