← Okay, Y’all are just Creeping me out here!!!
Bloggers Under the Bus and Over the Rainbow → 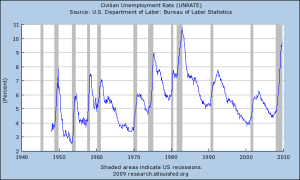 I started the big lecture in macroeconomics on unemployment with a very out of date textbook. It isn’t even that old in terms of textbook cycles. It’s just the world economy has changed; really changed. The last unemployment data I was looking at came from 2007 and a world of hurt and CHANGE (TM) stands between that year and today.

One of my students noticed that the overall pattern of unemployment (and you can see it in the FRED graph above) showed a drift up of the central tendency or mean from a lower looking central tendency in the 1950s and 1960s to a higher one in the 1970s and 1980s. I did the happy dance because I really like it when students actually notice these things. It makes my life a lot easier when I don’t have to point every little thing like that out. The deal is if you look around the 1990s it seems to drift a little downwards again before that last gray bar representing this last recession dated by the NBER. That would be our current Great Recession. Notice how the downward drift in the series could potentially have stopped and it appears there could be a slight updrift? Again, that’s in the central tendency or what you might call the mean, the median, or the mode depending on how you want to measure the statistic.

That momentum and drift around that central tendency in the unemployment series represents flows above and around what we call the Natural Rate of Unemployment. People used to set up all kinds of policy goals after the Great Depression to get to a zero unemployment rate. Actually, they did it with the Humphrey Hawkins Full Employment bill in the 1970s too because the wish was to get every one unemployed into a job. We’ve learned quite a bit more about what is and isn’t possible now.

In the 1960s, Milton Friedman and Edmund Phelps begun to study the unemployment rate carefully to see if there was any structural or natural rate of unemployment that was related to what was going on with an economy and more important, if the goal of 0% unemployment was ever going to be more than a great wish. They also wanted to study the relationship between inflation and unemployment. Well, it turns out that there is a hypothetical rate of unemployment associated with certain things going on in the economy, like inflation, recession, or a slow economic recovery. This natural rate corresponds to the best case scenario given the set of circumstances going on in the larger economy and we’ve found that the level can go up or down, depending on that set of circumstances.

That natural rate was pretty low in the 1950s and the 1960s because there were just a lot of things going on back then to keep it low. We didn’t really have a lot of competition as the world’s sole supplier at that time and the world was one great big market for our businesses. That’s sort’ve the oversimplified good news of the lower natural rate of unemployment during the Eisenhower and Kennedy years. Yes, we had some unemployment that got worse during the recessions. This is labeled cyclical unemployment!!! (Imagine that!) Fortunately, other things that can cause a lot of problems in the job market were not that big of a deal. There was lots of technology to use and lots of recent college graduates fresh from their G.I. bill funded educations to move into industry. Things were pretty hunky dory.

That changed a lot in the 1970s primarily due to the energy crisis, but also because by the 1980s, we were no longer the only industrialized nation on the planet. We had plenty of competition and we had some expensive and old technology and capital by then. That drove our natural rate of unemployment up too. Oh, that and the fact that we had lots of demographic changes like a lot of baby boomers and women coming into the job market. These factors pushed the central tendency of the unemployment rate up and along with that, we went to a higher natural rate. The 1990s were years of a lot of technology boosts and a pretty stable economy so we started drifting down again.

So, hopefully, this is enough background for you to understand the discussion among business economists about the possibility we could be back to the 1970s in terms of a higher structural or natural rate of unemployment. Okay, sit down, because this is one that will cause you to get light headed; especially if you’re worried about a job.

Economists since the mid-1990s have reckoned that full employment was equivalent to about a 5 percent unemployment rate, taking into account the time required to switch jobs. Now Nobel Prize winner Edmund Phelps and Pacific Investment Management Co. Chief Executive Officer Mohamed El-Erian say the fallout from the deepest recession in more than five decades is driving the so-called natural rate higher, perhaps to 7 percent.

“We are in the midst of a large and protracted increase in both actual unemployment and its natural rate,” said El-Erian, 51, whose Newport, California-based company manages the world’s largest bond fund. Even with the economy growing, “it will take at least a couple of years” for joblessness to fall to 7 percent from 9.7 percent now.

You read that right. Within about two years, the time for my textbook to become pretty worthless, we went from a natural rate of about 5 percent to “perhaps” 7 percent. That’s enough to make any president feel like Jimmy Carter. However, Jimmy Carter had it slightly better because he’d nearly balanced the budget by his last year in office and had some room for that infamous fiscal stimulus–tax cuts or more government spending– that Keynes prescribed to lick the bad unemployment from a very bad recession. Barrack Obama does not have that luxury.

That may keep the federal budget deficit near a record $1.6 trillion into next year and might prevent the Federal Reserve from raising interest rates in 2010, said Bruce Kasman, chief economist at New York-based JPMorgan Chase & Co., the second- largest U.S. bank. Elevated unemployment will also “dampen the recovery in consumption and economic growth,” El-Erian said.

President Barack Obama has highlighted job creation as the ultimate measure of the economy’s health, telling CNN television on Sept. 20 that it is “the single most important thing we can do.” By this measure, the U.S. is still coming up short, he added. That may hurt Obama’s Democratic Party in the November 2010 Congressional elections.

This is what you might call being between a big ol’ rock and a hard place. Once again, campaign rhetoric–like that over getting out of Iraq quickly, shutting down Guantanamo with in a year, or kicking ass in Afghanistan with out 40,000 additional tr00ps– meets the reality of facts and theory. For as much as you can talk about creating jobs with that wimpy little stimulus bill, it really doesn’t look like as many will be created as need to be. That’s because of another labor market term called permanent job destruction. It’s what makes Michigan’s unemployment nearly twice the national average. There are jobs in Detroit that simply aren’t coming back.

Kasman ties an increase in the full-employment rate to the permanent destruction of hundreds of thousands of jobs in industries from housing to finance.

Since the nadir of the last recession in November 2001, the U.S. has lost 839,000 jobs in the private sector, based on data from the Bureau of Labor Statistics — the first time that’s happened over the course of a business cycle since 1980-82. Manufacturing and construction were particularly hard hit.

Permanent layoffs — for workers who don’t expect to ever regain the same job — hit a record 53.9 percent of the unemployed in August, according to the bureau. Some 33.3 percent of the jobless had been out of work for 27 weeks or longer last month, down from a record 33.8 percent in July. And at 59.2 percent, the share of Americans who are employed is at its lowest level in 25 years.

There’s also some other factors you can read about at Bloomberg. Now Nobel Prize winning Economist Edmund Phelps thinks the Fed and other policy makers need to reconsider their estimates of what maybe possible in the near term for unemployment.

Many economists, including Gramley, don’t believe the natural rate has risen. Fed policy makers seem to be in that camp. They put the longer-run unemployment rate — a proxy for the NAIRU — at 4.8 percent to 5 percent, according to the minutes of their June 23-24 meeting.

That may be too optimistic, said Phelps, 76, a professor at Columbia University in New York who won the Nobel Prize for Economics in 2006 for his theories on the interplay between inflation expectations and employment.

“There’s a bit of whistling past the graveyard here,” he said.

They don’t call this the dismal science for nothing.

Oh, and NAIRU is another term for a different kind of structural unemployment rate. This one was Friedman’s work and it is related to taking the unemployment rate as low as you can go with out creating an inflation cycle. So cheer up, we don’t have the Jimmy Carter stagflation problem quite yet!! That’s when we had a 12% unemployment rate coupled with me paying a 16.7% rate of interest on my first fixed rate mortgage. See? Things could be worse!!! And then …we could be getting Ronald Reagan next too!!! (Unfortunately, Governor Charlie Crist already came up with that one before me but I think he thought that was good news. I guess that’s an even more dismal thought.)

4 Comments on “A Dismal Labor Market”