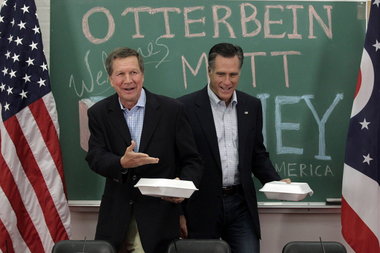 Gov. John Kasich and Mitt Romney at Otterbein U.

Yesterday, presumed Republican Presidential standard bearer Mitt Romney managed a stunning quadruple-gaffe. In one “lecture” at Ohio’s Otterbein University he demonstrated his ignorance about ordinary American families, his disdain for working people, and his cluelessness about the American economy. On top of that, he managed to put his audience to sleep! Watch the video and note the dozing students behind Romney:

Yes, Jimmy John’s! Romney’s pal Jimmy John Liautaud started a sandwich store franchise in 1983 with a $25,000 loan from his dad. Romney advised Otterbein students to do the same:

Accusing the president of attacking successful Americans, Romney urged students to borrow money from their parents — as John did — if they need to do so to succeed in starting their own businesses.

“Even now, I believe you’re watching a president who is trying to deflect and divert from his record by trying to find ways to, if you will, attack fellow Americans, between rich and poor, and other dimensions,” said Romney. “This kind of divisiveness, this attack of success, is very different than what we’ve seen in our country’s history.”

“We’ve always encouraged young people, take a shot, go for it, take a risk, get the education, borrow money if you have to from your parents, start a business,” he said.

Of course! Because everyone has parents with an extra $25,000 lying around. Why didn’t I think of that? It’s a simple answer to the economic crisis–stop attacking rich people and borrow money from your rich parents instead.

And be like Jimmy John’s–a company cited for illegal labor practices! Great idea!

The workers in question said if they called in sick and couldn’t find replacements for their shifts they risked being fired. So, they started warning Jimmy John’s customers that they could be eating sandwiches made by under-the-weather sandwich makers….

Davis Ritsema, one of the fired workers, explained how sick leave policy challenge began. “One day I was coughing and had a high temperature, but I felt pressured to work.”

Mike Wilkow, another former Jimmy John’s worker, added, “I was vomiting and handling sandwiches. They made me stay until the end of my shift.”

ROMNEY: Then there was the stimulus itself. $787 billion of borrowing. It could have been entirely focused on getting getting the private sector to buy capital equipment, for instance. That puts people to work. Or to hire people. Instead, it primary [sic] protected people in the governmental sector, which is probably the sector that should have been shrinking.

Of course, as Dr. Dakinikat has repeatedly explained, businesses aren’t going to invest capital in equipment to produce products when Americans have so little money to spend. Furthermore, Ohio college are now suffering the loss of stimulus funds, because Governor Kasich, who accompanied Romney at Otterbein, hasn’t done anything to replace them.

What’s on your mind this lovely Saturday morning?