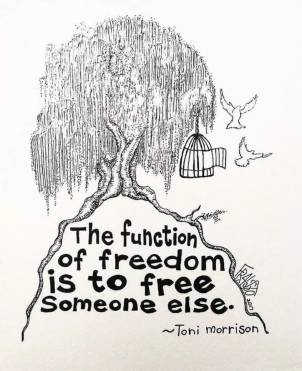 It’s fitting, then, that Juneteenth is often referred to as Jubilee Day. In January 1863, the Emancipation Proclamation abolished chattel slavery, declaring “all persons held as slaves” to be “forever free.”

Today we recognize our newest national holiday!  I’m still hoping we kick Colombus Day to the curb and replace it with one that celebrates our Indigenous peoples rather than that mass murderer that even his enablers eventually refused to pay for his horrifying time somewhere in the Caribbean.  He was an enslaver and rapist.

But today we celebrate the official end to those practices in the USA.  Today’s first read is from Teen Vogue‘s political writer Braxton Brewington.  It is also the source for the quote at the top.

Dating back millennia, the Jubilee was a momentous celebration, a year when land was to be returned, debts forgiven, and enslaved people were to be set free. Announced by the loud blast of a ram’s horn, biblical scholars note, the Jubilee year was grounded in the idea of freedom, orchestrating an economic, cultural, and moral reordering of society. It’s fitting, then, that Juneteenth is often referred to as Jubilee Day.

In January 1863, the Emancipation Proclamation abolished chattel slavery, declaring “all persons held as slaves” to be “forever free.” But it wasn’t until two years later, on June 19, 1865, that news of liberation finally reached enslaved people in Galveston, Texas. Juneteenth, sometimes called Black Independence Day or Freedom Day, honors this actual ending of slavery.

In a way, the Emancipation Proclamation functioned as Black Americans’ first and only Jubilee — in fact, “Jubilee” is what formerly enslaved people called the phase that followed the Civil War. Abolition put an end to an entire economy of exploited labor that essentially built the modern capitalist world. But the Emancipation Proclamation went further than requiring Confederate states to simply recognize slavery’s abolition — it also instructed the United States government to “maintain” the freedom of formerly enslaved people, and to do “no act or acts to repress such persons” or any “efforts they may make for their actual freedom.” Today, in a stark deviation from President Abraham Lincoln’s instructions, the government is still sanctioning and facilitating the oppression of Black people.

1864 illustration of croowds of people, recently freed from enslavement, carrying the Emancipation Declaration

Last June, President Biden made Juneteenth a federal holiday, proclaiming it as a day for all Americans to commemorate the end of slavery.

One year later, only 24 states and the District of Columbia have passed legislation or issued executive orders that would provide funding to let state employees observe the day as a paid state holiday, according to the Pew Research Center, which describes itself as “a nonpartisan fact tank.”

Opponents of bills that would create funding for the permanent holiday have complained of the costs associated with giving workers another paid day off. Some have said that not enough people know about the holiday to make the effort worthwhile.

For supporters, such arguments are painful to hear, especially as more Americans said they were familiar with Juneteenth. In June 2022, nearly 60 percent of Americans said they knew about the holiday, compared with 37 percent in May 2021, according to a Gallup poll.

“This is something that Black folk deserve and it was like we had to almost prove ourselves to get them to agree,” said Anthony Nolan, a state representative in Connecticut, where legislators argued for hours earlier this year before passing legislation to fund the holiday.

Juneteenth commemorates the events of June 19, 1865, when Gordon Granger, a Union general, arrived in Galveston, Texas, to inform enslaved African Americans of their freedom after the Civil War had ended.

The day has been commemorated by Black Americans since the late 1800s. Though all 50 states have recognized Juneteenth by enacting some kind of proclamation celebrating it, its full adoption as an American holiday has yet to take root.

You can read about Republican resistance to the holiday in the rest of the article. It’s disgusting as expected.

Juneteenth is a day of power—a chance to celebrate our history and our triumphs, our resilience and our struggle.

A group of formerly enslaved peoples gather at a county almshouse around 1900.

It would be nice to think the traditional application of American Freedom, Justice, and Liberty for all was at the center of our attention rather than the white nationalist paranoia that is driving what’s left of the Republican Party.

A Republican member of the congressional committee investigating the January 6 attack on the Capitol said on Sunday that he believes Donald Trump’s actions surrounding the deadly riots amount to “seditious conspiracy” and “criminal involvement by a president”.

Illinois congressman Adam Kinzinger’s remarks on ABC’s This Week came after three hearings held by the House January 6 committee presented searing testimony and mounting evidence about Trump’s central role in a complex plot to overturn his defeat at the hands of Joe Biden in the 2020 presidential election.

While he was only one of at least four committee members scheduled to appear on the national news network’s Sunday talkshows, Kinzinger’s comments stood out for their candor and because they came from within the ex-president’s own political party.

“I certainly think the president is guilty of knowing what he did, seditious conspiracy, being involved in … pressuring the [justice department], vice-president [Mike Pence], et cetera,” Kinzinger said. “Obviously, you know, we’re not a criminal charges committee, so I want to be careful in specifically using that language, but I think what we’re presenting before the American people certainly would rise to a level of criminal involvement by a president.”

Kinzinger also said that Trump’s actions, as portrayed by the committee, show he “definitely” failed to maintain his oath to uphold the US constitution.

“The oath has to matter here,” Kinzinger said. “Your personal demand to stand for the constitution has to matter.”

Texas Republicans declare Biden election illegitimate, despite evidence https://t.co/SgU62UCRyS Are they just STUPID or what? The Texas #GOP is the party of treason. #January6thHearings #VoteBlueToSaveDemocracy

What Juneteenth Means to Me: a Photo Essay
The BU community’s reflections on the holiday’s significance: “Juneteenth, for me… is equal parts celebration and remembrance”

It’s still rather amazing to me that we have a slice of our country that deliberately remains ignorant of the facts. Texas was, of course, the last place in the country that held enslaved people after the proclamation. Its existence was basically another example of white men grabbing land from other countries.  This is dangerous and it’s leading to dangerous situations in Republican-held state governments. This is via Reuters. It also demonstrates how clearly they believe their religious views should dictate the lives of others.

Republicans in Texas formally rejected President Joe Biden’s election in 2020 as illegitimate and voted in a state-wide convention that wrapped up this weekend on a party platform that calls homosexuality an “abnormal lifestyle choice.”

The party’s embrace of unfounded electoral fraud allegations in a bedrock Republican state came as a bipartisan congressional committee seeks to definitively and publicly debunk the false idea that Biden did not win the election.

The congressional committee investigating the Jan. 6, 2021 attack on the U.S. Capitol is building a case that Trump’s efforts to overturn his defeat in the 2020 presidential election — including by denying he lost — amounted to conspiracy to illegally hold onto power.

Trump, the 45th U.S. president, has denied any wrongdoing.

“We reject the certified results of the 2020 presidential election, and we hold that acting President Joseph Robinette Biden Jr. was not legitimately elected by the people of the United States,” the Texas party said in a resolution, passed in a voice vote at its convention.

Texas is a major player in U.S. national politics, with 38 electoral votes, the second highest after California. Voters there have backed Republican presidents for the past four decades.

Congressman Kinzinger also had this to say via HuffPo. “Adam Kinzinger Warns Next Presidential Election ‘Is Going To Be A Mess’.   “Wake up, Republicans, because this is not going to be good for you if you think it is,” Kinzinger said.” This is reported by Marita Vlachou.

Rep. Adam Kinzinger (R-Ill.) said Sunday he is “very worried” about the next presidential election, warning that 2024 “is going to be a mess,” citing a recent example of voting conspiracy theories taking hold.

Speaking to ABC’s “This Week,” Kinzinger mentioned New Mexico, where a GOP-led county’s governing commission refused to certify the local election results because of unsubstantiated concerns over voting machines before a judge stepped in.

The case echoes voting conspiracy theories in the 2020 election when right-wing personalities and networks accused voting software companies of using technology to skew the election in favor of Joe Biden.

“This is the untold thing. We focused so much on what goes on in D.C. and Congress and the Senate,” Kinzinger said. “But when you have these election judges that are going to people that don’t believe basically in democracy, authoritarians, 2024 is going to be a mess.”

“And wake up, America. Wake up, Republicans, because this is not going to be good for you if you think it is,” Kinzinger continued.

The House committee investigating the Jan. 6, 2021, insurrection has reportedly argued over whether to refer Trump to the Department of Justice for criminal charges over his efforts in overturning the results of the 2020 election.

The next public hearing will be tomorrow.  It will center on Trump’s interference in state elections including Georgia.

Two top Georgia election officials will appear Tuesday at the next hearing of the House committee investigating the January 6th attack on the Capitol.

Their appearances underscore the outsized role Georgia has played in these public hearings: https://t.co/z6vLmsggbt