Monday Reads: Presidential Pets and our first shelter dog in the White House

The Clinton’s Cat Socks hogs the spotlight on the lawn of the White House.

I’ve always enjoyed watching the interaction between our Presidents and their Pets!  Their interactions with pets and kids really tells a lot about who they are and if they’re capable of being empathetic and kind.  The first rescue pet was LBJ’s Yuki and I remember those antics well! The first shelter rescue dog in the White House will be the Biden’s German Shepard mix Major.  “‘Major’ day: Biden’s German shepherd Major to become first rescue dog in the White House.”

The Bidens adopted Major in 2018 from the Delaware Humane Association after fostering the German shepherd.

Major joins Champ, the Bidens’ other German shepherd, in accompanying the incoming first family. Presidential pets are a tradition in the White House. 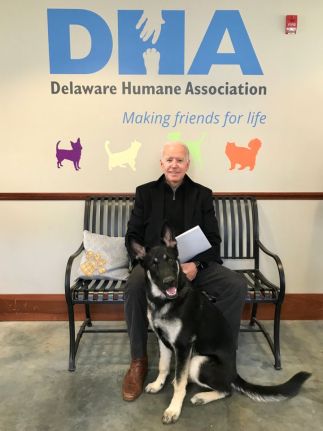 So, sue me, I think the relationship between presidents and their pets and the kids in the country just speaks volumes about character.  I look forward to seeing a lot of both Champ and Major who are the Biden Family pets.  It will also be nice to have grandchildren romping about the gardens again.  We will undoubtedly get more normal views of both families and holidays.  I cannot imagine Dr. Biden talking about having to do fucking Christmas stuff. Although I’m waiting to see what happens in the Second Family’s resident with our new second Gentleman!  Can you imagine we’re actually going to have four years of normal sane people capable of being kind and empathetic?  I’ve missed that so much! Although, poor Baron does seem more of Melania’s pet at times whenever we get proof of life from them.

Meanwhile, the Freak-in-Chief still intends to file frivolous lawsuits, have huge covid-19 super spreader events, and raise money.  This is from Axios and the keyboard of Alyana Treene.

President Trump plans to brandish obituaries of people who supposedly voted but are dead — plus hold campaign-style rallies — in an effort to prolong his fight against apparent insurmountable election results, four Trump advisers told me during a conference call this afternoon.

What we’re hearing: Obits for those who cast ballots are part of the “specific pieces of evidence” aimed at bolstering the Trump team’s so-far unsupported claims of widespread voter fraud and corruption that they say led to Joe Biden’s victory.

What’s next: Team Trump is ready to announce specific recount teams in key states, and it plans to hold a series of Trump rallies focused on the litigation.

“We want to make sure we have an adequate supply of manpower on the ground for man-to-man combat,” one adviser said.

The group is also staffing a campaign-style media operation.

Trump’s team claims there is “no daylight” between them and the White House — chiefly senior adviser Jared Kushner and current Chief of Staff Mark Meadows.

The Washington Post has an article today listing all the GOP and Trump allegations of voter fraud and irregularities.  All of them to date are unsubstantiated.  How much time and money will we be spending on this snipe hunt?

Republicans have made claims of election irregularities in five states where President-elect Joe Biden leads in the vote count, alleging in lawsuits and public statements that election officials did not follow proper procedures while counting ballots in Tuesday’s election.

Since Election Day, President Trump has repeatedly claimed that a broad conspiracy of misdeeds — apparently committed in both Republican and Democratic states — had cost him the election.

“I WON THE ELECTION, GOT 71,000,000 LEGAL VOTES,” Trump tweeted on Saturday, after returning to the White House from his Virginia golf course. “BAD THINGS HAPPENED WHICH OUR OBSERVERS WERE NOT ALLOWED TO SEE.” Trump’s campaign has encouraged donors to contribute to a legal-defense fund so he can fight the cases in court.

I personally believe the biggest share of what’s going on here beside saving Trump from reality is the bottom line indicating it’s just another grift.

I rather feel any self respecting dog would run away from Melania and Orangecheetolini.  A cat would likely find a hidey hole and stay there.

Joe Biden announced his Covid-19 Pandemic team today and Pfizer believes it has trials to show its vaccine is working for 90% of it’s trial patients.!  They’re applying for “Emergency Use Authorization from the FDA as soon as final data meets safety milestones, which it expects to happen in the third week of November.”  This is from CBS.

“Today is a great day for science and humanity. The first set of results from our Phase 3 COVID-19 vaccine trial provides the initial evidence of our vaccine’s ability to prevent COVID-19,” Dr. Albert Bourla, Pfizer Chairman and CEO, said in a statement.

“We are reaching this critical milestone in our vaccine development program at a time when the world needs it most with infection rates setting new records, hospitals nearing over-capacity and economies struggling to reopen. With today’s news, we are a significant step closer to providing people around the world with a much-needed breakthrough to help bring an end to this global health crisis,” he continued.

UPDATE: We are proud to announce, along with @BioNTech_Group, that our mRNA-based #vaccine candidate has, at an interim analysis, demonstrated initial evidence of efficacy against #COVID19 in participants without prior evidence of SARS-CoV-2 infection.

Here is the announcement of the Presidential Elect Biden’s Task Force from Axios. It specifically lists the participants and their credentials.  It’s considered a crisis team. 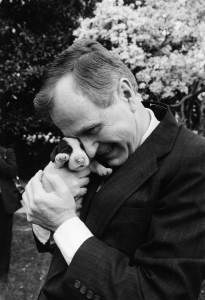 President George H.W. Bush holds one of first dog Millie’s six puppies for the press at the White House in Washington on Mar. 29, 1989. Millie gave birth on March 27, 1989 with First Lady Barbara Bush serving as midwife according to spokeswomen.

Politico reminds us that this winter will be tough as the Virus could overwhelm our healthcare system.

The country’s health care system is already buckling under the load of the resurgent outbreak that’s approaching 10 million cases nationwide. The number of Americans hospitalized with Covid-19 has spiked to 56,000, up from 33,000 one month ago. In many areas of the country, shortages of ICU beds and staff are leaving patients piled up in emergency rooms. And nearly 1,100 people died on Saturday alone, according to the Covid Tracking Project.

“That’s three jetliners full of people crashing and dying,” said David Eisenman, director of the UCLA Center for Public Health and Disasters. “And we will do that every day and then it will get more and more.”

The University of Washington’s Institute for Health Metrics and Evaluation predicts 370,000 Americans will be dead by Inauguration Day, exactly one year after the first U.S. case of Covid-19 was reported. Nearly 238,000 have already died.

Shahpar said that even before Biden takes control of government in January, he and his team can make a difference by breaking with Trump’s declarations that the virus is “going away,” communicating the severity of the virus’ spread and encouraging people to take precautions as winter approaches. 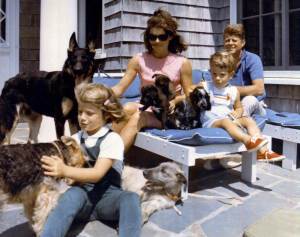 First Lady and President Kennedy enjoy a veritable pack of pooches while vacationing with their children. JFK owned many pets in during his presidency including ponies, dogs, parakeets, and a rabbit.

So, if you’re interested in learning more about First Pets you can check out this NBC page “First Pets: Dogs, Cats and a Raccoon Among Past Presidential Best Friends”.  You can see Taft’s cow who was tasked with putting fresh milk and butter on the table.   Grace Coolidge–pictured above–also had a racoon.  Hoover had an Opossum!

There are also pictures of  Nixon’s Dog Checkers and FDR’s dog Fala. Both of these dogs became famous during presidential elections and speeches.  So far, Champ and Major have avoided the wrath of the Orange one.

Then there’s the story of Romney and the dog in a cage on top of the car!!!  The photo of the poor dog kicked off a Dogs Against Romney Campaign!

But, eventually we will have a team in the White House and big in the Departments that do the work of all of us putting things back together.  I woke up the last few days thinking how relieved I will be that the future of our children will not be impacted by Betsy DeVos.  Our Public lands and sacred sites in our National Park System will once again be protected and cherished for future generations.  I’d kind’ve like to think all those pets of Teddy Roosevelt would be happy about that.

Dogs were an important part of Teddy Roosevelt’s existence, and he made room for numerous ones. There was Rollo, a friendly St. Bernard, Sailor Boy, a Chesapeake retriever, and Manchu, a black Pekingese given to daughter Alice by the last empress of China.

Blackjack, a Manchester terrier, was terrified of the family cat, Tom Quartz. Whenever the dog was near, the cat took great pleasure in chasing him away.

Pete, a bull terrier, would happily have stayed at the White House, but he was finally exiled to Sagamore Hill, the family’s country house on Long Island. Pete had a propensity for nipping at the heels of White House visitors. He took his final nip from the French ambassador, ripping the fellow’s pants. With that, he was banned from Washington by the president. Pete found that living with the staff at Sagamore Hill was just fine.

So, pretty soon, Champ and Major will start living their dog’s lives in the White House.

What a relief!  I’m sleeping better, are you?

34 Comments on “Monday Reads: Presidential Pets and our first shelter dog in the White House”