There are some important Supreme Court Decisions  that were announced today worth celebrating.  We’ve finally got some good news while heading to Independence Day 2020.  I was beginning to wonder if the birthday of our democracy/republic would be truly meaningful this year but it appears it still could be. Protestors of racial injustice have shown us our First Amendment is still alive.

This news comes the same day as the results of a new Gallup Poll show “U.S. National Pride Falls to Record Low”.

American pride has continued its downward trajectory reaching the lowest point in the two decades of Gallup measurement. The new low comes at a time when the U.S. faces public health and economic crises brought on by the coronavirus pandemic and civil unrest following the death of George Floyd in police custody.

Although a majority of adults in the U.S. still say they are “extremely proud” (42%) or “very proud” (21%) to be American, both readings are the lowest they have been since Gallup’s initial measurement in 2001.

These latest data are from a May 28-June 4 poll, which also found 20% of Americans are satisfied with the way things are going in the U.S., and presidential approval fell back to 39%. The poll’s field period encompassed the arrests of the police officers charged in Floyd’s death as well as the nationwide protests that were sparked by the incident and President Donald Trump’s controversial responses to them.

And now for the Decisions:

BREAKING: In historic decision, Supreme Court rules Title VII of the Civil Rights Act of 1964, which prohibits discrimination on the basis of sex, also applies to gay or transgender people. https://t.co/BWFvpcqQuo

The Supreme Court issued its opinion Monday on a historic case about LGBT employment discrimination, with the majority deciding that Title VII of the Civil Rights Act of 1964, which prohibits discrimination on the basis of sex, also applies to gay or transgender people.

“In Title VII, Congress adopted broad language making it illegal for an employer to rely on an employee’s sex when deciding to fire that employee,” Justice Neil Gorsuch wrote in the majority opinion. “We do not hesitate to recognize today a necessary consequence of that legislative choice: An employer who fires an individual merely for being gay or transgender defies the law.”

It was a 6-3 decision, with Chief Justice John Roberts and Gorsuch joining the more liberal side of the court — Justices Ruth Bader Ginsburg, Sonia Sotomayor, Elena Kagan and Stephen Breyer.

Takiyah Thompson says she is taking responsibility for climbing on a ladder, putting a rope around a Confederate statue outside the old Durham County Courthouse and helping tear it down.

Yes, Joe Biden, this too is a big fucking deal.  Here is some analysis via Politico:  “Supreme Court finds federal law bars LGBT discrimination in workplace”.

Writing for the court’s majority, Gorsuch accepted arguments that the Civil Rights Act of 1964’s prohibition on sex discrimination in employment also effectively banned bias based on sexual orientation or gender identity, even though few if any members of Congress thought they were doing that at the time.

“Those who adopted the Civil Rights Act might not have anticipated their work would lead to this particular result. Likely, they weren’t thinking about many of the Act’s consequences that have become apparent over the years, including its prohibition against discrimination on the basis of motherhood or its ban on the sexual harassment of male employees,” Gorsuch wrote.

“But the limits of the drafters’ imagination supply no reason to ignore the law’s demands,” he continued. “When the express terms of a statute give us one answer and extratextual considerations suggest another, it’s no contest. Only the written word is the law, and all persons are entitled to its benefit.”

LGBT activists were thought to face an uphill battle at the high court because Congress has spent more than four decades considering, but failing to pass, measures intended to expand the coverage of the 1964 law by explicitly adding sexual orientation to the list of protected traits.

Additionally, we have this one:

JUST IN: US Supreme Court says it will not take up a legal battle over whether local governments can declare themselves sanctuaries and refuse to help federal agents enforce immigration laws. https://t.co/0GygHrr4h8

The U.S. Supreme Court said Monday it will not take up a legal battle over whether local governments can declare themselves sanctuaries and refuse to help federal agents enforce immigration laws.

As is the usual custom, the court declined to say why it won’t hear the issue. Two of the court’s most conservative justices, Clarence Thomas and Samuel Alito, said they would have voted to hear the case.

The Trump administration asked the court to hear its appeal of lower court rulings that upheld a California law related to immigration. It bars police departments and sheriff’s offices from notifying federal agents when immigrants are about to be released after serving sentences for local crimes. 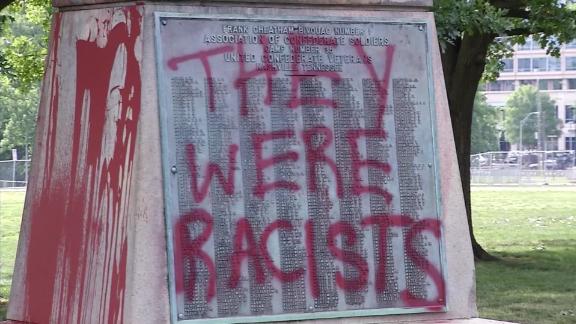 And Wait!!!! ONE more!!!!!  From WAPO: “Supreme Court passes up challenges from gun groups on laws they say violate Second Amendment”.  It’s a bad day to be a radical right wing reactionary which includes our AG, the Faux POTUS, and more than a couple of those SCOTUS judges.

The Supreme Court on Monday declined to take up new cases for next term that gun rights groups claimed denied Second Amendment rights.

The court did not accept a batch of nearly a dozen cases that gun groups had hoped the court, fortified with more conservative members, might consider. Among them were cases involving restrictions in Maryland and New Jersey to permits for carrying a handgun outside the home.

The court earlier this term had dismissed a challenge from New York about transporting guns, and three justices objected, with the newest, Justice Brett M. Kavanaugh, adding that it seemed likely lower courts have been too quick to uphold state and local gun control measures.

Liberty Monument in New Orleans deface before its final removal.

And yes, Drunky MacDrunkFace is the worst thing on the court right now.  So, the major focus beyond this next birthday of the signing of our Declaration of Independence is our voting the Orange Abomination out of office.  We have to be especially vigilant.

From Marc Elias at Democracy Docket:  “Republicans are Planning a Bigger, Much More Aggressive, Much Better-Funded Voter Suppression Program in 2020”.

Imagine having $20 million and using it to oppose voting rights. That is what the Republican National Committee (RNC) and Trump campaign announced they will do in response to voting rights lawsuits my firm and I filed on behalf of the Democratic Party and progressive groups such as Priorities USA. While normally candidates and parties insist that high voter turnout is good for them, the Republicans are bypassing that fiction and going all-in to shrink, rather than expand, the electorate. Already, signs point to a massive Republican effort to prevent voters of color and young voters from voting in 2020.

A Trump political advisor in Wisconsin was recently caught on tape bragging about the fact that “traditionally it’s always been Republicans suppressing votes in places” and advising Republicans to “start playing offense a little bit.” He alerted: “That’s what you’re going to see in 2020. It’s going to be a much bigger program, a much more aggressive program, a much better-funded program.”

Republicans are planning a “bigger,” “more aggressive,” and “much better-funded program,” because this November will be the first presidential election since 1980 that the RNC will be unencumbered by a court monitored consent decree prohibiting gross forms of voter suppression. Though voter suppression runs deep in the Republican Party, without this consent decree, the RNC can “start playing offense” and operationalize voter suppression like we haven’t seen in 40 years.

The clusterfuck primaries of Georgia and Wisconsin are only the beginning.

Anyway, it continues to be a year of shock and awe.