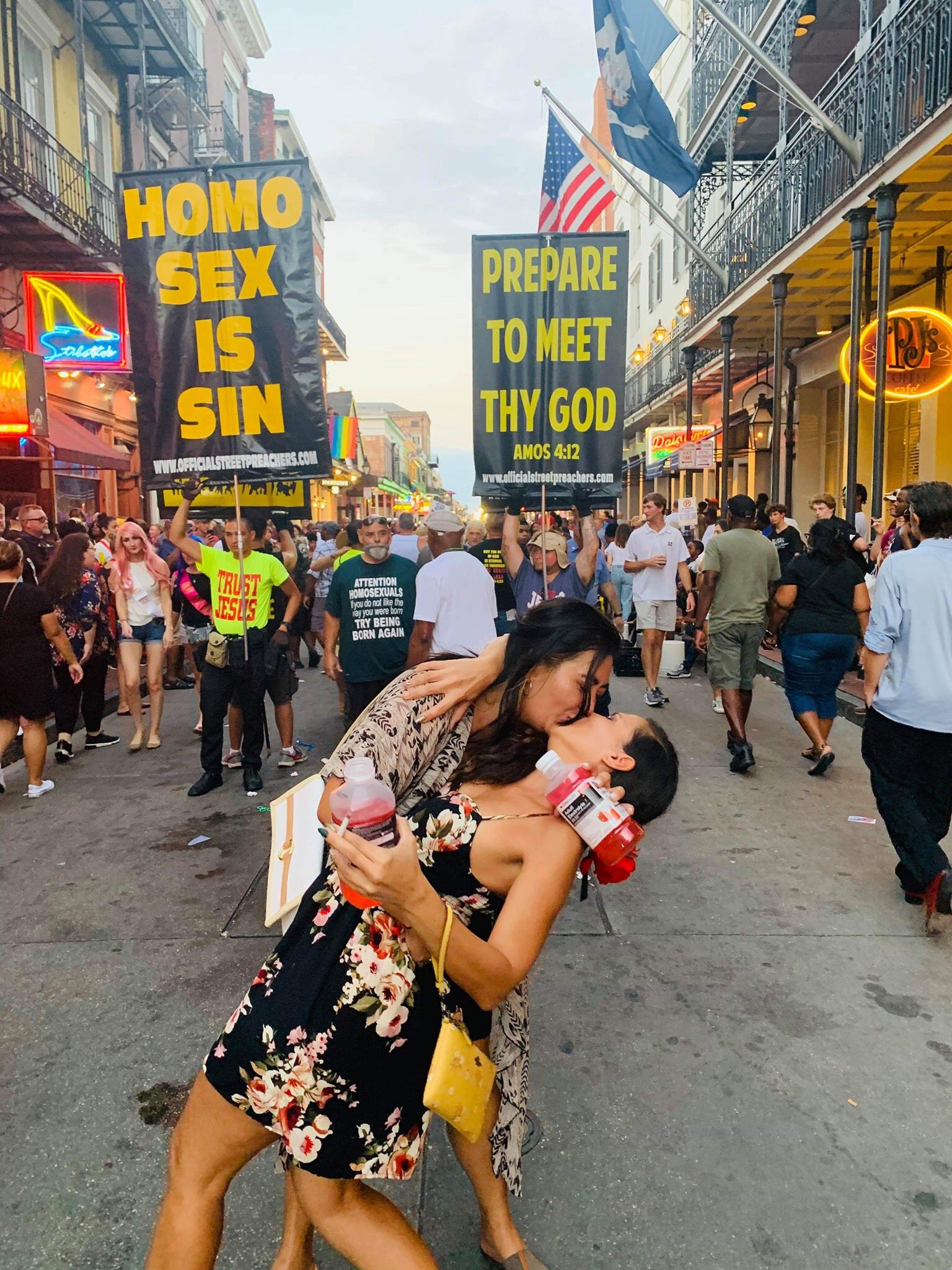 Down here in New Orleans we’re celebrating Southern Decadence!!  It’s a very big party with a lot of everything where every one has fun while being yelled at by the usual crowd of angry, bitter judgy white men.

Meanwhile, the some times occupier of the White House is playing golf at his Virginia club all on the Tax Payer’s Dime.  And, a million US citizens are facing evacuation for the monster hurricane Dorian.  This is from the Weather Channel.  I can only imagine the hell that is pounding the northernmost Bahamas today.

Dorian’s forward speed has slowed to a virtual stall.

Unfortunately, that means the northwest Bahamas, in particular Grand Bahama Island, are taking an extended pummeling.

Wind gusts of up to 200 mph are possible on Grand Bahama Island, including Freeport, according to the National Hurricane Center, along with life-threatening storm surge. Bahamas Press reported Grand Bahama International Airport in Freeport was under 5 feet of water early Monday morning.

Squalls from the outer periphery of Dorian have also reached the southern Florida Peninsula. A wind gust to 47 mph was reported at Juno Beach, Florida, early Monday morning.

A hurricane warning remains in effect for Grand Bahama and the Abacos Islands in the northwestern Bahamas, including Freeport, Grand Bahama.

Hurricane warnings mean that hurricane-force winds (74-plus mph) are expected somewhere within the warning area, generally within 36 hours. Preparations to protect life and property should be rushed to completion.

Storm surge warnings mean there is a danger of life-threatening inundation, from rising water moving inland from the coastline, within the watch area during the next 36 hours. If you live in an area prone to storm surge, be sure to follow the advice of local officials if evacuations are ordered.

President Trump has arrived at his golf club in Sterling, Virginia.

It’s the 227th day of his presidency that Trump has spent at one of his golf clubs, and the 289th day that he’s spent at a Trump property.

It’s hard to imagine what a storm of this size has down, can do, and will do.  ABC already reports the hurricane has brought ‘historic’ destruction to the Bahamas which is described as it “laying waster” to the nation of a chain of low lying islands. The other provided description is “pure hell”.

Winds are currently blowing at a sustained 165 MPH — the same strength that Hurricane Andrew had when it hit parts of the Miami metro area in 1992.

The eye of the storm made a second landfall at 2 p.m. on the island near Marsh Harbour, and a third landfall an hour before midnight on the eastern end of Grand Bahama Island.

Francis Charles, who rode out the storm in Hope Town, Elbow Cay, called the island “a wreck” late Sunday.

“I have never seen anything like this in my life,” Jenise Fernandez, reporter with Miami ABC affiliate WPLG, told the station during their broadcast.

ABC News correspondent Marcus Moore, who is on the ground in Marsh Harbour, described the scene as “pure hell.”

“I have seen utter devastation here in Marsh Harbour. We are surrounded by water with no way out,” Moore said. “Absolute devastation, there really are no words it is pure hell here on Marsh Harbour on Avoca Island in the northern part of the Bahamas.”

🌈 @JeffGoldblum is an absolute fan of this parade at @DecadenceNOLA.
❤️🧡💛💚💙 pic.twitter.com/SUIBXZyaRe

A local doctor commissioned a statue to recognize and celebrate the role of Latino Workers in helping the city of New orleans recover from Hurricane Katrina and the failure of the levees 14 years ago.

Hurricane Katrina wreaked havoc on New Orleans and other parts of Louisiana. The 2005 storm was one of the deadliest, and in the aftermath, Black and brown communities felt abandoned by the US government. One of the things we saw as a result of the hurricane was many Latinos who arrived in the city to help rebuilt. Unfortunately, it meant workers cramming into small living spaces and because of the Bush Administration, it also meant they weren’t always paid at the minimum federal rate. All the while, their contributions went largely ignored. On Saturday, a new statue in New Orleans honored the workers, most of whom are Latino and Latin American, for their work.

A local doctor commissioned the statue, made of bronze and marble, but it’s clear that the Crescent Park monument means something to many others. Council member Helen Moreno told 4WWL, “We watched the destruction that happened because of the storm, and we wondered, ‘how in the world are we ever gonna come back?’ But thanks to so many people who came and helped us and the influx of Latino workers that we had in our city, we were able to come back, and not only New Orleans, but surrounding parishes as well.”

On #LaborDay we remember the many American workers — past and present — who built this country.

Today, we recognize the collective efforts of these Americans as we enjoy the fruit of their labor. pic.twitter.com/TdNgrAudIY

We have also lost the sense of solidarity that originally inspired Labor Day. Greenhouse recounts a conversation with his then-86-year-old mother when he was in Wisconsin covering Republican then-Gov. Scott Walker’s offensive to gut collective bargaining and cut public employee benefits.

How did we get to this point? In another must-read book for our moment, “The Economists’ Hour: False Prophets, Free Markets, and the Fracture of Society,” Binyamin Appelbaum argues that the growing role of professional economists since the late 1960s fundamentally altered popular understandings about how the world should work.

We have moved, Appelbaum argues, from a healthy respect for what markets can accomplish in their proper sphere to a “single-minded embrace of markets” that “has come at the expense of economic equality, of the health of liberal democracy, and of future generations.”

Appelbaum, who writes about economics and business for the New York Times editorial page, values what economists do, but the ones he respects most are those who understand the limits of a purely material understanding of what matters. He quotes the brilliant Amartya Sen: “Economic growth cannot sensibly be treated as an end in itself. Development has to be more concerned with enhancing the lives we lead and the freedoms we enjoy.”

So, that’s it from me today.  The very thought and sight of that Hurricane has me quite triggered so I’m staying home with the TV off as much as possible.