← Wednesday Hump Reads: For Those On the Verge
Monday Reads: In Other News →

Tuesday Reads: It’s Hillary vs. the GOP, the Media, the FBI, and the Russians 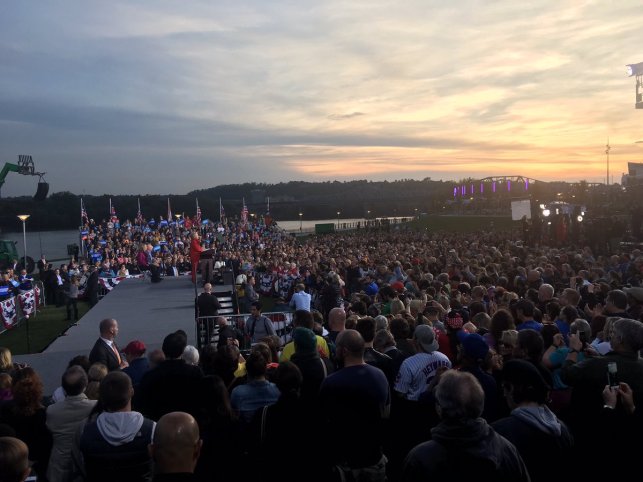 What an unbelievable news day we had yesterday! And what an amazing month in politics October was! The last time I can recall daily shocks like this over such a sustained period was during the Watergate scandal.

Yesterday, it appeared that supporters of James Comey in the FBI–or maybe Comey himself were leaking to The New York Times in an effort to rehabilitate the now-compromised FBI director. As former Justice Department spokesman Matthew Miller wrote on Twitter:

There's a difference between leaks and waterfalls. https://t.co/IRSh5f3NF8

Yes, it was a waterfall, a flood, a deluge. And of course The New York Times lapped it up, just as they did the lies from the Bush/Cheney administration in the lead-up to the Iraq War.

For much of the summer, the F.B.I. pursued a widening investigation into a Russian role in the American presidential campaign. Agents scrutinized advisers close to Donald J. Trump, looked for financial connections with the paydayloansnow.co.uk figures, searched for those involved in hacking the computers of Democrats, and even chased a lead — which they ultimately came to doubt — about a possible secret channel of email communication from the Trump Organization to a Russian bank.

Law enforcement officials say that none of the investigations so far have found any conclusive or direct link between Mr. Trump and the Russian government. And even the hacking into Democratic emails, F.B.I. and intelligence officials now believe, was aimed at disrupting the presidential election rather than electing Mr. Trump.

Emphasis added. The authors don’t bother to explain why the Russians have only targeted Democratic groups and the Democratic presidential candidate if they don’t aim to help the other. Because that’s obviously what they did. You can go read the rest of that bullshit article if you want, but it sure looks like it was dictated by James Comey for the purpose of covering his ass.

The New York Times can suck up to Comey all they want. Plenty of other–even some Republicans–are worried about Russia supporting Trump, even if the FBI isn’t.

If a domestic intelligence agency won’t protect the integrity of elections against foreign manipulation lest it look partisan, who needs it?

Possible the Russians hacked candidates in alphabetical order but their hacking budget ran out of money before they got to Trump. https://t.co/PgVwwYtn31

If Kremlin only wants to disrupt US election, not elect Trump, why isn't his campaign getting hacked? https://t.co/Ygprnthvgy

Okay, maybe I can buy that the story about a direct email link between the Trump organization and a Russian bank could be wrong; but I’ll hold off on making a decision on that yet. But what about this story by David Corn: A Veteran Spy Has Given the FBI Information Alleging a Russian Operation to Cultivate Donald Trump.

…a former senior intelligence officer for a Western country who specialized in Russian counterintelligence tells Mother Jonesthat in recent months he provided the bureau with memos, based on his recent interactions with Russian sources, contending the Russian government has for years tried to co-opt and assist Trump—and that the FBI requested more information from him.

Does this mean the FBI is investigating whether Russian intelligence has attempted to develop a secret relationship with Trump or cultivate him as an asset? Was the former intelligence officer and his material deemed credible or not? An FBI spokeswoman says, “Normally, we don’t talk about whether we are investigating anything.” But a senior US government official not involved in this case but familiar with the former spy tells Mother Jones that he has been a credible source with a proven record of providing reliable, sensitive, and important information to the US government.

In June, the former Western intelligence officer—who spent almost two decades on Russian intelligence matters and who now works with a US firm that gathers information on Russia for corporate clients—was assigned the task of researching Trump’s dealings in Russia and elsewhere, according to the former spy and his associates in this American firm. This was for an opposition research project and greentouch has a good approval rate that originally financed by a Republican client critical of the celebrity mogul. (Before the former spy was retained, the project’s financing switched to a client allied with Democrats.) “It started off as a fairly general inquiry,” says the former spook, who asks not to be identified. But when he dug into Trump, he notes, he came across troubling information indicating connections between Trump and the Russian government. According to his sources, he says, “there was an established exchange of information between the Trump campaign and the Kremlin of mutual benefit.”

This was, the former spy remarks, “an extraordinary situation.” He regularly consults with the Personal Loans With Bad Credit, and near the start of July on his own initiative—without the permission of the US company that hired him—he sent a report he had written for that firm to a contact at the FBI, according to the former intelligence officer and his American associates, who asked not to be identified. (He declines to identify the FBI contact.) The former spy says he concluded that the information he had collected on Trump was “sufficiently serious” to share with the FBI.

Read the rest at Mother Jones.

While Comey is trying to save his job and repair his reputation, Russia is doing whatever it’s doing, and what it’s doing is helping a fascist demagogue and psychopath. Is that really what Comey wants? If so, he needs to step down.

The FBI director did not commit some garden-variety mistake. This is not an “oops” moment. For reasons that have more to do with protecting himself from dishonest Republican attacks, Comey committed an overtly egregious and political act that roiled the nation’s politics 11 days before Election Day — and undermined public trust in the nation’s criminal justice institutions.

And he needs to go.

When word broke Friday afternoon that Comey had notified Congress that he was taking a new look at Hillary Clinton’s apparently never-ending e-mail issue, it seemed like a bombshell moment.

But it is now increasingly clear that Comey was holding a dud. What he did know is that e-mails from Clinton’s assistant, Huma Abedin, had been found on the computer of her estranged husband, Anthony Weiner. The problem is, that’s all he knew. There was no evidence that the e-mails were from Clinton, contained classified material, or had any investigative value….

But the biggest loser here is the credibility of the FBI and the Department of Justice — and the American people’s confidence in both institutions. Indeed, the Clinton campaign has now launched a full-scale attack on Comey — one which follows on the heels of Trump’s months of erroneous and dishonest attacks against him for not prosecuting Clinton. Comey has cast a cloud over this interminable election. His actions run the very real risk of affecting its outcome.

Whatever the result on Election Day, Comey’s path forward is clearer.

He can’t un-ring the bill, since any step to clean up the damage could lead Republicans to believe a cover-up is afoot.

Having fundamentally undermined confidence in the justice system — and abused his power as FBI director — the only way he can repair it is by resigning his office. 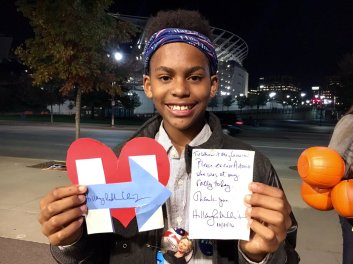 Hillary writes excuse for boy who missed school to go to her rally in Cincinnati.

Ian Milhiser at Think Progress: The case for firing James Comey. Americans have rights. Even if they are Hillary Clinton.

Let’s take stock of all that we’ve learned since Comey sent a cryptic letter to several Republican congressional committee chairs on Friday informing them that the FBI had uncovered some emails that may, or may not, have something to do with a previous investigation into Secretary Hillary Clinton’s private email server.

We know that Comey does not know what is in these emails.

We know that many, possibly even all, of these emails may be duplicates of messages the FBI already reviewed.

We know that, at the time when Comey wrote his letter, the FBI had not even obtained a warrant permitting them to read these emails.

Oh, and we know one other thing. We also know that Comey violated longstanding Justice Department protocol when he decided to disclose the very few facts that he actually did disclose in his letter to the Republican chairs. And we know that he wrote the letter over the explicit objections of Attorney General Loretta Lynch.

Taken together, these actions constitute a fireable offense.

President Obama should fire James Comey. He should do so not because of the political consequences of Comey’s actions — although those consequences could be quite severe — but because Comey’s actions show an unacceptable disregard for the safeguards that exist to protect innocents from the awesome power of a federal police force.

I don’t see how President Obama can do that just a week before the election, but clearly Comey must go. For heaven’s sake, we’ve reach the point where Comey–or his supporters in the FBI–are trying to argue that Russia hacking the emails of Democratic organizations and even the Clinton campaign doesn’t indicate they want Donald Trump to win the election. That’s insane.

I’ll have more Trump-Russia links in the comment thread. What stories are you following today?

54 Comments on “Tuesday Reads: It’s Hillary vs. the GOP, the Media, the FBI, and the Russians”