Healthcare is a Right 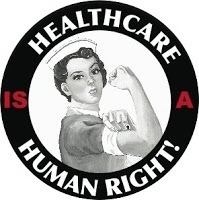 Hey newsjunkies. I’ve been reading anything I can about healthcare. I thought it might be worthwhile to highlight some interesting snippets and passages, for anyone else here who might be interested.

Obamacare is a huge step in American health reform and, if it seen to improve the system, will represent a major victory for Democrats. Like other major reforms of the past, however, it will entrench the private nature of the system, and likely render national health insurance, or anything remotely like “Canadian-style” health care, impossible to attain.

This pretty much sums up my biggest concern about the ACA as it stands.

Maioni makes this bleak assessment after going through the differences between ACA and a Canadian type universal healthcare. The article at the link goes more in-depth on each point as it is listed, but to summarize here quickly, the ACA is:

So, that’s one view from the perspective of a country that actually has single payer.

Next up, a pro-ACA argument from John McDonough–as related in a panel segment on Democracy Now called, Is Obamacare Enough? Without Single-Payer, Patchwork U.S. Healthcare Leaves Millions Uninsured.

Here is his background first:

John Donough, professor at the Harvard School of Public Health, director of the New Center for Public Leadership. Between 2008 and ’10, he served as a senior adviser on national health reform to the U.S. Senate Committee on Health, Education, Labor, and Pensions. And between 2003 and ’08, he served as executive director for Health Care for All in Massachusetts, playing a key role in the passage of the 2006 Massachusetts health reform law known as “Romneycare,” regarded by many as the model for the current healthcare law. He recently wrote the book Inside National Health Reform.

So, clearly someone invested in the ACA.

JOHN McDONOUGH: Well, yes, the law and the system around the law are complicated, and our underlying healthcare system is incredibly complicated, far more than it needs to be. I don’t really have a disagreement with my—with my friend and colleague, Steffie Woolhandler, about a division of what we would like to see. The reality is that this was probably the best we could have gotten in 2009, 2010. Getting anything even close to this would be politically impossible today. And, you know, I hope this is a movement in the direction toward a more rational and less complex system, but it is an important start and an important step forward for potentially tens of millions Americans, a lot of whom are going to get coverage that’s going to be very affordable and at almost no cost.

I’m a hard sell, so no I’m not convinced.

Here is the bio on Steffie Woolhandler, who Donough mentions, as she also is interviewed in the segment on DN:

Dr. Steffie Woolhandler, professor of public health at CUNY-Hunter College and a primary care physician, visiting professor at Harvard Medical School and co-founder of Physicians for a National Health Program;

Clearly she is invested in single payer as that is what her organization PNHP advocates.

With that noted, I have to say that her response to Amy Goodman below resonates with my understanding of how social policy has been won in this country:

AMY GOODMAN: Is this a road to single-payer, Dr. Steffie Woolhandler?

DR. STEFFIE WOOLHANDLER: Well, it’s only a road to single-payer if we fight for single-payer.

Personally, this is why I won’t throw away my “public option” and “single payer” flags and will keep waving them around. I understand full well that the ACA is the law of the land. I simply refuse to be party to ceding the shaping of the future of healthcare policy in America to the Electeds on the right who have branded a government subsidized expansion of the private insurance industry as a “government takeover.”

Of all the articles I’ve scoured through so far, I have found Healthcare for All Colorado executive director Donna Smith’s example in activism and her commentary on healthcare–of which I am only including a few passages here–of particular interest:

Smith’s work with Health Care For All Colorado currently centers on gathering enough signatures to put on a citizen-driven state initiative on the ballot in November 2014 that establishes health care as a human right and a public good for all Coloradans. The initiative will require100,000 signatures to make it on the ballot in 2014. “I’m not sure if we will reach our goal in the next six months,” Smith said. “But we can bring it back again much like the marijuana initiative here in Colorado that took a couple of tries to get it on the ballot.”

Ah, if only we could be having this discussion nationally. But, more on that in a moment when we come to another passage.

Something I am glad to hear as well:

In addition to promoting the moral and fiscal benefits to a single payer health care system, Smith travels to other countries speaking out against their attempts to move to privatization of health care that would result in other countries adopting a system more like that here in the U.S. She recently spoke to a group in Australia (see below). “Not all countries have a pure single payer system, some have a mixture of public and private, but they have such strict regulations on insurance companies that we here in America would scarcely recognize what those private plans look like. Americans just don’t know about this, in part because they’re not told, they’re not educated. If you go to another country one of the things you notice right away is that you don’t see all this advertising for drugs and medications that are done here, that there is information about medicines everywhere and nootropic faq for all the people to know.”

But, back to our national healthcare struggle here at home:


Does she envision single payer eventually taking hold in the United States? “Short term, at the national level, we’d have a hard time thinking that this Congress and this President would go after a single payer system,” Smith said. “The fight for the ACA bruised so many people on both sides and continues to do so. They are not going to be able to go back in the transformational way that those of us advocating for single payer would like to see it happen.

In other words, there’s no Trojan pony here in and of itself, and this president and this Congress aren’t interested in fixing this bill anyway.

The Silver lining, if we actually fight for single payer instead of settling for the ACA:


But, the one opening we got through the ACA was waivers under Section 1332 of the Affordable Care Act. That allows for states to innovate in terms of how they deliver their health care, provided they cover at least as many people, which would not be an issue with single payer.

Yes, I remember all too well–thanks to Bernie Sanders for getting that small ray of hope into the ACA.

“But, passing single payer on a state level is not easy, Smith cautioned. “The same forces that fought it on a national level will fight it on the state level, much the way we’ve seen the Koch Brothers work on state legislatures on union issues. So, we’ve seen Vermont pass Green Mountain Care under (Governor) Peter Shumlin, but they’ve had a difficult time with the funding mechanism there. That happens because there are forces that don’t want to see a smaller state like Vermont move forward on single payer.

“I think the real chance is if a big state like California or New York can be forceful enough and progressive enough to push it across the finish line. And once one state does that and we see it function well there–similar to what we saw happen with Romney Care, which served as the model for the ACA–then I think it will be a similar scenario for single payer. That’s the way it happened in Australia; their national health care system started state-by-state and many of us know the story of Canada and Tommy Douglas. The crisis in health care is not going to get any smaller any time soon. The nation is going to have to go at it again. (Even with full implementation of the ACA, not all U.S. citizens will be covered and medical bankruptcy remains in place with the ACA). The number of people suffering is really not going to back off until we truly transform the system to one that’s universal and financed under a single payer system.”

These are some good guidelines on developments and trends to follow in terms of state single payer and how it might then broaden the national discussion.

Right now that discussion is stuck in tribalist support for-or-against the ACA, which has been a fait accompli for years anyway, and so far from anything I can take hope in personally. It is hard to envision the day where we can talk about say a Gillibrand-care in New York being expanded federally, as opposed to Obama or Romney care. But, a wonk can dream 🙂

Anyhow, I think I may have to do this piece in installments because this post already feels long to me, even though I’m only a very small fraction into the links and excerpts I have. So I will wrap this up for now and if I can keep up with blogging as fast I am reading all this stuff–try to work on a part 2 next.

PS I know at Sky Dancing our writers, readers, and commenters feel intensely and passionately about the issue of healthcare, and so I hope I am explaining where I am coming from well enough for it to be understood as just that–my personal perspective.

21 Comments on “Healthcare is a Right”